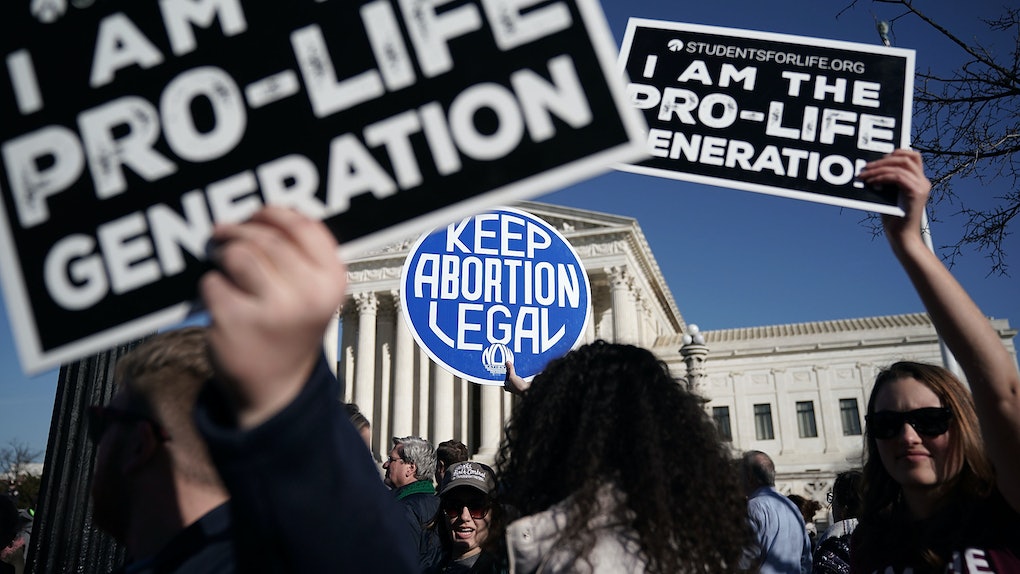 What Does Alabama's New Abortion Law Mean For Roe V. Wade? There's A Purpose To This

Another day, another abortion restriction — this time in Alabama, which on May 15 passed a wildly restrictive new law that effectively bans abortion in nearly all circumstances. With the signature of Republican Gov. Kay Ivey, the state now has one of the strictest abortion laws in the country, which might make you wonder: What does Alabama's new abortion law mean for Roe v. Wade? This isn't reassuring.

The measure, known as the Human Life Protection Act, is said to be a direct challenge to Roe v. Wade, the landmark 1973 Supreme Court decision protecting abortion rights at the federal level. The law is a near-total ban on abortion, with the only exception being if there's a health risk to the mother. It also makes it a felony for doctors to perform or attempt to perform an abortion at any stage of pregnancy. In a statement on signing the bill on May 15, Gov. Ivey called it a "powerful testament to Alabamians’ deeply held belief" regarding life. Barring legal challenge, the law will go into effect in six months.

The Alabama law, while troubling on its own, could also have major implications at the national level. It seems more than likely that the law will be challenged, as has been the case surrounding other recent anti-abortion laws — which is likely a part of the plan. Some anti-abortion advocates hope that the legal battles over the laws' legality will make it to the Supreme Court, where they hope the court's conservative majority will overturn Roe.

In the lead up to Tuesday's vote on the law, Alabama's Lt. Gov. Will Ainsworth made it clear in a statement on May 9 that the state intends to eventually challenge Roe. The statement said in part:

It's important that we pass this statewide abortion ban legislation and begin a long overdue effort to directly challenge Roe v. Wade. ... Now that President Donald Trump has supercharged the effort to remake the federal court system by appointing conservative jurists who will strictly interpret the Constitution, I feel confident that the U.S. Supreme Court will overturn Roe and finally correct its 46-year-old mistake.

In the event that Roe is overturned, the law would likely go back to the way it was before the landmark law — meaning, a patchwork of different abortion laws across the country, as states are left to decide for themselves whether or not to permit abortion and under what circumstances. Some states, like New York, are already working to enshrine abortion care into their state laws, meaning that people in those states wouldn't see a change. Other states, however, have "trigger" laws in place that would automatically ban abortion in the absence of Roe.

"Experts estimate that approximately half the states would immediately ban abortion, meaning the women in those states would have to travel to 'haven' states," Carole Joffe, a researcher at Advancing New Standards in Reproductive Health (ANSIRH), and professor emerita in sociology at the University of California, Davis, tells Elite Daily via email. Per reproductive rights think tank the Guttmacher Institute, as of May 1, 18 states have laws in place that could be used to restrict abortion if Roe was no longer valid. But even that could prove to be risky. Georgia, for example, recently passed a bill banning abortion after a fetal heartbeat is detected, usually at around six weeks of pregnancy — before many people even know they are pregnant — under which people who travel to other states to receive abortion may face prosecution.

However, Joffe believes that even if abortion does make it to the Supreme Court, it will probably take some time. She tells Elite Daily that the Supreme Court probably won't take up Roe before the 2020 election because it could backfire given that polls "consistently" show about 70% of Americans want the decision to stay in place. "Overturning Roe before the election would be a disaster for Republicans," she says, adding, "After that, it is not so clear."

The first steps towards a legal challenge may already be in the works. The American Civil Liberties Union (ACLU) of Alabama said on Twitter after Tuesday's vote that it would be taking legal action against the measure.

In the meantime, there's something you can do, too, according to Joffe. "Vote! And encourage others to vote!" she says. "It is crucial to vote in state legislative races, where most of the anti-abortion action is." She also recommends supporting local abortion funds, which can help women get the help they need, from getting to clinics to assisting with childcare costs.

Looks like this fight is just getting started. Stay tuned.