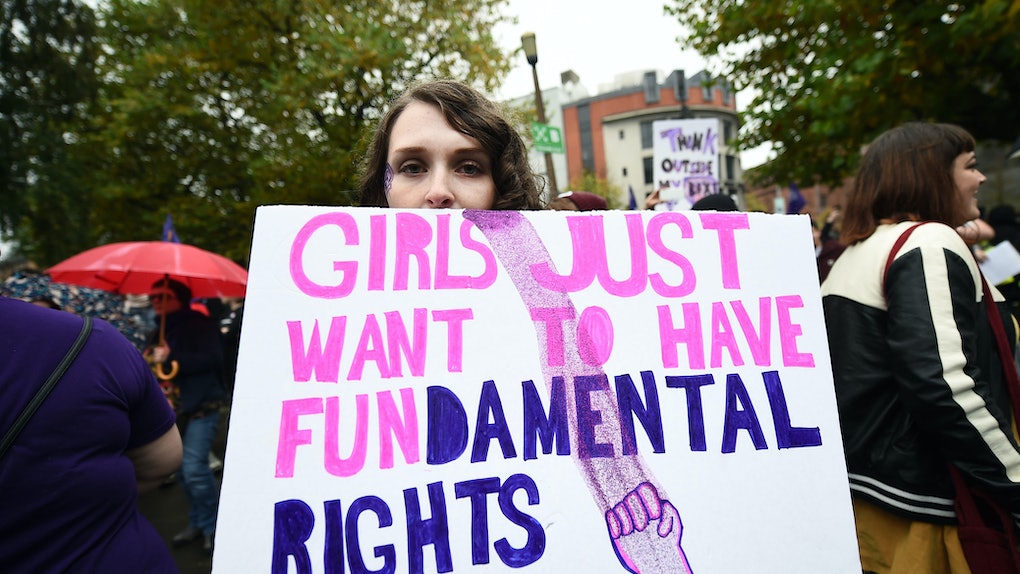 Georgia finally did it. On Tuesday, May 7, Republican Gov. Brian Kemp signed into law a controversial bill that bans abortion after a fetal heartbeat is detected. While the move earned some praise, it was also greeted with strong rebuke from abortion-rights groups and advocates, as the move would outlaw abortion before many people even know they're pregnant. Just check Twitter. Many of the tweets about Georgia's new abortion law are even promising to challenge the rule.

The measure, HB481 (aka the "heartbeat bill"), prohibits abortions after six weeks of a pregnancy — before many people even know they are pregnant. There are only three exceptions to the legislation, which is set to go into effect on Jan. 1, 2020, per Georgia Public Broadcasting: when the life of the mother is at risk and in cases of rape or incest. Acknowledging the potential backlash ahead before signing the bill, Kemp said, per ABC News, “We will not back down. We will always continue to fight for life."

Kemp's decision to sign the measure into law makes Georgia the fourth state to sign such a rule into law in 2019, along with Ohio, Mississippi and Kentucky, according to Reuters. (It's worth pointing out, though, that Kentucky's law was immediately challenged by the American Civil Liberties Union and blocked temporarily by a federal judge, who ruled that it was potentially unconstitutional, per The New York Times.) It also seems to be a part of a larger effort to overturn Roe v. Wade in the Supreme Court.

Some may be cheering, but other people are seriously not happy about that.

Dr. Leana Wen, the president of Planned Parenthood, vowed on Twitter to "fight" the bill.

The American Civil Liberties Union (ACLU) of Georgia declared in a press release shared via Twitter that it would act to "block this assault on women's health, rights, and self-determination."

Former Georgia gubernatorial candidate Stacey Abrams, who narrowly lost to Kemp in the 2018 midterms, connected the bill to the issue of voter suppression. "If leaders can silence Georgians’ voices at the ballot box, they can ignore Georgians’ voices when in office. We will fight back in court and at the voting booth," she continued.

One Twitter user highlighted a viral video of state Sen. Jen Jordan (D-Georgia) discussing the bill back in March. Simon repeated Jordan's claim that Georgia women will reclaim their "rights and claim their seats." She added, "That's a promise."

I mean, these tweets are heated.

Abortion rights advocacy group NARAL Pro-Choice America is also pushing back on the legislation with a new campaign.

In a statement to Elite Daily on May 7, the organization said that it has partnered with Planned Parenthood Southeast Advocates (PPSE) for a campaign called #ReclaimGeorgia, which works to "lay the groundwork for unseating out-of-touch, anti-choice state legislators who voted for a bill that banned abortion before many women even know they’re pregnant." It says it will educate voters about the actions and votes of anti-choice legislators from the past session, as well as anti-choice politicians going into the 2020 elections through direct mail, digital ads, door-to-door canvassing and making phone calls. Want to get involved? NARAL has several ways you can help out on its website.

NARAL Pro-Choice America President, Ilyse Hogue, said in the statement that Kemp's move "signifies a new day in the fight for reproductive freedom and justice." She continued:

Let this be a signal to Kemp and anti-choice legislators all across the country: we are here, we are not going away, and our rights are not up for debate.

You can help NARAL and other organizations in the fight for abortion rights with a simple donation. Sounds like they may need it. Get ready.