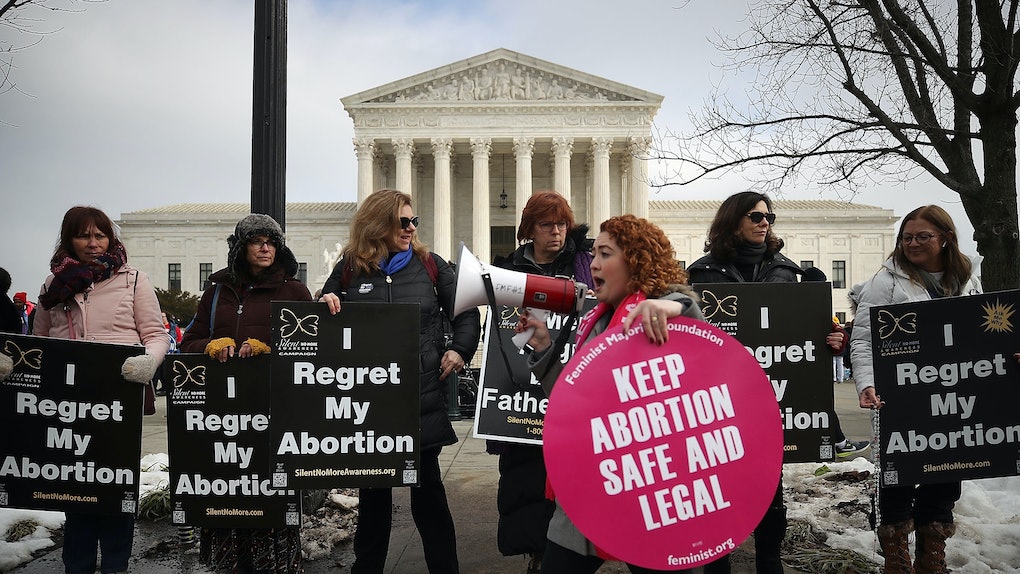 It's been a grim few weeks for abortion rights. After widespread debate and controversy, the Alabama state Senate voted on May 14 to pass one of the most restrictive abortion laws in the United States. The bill appears to be designed to conflict with the Supreme Court's landmark 1973 decision Roe v. Wade, which establishes the right to an abortion, in hopes that legal challenges will make it to the highest court and conservative justices will overturn the ruling. But it's not happening without a fight. Here's where to donate to support reproductive rights in Alabama, because anything helps.

Donating will go a long way, given how serious the bill is. Known as the Human Life Protection Act, the bill is a near-total ban on abortions, with no exceptions in cases of rape or incest. The only exception is if there's a risk to the mother's health. It also makes abortion a criminal offense. While women would not be criminally liable, doctors who perform or attempt to perform an abortion procedure could face anywhere between 10 years and 99 years behind bars. The bill is currently awaiting a signature from Republican Gov. Kay Ivey, who has not publicly committed to signing it, but lawmakers are expecting her support. A spokesperson for the governor, who has expressed anti-abortion views, said in a statement to The New York Times that she would “withhold comment until she has had a chance to thoroughly review the final version of the bill that passed.”

Already, many pro-choice groups even vowing to fight the bill. But legal challenges aren't exactly cheap, so they'll need people to lend some help. Here's how.

After Tuesday's vote, the ACLU of Alabama announced that it plans on taking legal action against the measure, along with the national ACLU and Planned Parenthood.

According to its website, the ACLU does not receive government funding and totally relies on private donations, foundation grants, bequests, and court-awarded legal fees in successful cases, so a donation will definitely help go a long way. Head here to make one.

If helping individuals is more your speed, you can also think about donating to an organization that helps people access abortion care directly. This organization, a member of the National Network of Abortion Funds, helps Southerners and their families by providing financial assistance and sharing resources "needed to be empowered in securing reproductive health services," according to a statement on its website. The organization operates in Alabama, Florida, Georgia, Mississippi, South Carolina, and Tennessee. Want to donate? You can make a contribution through its website here.

The Planned Parenthood Federation of America (PPFA) is all about educating people about health care options, and advocating public policies that secure access for women, which seems key in these times. You take get in on the action with just a couple of clicks here.

Want to send your funds right to advocacy? The Planned Parenthood Action Fund (PPAF) is the advocacy arm of Planned Parenthood, and works to educate legislators, pursue legal action, and mobilize advocates. You can donate here.

Another member of the National Network of Abortion Funds, the Yellowhammer Fund has been providing funding for people seeking care at abortion clinics in Alabama since 2018. It even helps with travel costs, lodging expenses, and more — whatever it takes to "further the goals of reproductive justice," as stated on its website. Click here to get started.

Whether you can only give a small donation or have money to blow, remember that anything helps. It takes a village.