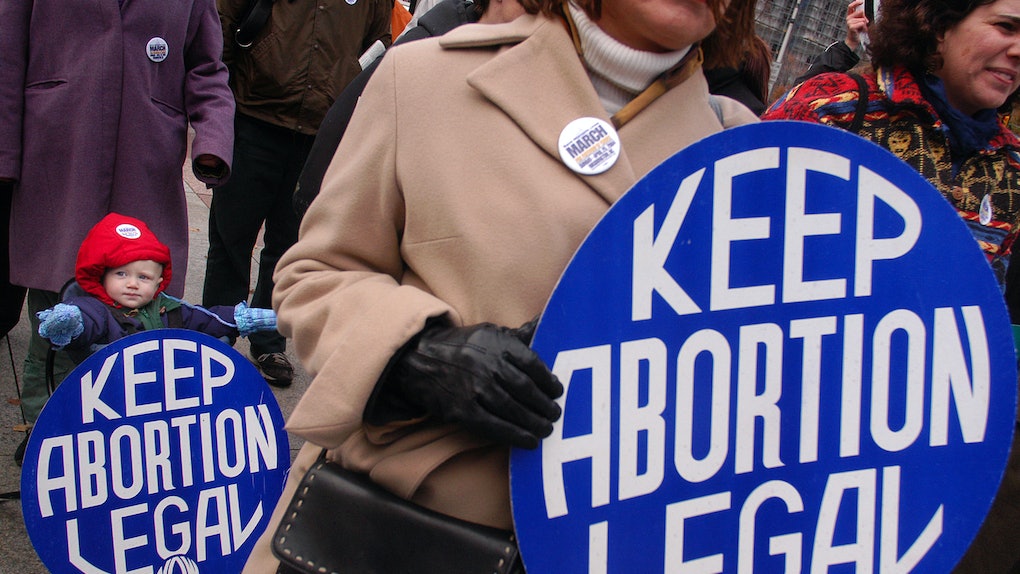 So, it happened. On May, 14, the Alabama state Senate voted to pass one of the strictest abortion laws in the United States, which means it's headed to Republican Gov. Kay Ivey's desk to be signed into law. Alabama's new abortion law is a near-total ban on abortion and even makes performing the procedure punishable by decades in jail. The law, should it be signed by the governor, will be the most restrictive abortion regulation in the country, per CNN.

The bill, known as the the Human Life Protection Act, passed in a 25 to 6 margin, according to The Hill. The measure bans abortions in almost all instances, including in cases of rape or incest. The only exemption is in cases where there's a health risk to the mother. Doctors who conduct or attempt to conduct an abortion could face anywhere from 10 years to 99 years in prison, although women would not be criminally liable. Gov. Ivey has not publicly committed to signing the bill, but many are expecting her support. In a statement to The New York Times, a spokesperson for the governor said that she would “withhold comment until she has had a chance to thoroughly review the final version of the bill that passed.”

The legislature's vote on the bill was initially scheduled for May 9, but it was pushed back after legislators tried to take out a provision that would allow abortions in cases of rape or incest without holding a procedural vote. The Senate chamber erupted into chaos, with lawmakers arguing with and screaming at one another over the attempt.

The move appears to be an effort to challenge the 1973 landmark Supreme Court case Roe v. Wade, which establishes a legal right to abortion at the federal level. Since states have the right to regulate abortion, provided it doesn't cause an "undue burden" on patients, some anti-abortion advocates have been trying to push those laws as far as they can in hopes that a legal challenge will make it to the Supreme Court and allow the court's conservative majority to overturn Roe.

Alabama's Lt. Gov. Will Ainsworth said in a statement on May 9 that the goal of the legislation is indeed to reverse the Supreme Court's decision. The statement said in part:

It's important that we pass this statewide abortion ban legislation and begin a long overdue effort to directly challenge Roe v. Wade. ... Now that President Donald Trump has supercharged the effort to remake the federal court system by appointing conservative jurists who will strictly interpret the Constitution, I feel confident that the U.S. Supreme Court will overturn Roe and finally correct its 46-year-old mistake.

Reproductive rights advocates are not happy about this. Dr. Yashica Robinson, board member of Physicians for Reproductive Health, says in a statement shared with Elite Daily by email that such a measure will have a "disastrous effect on the health and well-being of Alabamians."

"Physicians will be unwilling to help patients in need, even when continuing pregnancy is detrimental to a patient’s health, or potentially fatal, out of fear of being scrutinized by the criminal justice system," the statement continued.

The American Civil Liberties Union (ACLU) also pushed back on the legislation, saying in a statement to The New York Times that it will challenge the bill in court, and argue the state unlawfully restricted access to abortion.

"Passing bills that they know will be struck down in federal court are a waste of millions of taxpayer dollars that could be going to address the urgent needs in our communities," the statement reads. "Ignoring those needs in favor of scoring political points is an irresponsible use of their power and privilege."

The Alabama bill is one of several efforts in states around the country to restrict abortion more and more heavily. Most recently, on May 7, Georgia Gov. Brian Kemp signed a bill that would ban abortion after six weeks, before many people even know they're pregnant, in a move that prompted outrage from abortion rights advocates.

We'll see what else happens from here.