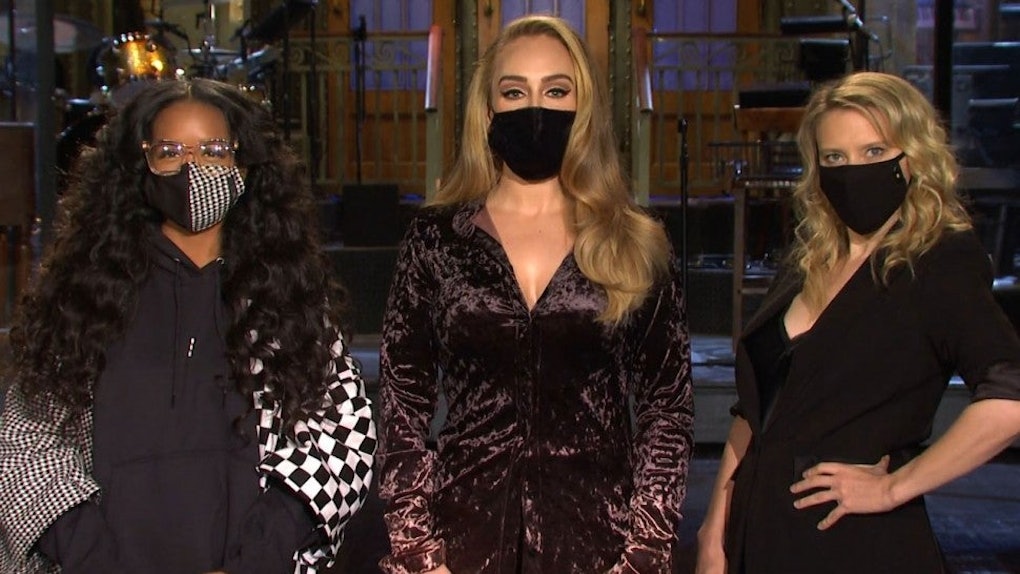 If you've ever seen an interview with Adele, you'll know she has an incredible sense of humor. It's no wonder she landed a hosting gig on the next episode of Saturday Night Live. Over the years, the singer has performed several times on the show, but her Oct. 24 appearance will mark the first time she'll be emceeing the night. Prepare for a lot of laughs, because Adele's American accent in the new SNL promo teases the hilarity that's sure to come.

The clip, which NBC posted a day before Adele's episode, shows the "Hello" singer alongside musical guest H.E.R. and SNL cast member Kate McKinnon. The stars donned face masks as they introduced themselves to viewers. "I'm Adele and I'm hosting Saturday Night Live this week with musical guest H.E.R." the singer said. McKinnon asked which "her" they were referring to, leading the ladies to try and clarify, but in the end, all three women declared themselves the musical guests.

The trio then tried another take for the promo. This time, after Adele's introduction, McKinnon attempted her best British accent, trying to imitate the singer's speech. "Right, so tune in. It's fit to be wicked," the comedian remarked, causing Adele to look at her in embarrassment. "I'm sorry. Bad idea," McKinnon told her.

"Oh my God, no worries girlfriend," Adele reassuringly responded in an American accent. "OK, now that is good," McKinnon said.

Adele nailed the impression, so in case you haven't seen the promo yet, take a look below.

Adele's upcoming appearance on SNL will be the first time she'll be on the show in five years. Shortly after releasing her third full-length album, 25, in November 2015, she debuted her single "When We Were Young" on the program.

Although she hasn't confirmed when her fourth album will drop, fans speculate Adele will announce her new record some time during SNL's Oct. 24 episode. Rumor has it she'll release the project the week following her appearance on Friday, Oct. 30. If so, the day will be a huge one for music, as Ariana Grande will debut her sixth album on the same day.

Whether she announces an album or not, fans won't want to miss Adele on SNL. Judging by the promo, it's going to be a fun night.