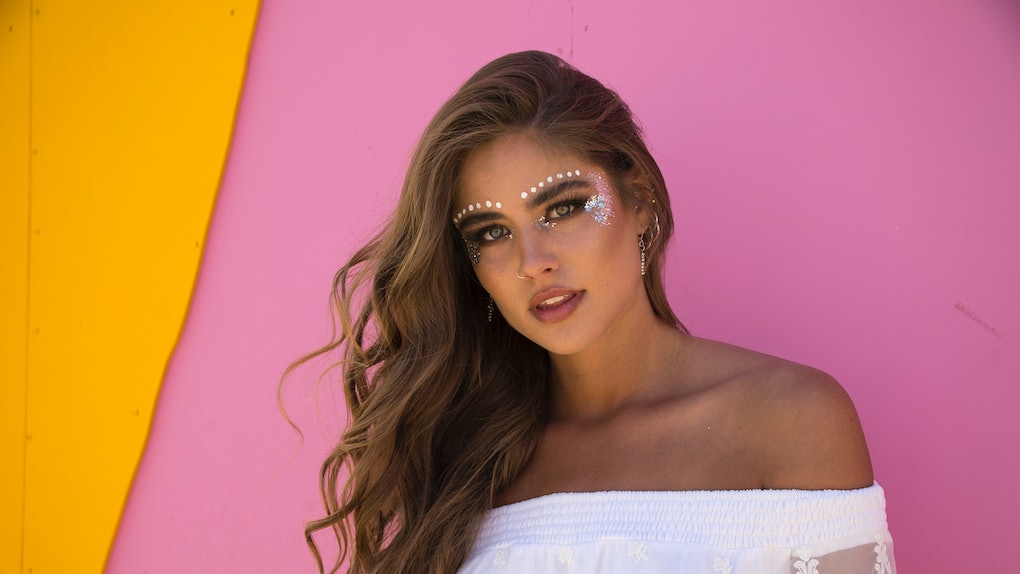 Spring isn't the only season that's sprung, and you're ready to have the time of your life this weekend at a festival. You bought your tickets what seems to be years ago, but now it's finally here! You and your besties are waiting for the work week to be over, and jet-setting as soon as possible. That Friday feeling takes on a whole new level when there's memories this legendary to be made. Odds are, you've already pack all your outfits and accessories. You're looking to stand out in the crowd, and these festival temporary tattoos might just be the last-minute thing you need to get so that you're totally glowing at Coachella.

Seriously, nothing adds a little bit of sparkle to your outfit better than a flash tattoo. You're already going to be in such a golden state of mind thanks to all of the music, so why not seal the stylish deal? Maybe you'll even get a real tattoo during this unreal weekend to commemorate such an amazing time surrounded by your squad.

Some will be stars to speak to the moon child in you, and others will be colorful prints that bring out your free-spirited side. Music festivals shine such a spotlight on fashion, and you'll see a thousand girls in flower crowns and the like while you're there. You know that the chances your favorite artist will see you in the crowd are slim, but with one of these 10 flash tattoos, you'll stand a fighting chance. Did somebody say glow up?

This weekend you'll be seeing stars — and I'm not just talking about the ones in the sky that illuminate the night like the neon lights from the stage. If you're lucky, you'll be in the presence on Beyoncé and Eminem, and all of those artists that you've only ever seen from the other side of your television screen while you were watching the Grammys. So, you'll want to purchase a pack of these temporary tattoos shaped like stars, so that you can fit in with such a stellar crowd. Put them in the corners of your eyes, or down your wrist to shine just a bit brighter.

You're so looking forward to this weekend, so be sure to sport a set of arrows as temporary tattoos to always keep you in that mindset. The truth about music festivals (that they don't tell you on social media), is that the days are actually really long. You'll be on your feet for awhile, and probably need to stop for at least a few water breaks throughout the afternoon. Your adrenaline will surely keep you going well into the shows that last through midnight, but you're bound to get tired at some point, too. These arrows will keep your spirits oh-so-high.

You and your besties are going to be birds of a feather this weekend, floating around this festival. Music has a way of bringing out the best in all of us sometimes, and you'll be in your element surrounded by fans who know all your favorites, too. In fact, you'll meet a lot of people just by starting conversations over the unknown acts that take the stage before the big headliners. Those shows are worth seeing as well, and you won't want to sleep on getting to the venue a bit early and snagging a prime spot. A feather will keep you free-spirited throughout it all, because let's be honest, crowds aren't always ideal.

Peace and love, am I right? This weekend is going to be rosy, and not just because of the rose-colored lenses in your sunglasses that bring out all the John Lennon vibes in you. Despite the chaos of the crowd, everybody is coming together for one thing — music. You'll be overwhelmed a bit by how beautiful that fact is, and how you can feel it in the atmosphere. Imagine any concert or show you've ever been to, when everybody puts their lighters and flashlights up and waves them in the air. In that moment, everything is seemingly so OK. These flash tattoos will instantly put you in that feel-good mood.

Put all of those bracelets and bangles away for a day, and break out some bohemian flash tattoos instead. You'll be accessorizing in all sorts of ways this weekend. Maybe you invested in a flower crown, or a big hat that will also block out that summer sun. You've put a lot of thought and time on Pinterest into creating the perfect look for each day. But, you also don't want to be bogged down in the desert. These boho bands will take the place of all that chunky jewelry you were considering, and add something a bit cosmic to your style, too.

May Bloom By Jess Phoenix, $6, Tattly

Stay wild, flower child. You could wear a crown this weekend and fall into the sea of other florals in the crowd, or you could rock this flash tattoo that's a bit more colorful. Truth is, you have a bold personality, and your festival style is going to show off your one-of-a-kind spirit. You're really hoping that you'll get in front of at least one camera, but you can't be boring if that's the case. These flowers will bring out all the summer vibes that have been just hanging out during those April showers. They'll have you blooming your best against those ferris wheel backdrops.

When life gives you lemons, make lemonade — or listen to Beyoncé's Lemonade. That works, too! If you're a serious fan of Queen Bey, or just looking to add something a little fresh to your festival fashion, then this lemon flash tattoo will surely bring on the tang.

The biggest stars have made it to stages like Coachella because they were doing something different. Each has an essence that attracts millions of fans to their social media feeds and stadium shows. Channel all of that in your look, and bring something less basic to live your best festival life.

Some live by the sunlight, but you'll be dancing until dawn with all of your favorite stars during festival season. The week leading up to the experience of a lifetime, you probably tried to squeeze in a couple extra naps or so. You need all the energy you can get for a weekend of camping in the desert with your crew, and running around the grounds.

You'll spend your afternoons wandering around the fair rides, and maybe try and get into a couple of Coachella parties. You've seen it all on social media, and can't wait to make it your reality. But, without a full moon, you might not feel as daring. So, be sure to scoop this tattoo up sooner rather than later!

You have all of your fingers crossed that this is going to be everything you've ever hoped for, and have probably checked to see if all the stars will be aligning in the universe this weekend. But, you don't need bright lights or even a golden temporary tattoo to be glowing for Coachella. You just need a perfect palm tree to remind you to go with the flow, and surround yourself with only the good vibes.

Your experience will go by so quick and you'll want to say yes to every adventure. Packing and picking out looks for the time of your life might not have been such a breeze, but all of the planning is pretty much done by now. Other than getting one of these temporary tattoos for your festival season a little last-minute, you're more than ready to hit the road and get glowing.

More like this
23 Instagram Captions For Sunflowers That'll Instantly Brighten Up Your Day
By Jasmine Vaughn-Hall
The Home Edit x Day Designer Collection Is Full Of Products To Keep You Organized
By Rachel Chapman
BTS' Inkbox Temporary Tattoos Collection Is "Dynamite"-Inspired, So Take My Money
By Marisa Casciano
Stay up to date