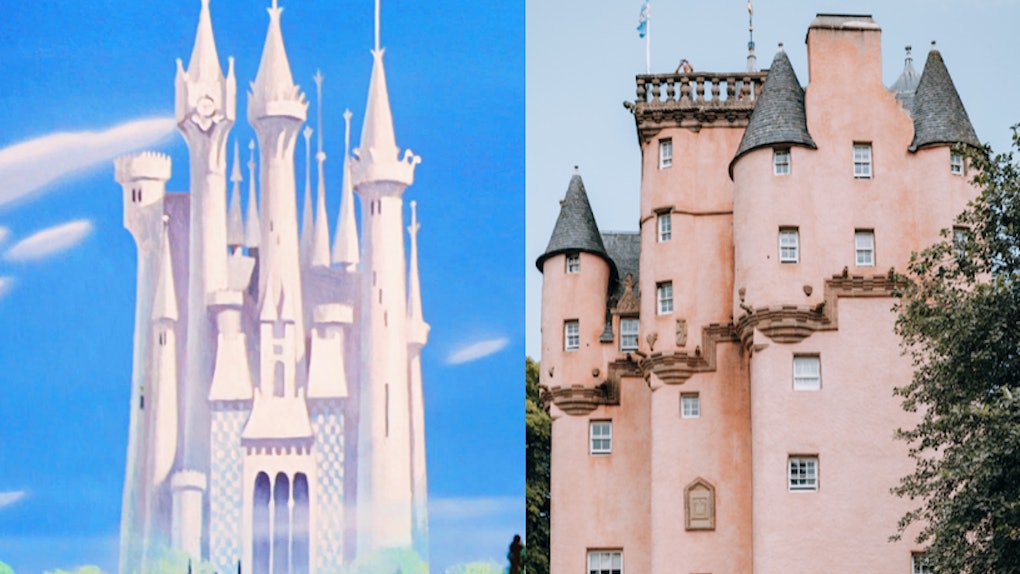 Disney has plenty of inspirational movies in its arsenal. Take Mulan, for example — rather than conform to society's demands, the hero of the tale goes to war to protect her father. Then there's Merida in Brave. No love interest, no damsel in distress, no problem. But as much as Disney has inspired me — along with millions of others through the years — have you ever thought about what inspired Disney? Because, let me tell you, there are so many Disney princess castles inspired by real-life places.

If the Genie from Aladdin could grant me one wish (and I wasn't allowed to ask for more wishes), I know what I'd ask for. I'd want the ability to teleport anywhere in the world — wherever, whenever, and any place connected to Disney would definitely be on my bucket list.

Of course, there's Disneyland, Disney World, and all of those other Disney-themed parks, but I'm not talking about the obvious. I want to visit and explore the places that inspired the famous dwellings in Disney's animated masterpieces. Have you ever heard of Admont Abbey in Austria? It houses the oldest monastic library in the world, containing over 70,000 books. It's basically the real-life version of Belle's library in Beauty and the Beast and a total bucket-list location.

You better believe all of these real-life places that inspired Disney princess castles are on my list as well. And by the end of this, I bet you'll have nine new locations to add to yours.

Alcázar de Segovia, which literally translates to “Segovia Fortress,” is said to be the inspiration for Snow White’s castle in Walt Disney’s first full-length animated feature film, Snow White and the Seven Dwarfs. (Elite Daily reached out to Disney to confirm the rumor, but did not hear back by the time of publication.) However, the fortress' uses could not be more different than the fictional structure's.

While Snow White’s abode in the 1937 production housed her and her wicked stepmother, the Evil Queen, the alcázar has served multiple purposes since its origination in the 12th century. “Its functions: first fortress, then royal palace, state prison, Royal College of Artillery and Military Historical Archive,” according to the historical monument’s official website.

Then again, Snow White was essentially imprisoned by the Queen (until she tried to have her raven-haired stepdaughter killed), so maybe the two locations aren’t so different after all.

Though Neuschwanstein Castle in Bavaria, Germany is heavily rumored to be Disney’s biggest influence for the renowned building in his 1950 classic, Cinderella, per Travel + Leisure, the National Trust for Scotland (NTS) regards Craigievar Castle as the monument to hold that honor.

“Discover the beautiful pink castle said to be the inspiration for Walt Disney’s Cinderella Castle,” the official NTS site boasts as the first bullet point on its overview of the bibbidi bobbidi beautiful location in Aberdeenshire, which is about two and a half hours north of Edinburgh. (Elite Daily reached out to Disney to confirm the rumors Craigievar was the inspiration, not Neuschwanstein, but did not hear back by the time of publication.) A millennial pink dream fit for a fairy tale, if I do say so myself.

Yes, the same castle that’s heavily rumored to be Disney’s biggest influence for Cinderella’s home with Prince Charming also reportedly served as the inspiration for Princess Aurora’s not-so-humble dwelling with Prince Phillip — both in California’s Disneyland and in the cartoon feature.

A rep for the theme park confirmed to the Orange County Register that Sleeping Beauty Castle was inspired by Neuschwanstein Castle, which is located in the German Alps. The iconic Fantasyland structure opened in July 1955, the same day Disneyland opened to the public; the animated production hit theaters nearly four years later, in January 1959.

The island castle known as Château de Chillon has served many purposes throughout the years: from the 12th century to the late 18th century, it was a fortress, an arsenal, a prison, a summer residence… you name it. One of its most notable achievements in recent history, however, was nothing of the sort. Remember Prince Eric’s stunning residence in the 1989 edition of The Little Mermaid? It was "inspired by the equally beautiful" Chillon Castle, according to Condé Nast Traveler. (Elite Daily reached out to Disney to confirm this, but did not hear back by the time of publication.)

Not going to lie, if I were Ariel, I would’ve wanted to be a part of that world, too. Wait, what am I saying? I still do.

Imagine being a guest at the place that inspired Disney’s Beauty and the Beast — because it’s possible… kind of. Cháteau de Chambord reportedly served as an inspiration for both the 1991 tale (as old as time) and the 2017 live-action edition starring Emma Watson, according to production designer Sarah Greenwood, who worked on the latter film. (Elite Daily reached out to Disney to confirm this, but did not hear back by the time of publication.) While spending the night in the vicinity may not be in your future, you can certainly spend a day at the chateau. (FYI, the French gardens are breathtaking.)

To really get the entire Beauty and the Beast experience, you can head cross-country about six hours east to the Alsace region of France, which was reportedly the vision behind Belle’s "little town." Riquewihr, a town in Alsace, was even added to one of Adventures by Disney's European river cruises in 2018 to "make guests feel as though they’ve stepped into Belle’s hometown from the movie."

The interior and exterior of the Sultan’s palace in the fictional land of Agrabah in the 2019 live-action edition of Aladdin was a “real mishmash” of influences, production designer Gemma Jackson told Entertainment Weekly ahead of the movie’s premiere. But the same palace in the 1992 animated classic is rumored to be loosely based on the Taj Mahal, the famed Indian mausoleum. (Elite Daily reached out to Disney to confirm the rumor, but did not hear back by the time of publication.) That means you don’t need to travel to a whole new world to see it.

If you look at side-by-sides of Tangled’s fictional island kingdom of Corona and the island of Mont Saint-Michel in France, you may see some similarities. Laurent Ben-Mimoun, a visual development artist for the 2011 movie, said in an interview with AnimatedViews.com that the idea was to “have a renaissance castle on an island, reminiscent of Mont Saint-Michel.”

The end product, however, was pieced together from multiple places. “The references were mostly from the French Renaissance,” revealed Ben-Mimoun. “The chubby towers from [French cháteau] Chenonceau, for example, were inspiring.”

Yup, I’ve got a dream and it’s definitely to see this place up close.

The Hôtel de Glace, which literally translates to Ice Hotel — and is exactly what it sounds like — was a springboard for Frozen director Chris Buck. During a 2014 visit to the location, months after the production’s theatrical release, Buck told ScreenSlam he first checked out the hotel about five years prior “to do research, to figure out what a structure of ice and snow would look like.”

And I guess the establishment couldn’t just let it go because, from January through most of March 2014, guests were able to book what the hotel referred to as the “Frozen Suite.” The space was modeled after Elsa and Anna’s bedrooms and was, of course, sculpted out of ice and snow.

There were reportedly multiple castles that served as inspiration for Merida’s home with her large family. Among that list are Eilean Donan Castle and Dunnotar Castle, both of which are located in Scotland.

“Though Brave is set in a fictional medieval Scotland, Pixar's animators were deeply affected by the real country's raw beauty and rich heritage, visiting Scotland both in the summer of 2006 and late 2007,” according to the official site for Visit Scotland.

I'm assuming I don't need a magic mirror to tell me you've added nine new locations to your bucket list; they're definitely all on my list of dream vacations, too. But, to quote Ariel: "Who says that my dreams have to just stay my dreams?" And I agree.

More like this
8 Disney-Themed Charcuterie Board Ideas To Add Some Pixie Dust To Your Movie Night
By Rachel Chapman
Will BTS' Camping Collection Restock? Here's What To Know About The Helinox Collab
By Marisa Casciano
Away's Travel Accessories Collection Brings Comfort To You In Any Destination
By Marisa Casciano
Stay up to date