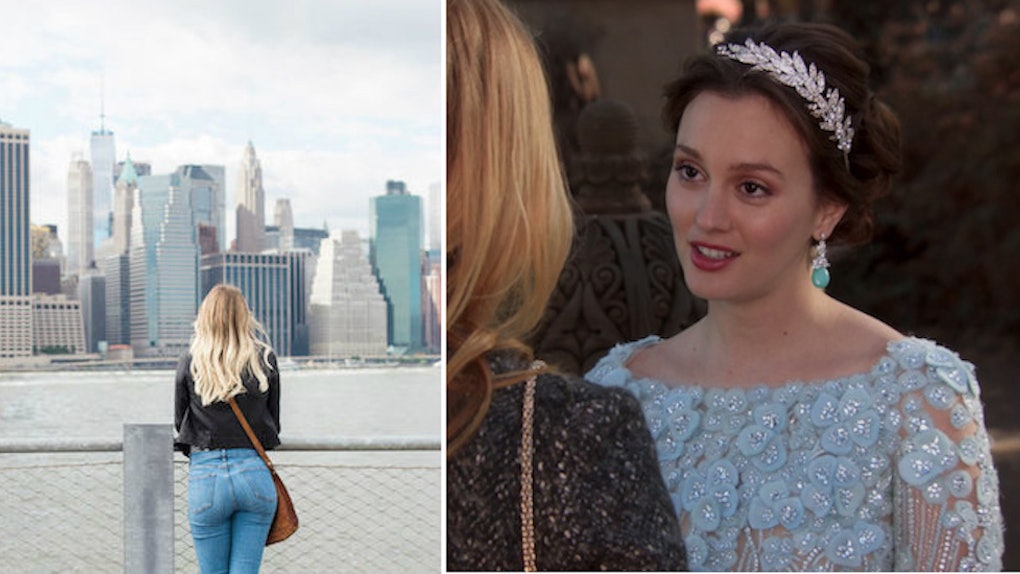 So, you want to be a socialite? First, you need some connections with high-end fashion designers. Then, you need to plan some elaborate schemes. Planning an extravagant party might not be a bad idea, too. Let's be honest, though: you're already exhausted thinking about it, and would much rather spend a weekend in the city seeing sights from the show. Touring the Gossip Girl locations in NYC will truly bring out your inner Blair Waldorf. (Watch your step, though — there can only be one queen bee.)

What would it be like to be one of Manhattan's elite? Well, you've already gotten a pretty good glimpse at it. You've been there for every Blair and Serena photo shoot, and the times when they when shopping after school. Somebody would send in a tip, and suddenly, everyone's worlds would be turned upside down. Chuck would be hiding out in his suite at the Empire Hotel, and Nate would be looking as handsome as ever. You should've known that there is always something happening on the Upper East Side.

Now, you want to see where all of the drama went down for yourself. A weekend in New York City will be enough to see the sights, although you probably won't get any sleep. These eight Gossip Girl locations will be a must for you, now that you've memorized every single line of the show. Don't forget your headband — and who am I? Well, that's a secret I'll never tell (until the last episode). XOXO.

1. The Metropolitan Museum Of Art

What's the most popular location in New York City for Gossip Girl fans? Personally, I'd say the steps of the Metropolitan Museum of Art. This museum is full of art that's well worth your time. But, it wouldn't be right if you didn't pretend you're Blair Waldorf and take your place for a picture. You'll imagine what it would be like to hand out invitations to Manhattan's elite parties, and create wild schemes. Has anyone seen my headband?

Grand Central Station is where it all began. You remember watching the first episode like it was yesterday. (Actually, let's be honest: You watched the pilot a few hours ago, because you're watching the entire series again.) Serena was standing at the top of the stairs looking out over the sea of people. In the crowd was Dan Humphrey, who she didn't know existed at this point. The next scene, you're meeting Blair on the steps of the Met.

You'll likely take the train into the city for the weekend, and get to check this spot off right away. Be sure to look up at the ceiling, and get out of the way of commuters who are in a rush to get to their trains. Maybe even stand where Serena was and pose for a picture, like a true Gossip Girl fan.

Let's be honest: You could always use a little more Chuck Bass in your life. Sometimes you got sick of Serena when she flaked on another party, or Dan when he was being an angsty writer back in Brooklyn. But, Chuck and his mysterious ways never got old. In fact, most episodes, you wanted to jump into the screen and just tell him everything was going to be OK.

You became an even bigger fan of his existence when he confessed his love to Blair. It's only right that you walk by the Empire Hotel and maybe check out an event or grab a drink on the rooftop, if you're 21 or over.

4. The Constance Billard School For Girls

When you're packing for your weekend in New York City, you'll likely squeeze a couple of headbands into your suitcase. After all, you idolize Blair Waldorf, and have a bow that will match every piece in your wardrobe. You'll walk down Fifth Avenue, and do some shopping. Don't forget, that during all the drama, your favorite characters went to school. Yes, I'm talking about The Constance Billard School for Girls. *Cue the squeals.*

To non-Gossip Girl fans, this spot is actually The Museum of the City of New York. So, if you're putting it into your GPS, know that's where you're actually supposed to go. You can hang on the steps, or go inside and walk the halls. Next stop: Colombia University, am I right?

During your Gossip Girl filled day in New York City, you're going to need a snack. You could stop for macaroons, or even a slice of pizza down in Brooklyn. But, wouldn't you rather channel Dan and Vanessa at Dylan's Candy Bar? The answer seems pretty simple to me.

This spot is located on Third Avenue, and is a sweet addition to any Gossip Girl self-guided tour. Be sure to bring your camera and your sweet tooth, OK?

Let's talk about the Lotte New York Palace Hotel. You might have to be a star on Gossip Girl or one of Manhattan's elite to live this luxurious lifestyle. But, being in the presence of Serena van der Woodsen's home will be a moment for the books. Especially if you're in the city during the holidays, you'll feel the magic and be able to see the iconic Christmas tree.

During the show, this hotel was the scene of so many Blair and Serena moments. They bonded over boy drama, and there was that time that Dan met Serena outside, when she was waiting for Gossip Girl, herself. Now, you're shaking your head and realizing you should've know right then and there the identity of Manhattan's most secretive member.

Has anyone seen Dan Humphrey? Word on the Upper East Side is that he's writing a book in his loft based in Brooklyn. The area is most known for its bridge and artsy walls. But, this neighborhood is probably the most iconic part of town thanks to Little J and her family (in my personal opinion).

Every Gossip Girl fan will want to get out of Manhattan for a second, for a sneak peek at where the boy-next-door got his start. Before Dan saw Serena standing on the steps at Grand Central Station, he was just hanging here. The rest is history, huh?

A day in New York City means you'll be walking down Madison Avenue, and checking out the art exhibits. But, as a Gossip Girl fan, you also should make Central Park a must-see. After a long day of walking around the city and dodging taxi cabs, relaxing on the green will be such a relief. Not to mention, you'll be hanging out in the exact location where Chuck and Blair got married in the final episode.

It was a moment that had the Blair Waldorf wannabes of the world on an emotional rollercoaster. She stunned in an Elie Saab gown and said, "I do," seconds before the cops showed up. You probably wish you could go back in time and try out for an extra role in that scene. Ugh. At least you can scope out where everything went down, amongst a few other Gossip Girl locations in The Big Apple.

More like this
The 'Friends' Experience In NYC Sleepover Opp Will Make You Say, "Oh. My. God."
By Rachel Chapman
9 Best Disney Instagram Accounts To Follow When You're Daydreaming About The Parks
By Rachel Chapman
HomeGoods' Hideout Contest Treats You To A Relaxing Solo Getaway & Free Merch
By Marisa Casciano
Stay up to date