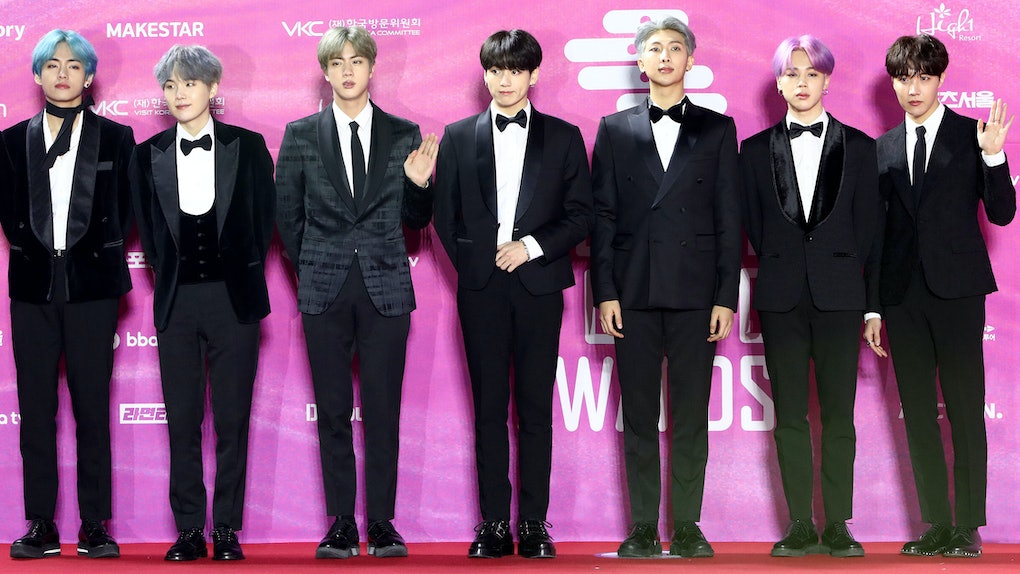 There’s no question that BTS is causing a huge cultural and musical shift in Hollywood. The K-Pop band is the very first Korean music act to make significant strides in the mainstream American music industry and loads of celebrities are responding in kind. Take Ed Sheeran, for example, who is such a huge BTS fan that he’s even working on a collaboration with them. But there are actually so many more of your favorite celebs who love BTS just as much as you do and some of their names might even surprise you! So, here’s a list of eight celebrities that are BTS fans.

As I mentioned above, Ed Sheeran is one of the many celebs who's been totally forthcoming about their his for BTS. When a fan asked Sheeran if he'd ever collab with BTS during an interview with Heat World, Sheeran revealed that he really liked BTS. So much, in fact, that he gave them a song to record.

"I actually wrote a song that I think they might be messing with," Sheeran revealed. I heard this the other day, but yeah, I really like BTS. I think they’re great.”

Check out the moment below:

Yes, the Jimmy Fallon who’s friends with every legendary celebrity on the planet and rubs shoulders with the likes of Michelle and Barack Obama. Fallon is such a fan of BTS that he shared lots of laughs, hugs, and compliments with all the guys when they appeared on his show back in September 2018. Actually, Fallon and Jimin shared a special connection because their names are so similar and they have so much respect for each other!

Fallon even declared his love for Jimin on Twitter with a tweet that read, "Everyone has a different fav. It’s almost obvious who’s mine. Love, Jimin Fallon #BTSonFALLON"

Can you say bromance?

I bet you didn’t think you’d see John Cena’s name on this list! But it’s true — Cena’s a big K-Pop fan. He absolutely loves BTS and gushed about their amazing success when speaking to Entertainment Tonight in July 2018.

"When I became aware of the BTS phenomenon, it hit me by storm. I listened to their music. I enjoy their music," he told ET at the time. "But I really enjoy the following and the passion they create. I think that's something special. And especially for them to be the first to take K-pop and make it global, that truly is a testament to how well they do their job. So I'm just a fan of what they do and the passion that they evoke out of people. I think it's really special."

Cena also revealed which member of BTS is his favorite. Can you guess who it is? It’s J-Hope!

"J-Hope is my favorite, just because he's got a little street cred like myself," he told ET.

Charlie Puth has been a long-time fan of BTS. His love for the group goes all the way back to February 2017 when Jungkook covered "We Don’t Talk Anymore" — Puth’s collaboration with Selena Gomez. In response, Puth tweeted, "I really like this Jungcook."

That tweet became a meme thanks to the misspelling of Jungkook’s name.

Later in 2017, according to Soompi, Puth revealed in a radio interview that he liked BTS’ music and he wanted to apologize to Jungkook for misspelling his name.

"I like BTS, I like Jungkook too,” he said. “I just like them, I think they’re a fantastic band. I want to meet them in person one day and apologize to Jungkook for mispronouncing his name."

Jungkook and Puth's connection came full circle when he performed "We Don't Talk Anymore" and "Fake Love" with the band at the 2018 MGA Awards.

Yep, Camila Cabello is a fan, too! In a December 2017 interview with Teen Vogue, the 21-year-old singer opened up quite a bit about what she loves about BTS, their music, and their work ethic.

"I think they're super talented and cool. I saw them perform at the American Music Awards, which was their debut on American television, and I know everybody was super, super excited,” Cabello said during her interview with Teen Vogue. "A lot of my fans are their fans, too. They also mentioned 'Havana' in this one interview! It was one of my favorite performances from the show. They put a lot of work into their choreography and into their performance. And you can tell that they really work hard, and I respect that a lot."

Check out their AMA performance down below:

Ansel Elgort is a huge BTS fanboy, so much so that he looked like a proud dad watching his seven sons perform during the 2017 American Music Awards. Look:

He also talked about how much he loves BTS on Instagram:

And he also wishes he was one of them:

Yes, you read that name right! BTS reaches everyone. That’s how powerful they are. In a recent interview with Ellen DeGeneres, McConaughey revealed that he loves BTS just as much anyone else out there! Take a look:

Joe Jonas and the members of DNCE love BTS so much that they’d definitely collaborate with them if given the chance. They even said so on Twitter back in 2017:

This is a very cool list of people who love BTS and it just goes to show the range the band has in capturing an audience. Amazing!

More like this
The 25 Sexiest Comments Made By Celebrities On Their Partners' Instagrams
By Corinne Sullivan
Bryce Hall Is Reportedly Being Sued For Starting A Fight At An L.A. Restaurant
By Brandy Robidoux
Lizzo's TikTok About DMing Chris Evans On Instagram Is Truly Hilarious
By Abby Monteil
Stay up to date