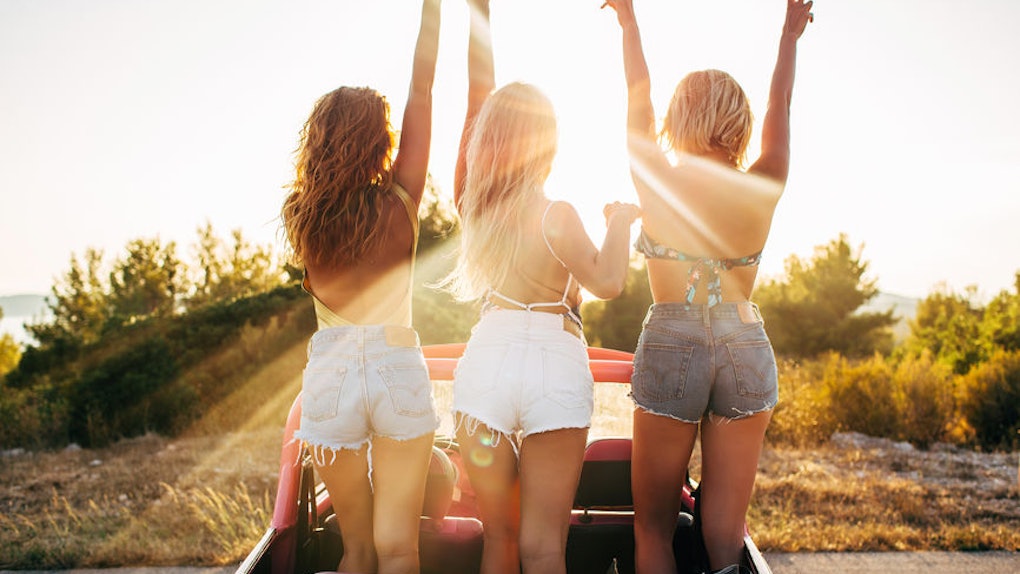 Thank goodness for your girl crew. They've been there through thick and thin, and life wouldn't be nearly as interesting without them. There have been many Galentine's Day brunches, and late-night phone calls asking for advice. Now that you're grown, there will be the bridal showers and so many "firsts." From your 20s to your 30s, you may realize a few ways your friend group changes. For one, you won't be eating pizza on the floor of your apartment anymore. It's a whole new chapter. Are you ready for it?

Growing up has been a whirlwind. You've somewhat figured out how to be an adult, and have likely paid for rent or gone grocery shopping on your own. In college, you may have relied on your roommates when you weren't sure how long you should put that chicken in the oven, or for snacks at the library. But now, in the real world, you're calling on all of your girls no matter how far away they may be to make sure you're still on the right track.

Taking less risks sort of comes with the territory, and you'll notice that your girls won't be taking chances every second they get. You're all likely going to be more settled down, or have a better handle on life itself. These seven things will be too true, when you look back and see just how your girl crew has changed over the years.

1. You're Getting Engaged, Instead Of Just Dating

The days of dating will be left behind for you and your girl crew. Being 20-something meant kissing a lot of frogs before you found your significant other, but you somehow survived all of the swiping left and right, and may be getting married now. You're going to go to your bestie's bridal shower and bachelorette party, and will likely help with all of the wedding planning, too. When you were kids, you dressed up and pretended to throw bouquets, and now it's actually becoming a reality. Funny how that works, huh?

2. You're Living With Your SO, Instead Of Your Girls

As Monica and Rachel put it in Friends, "It's the end of an era!" In your 20s, you'll probably live with so many roommates. That apartment in the city has been the dream, but includes lots of loft-mates and sometimes small spaces. You wouldn't trade that chapter for the world, though, and likely love living with your best friends.

In college, you were right across the hall from each other, and now you go shopping at IKEA and grab coffee at the spot downstairs on the reg. By the time you're in your 30s, you'll likely be living with your significant other instead. You're all grown up, after all.

3. You're Staying In, Instead Of Going Out All The Time

As you get older, the bar scene becomes a lot less fun. You could spend your Saturday nights in the company of strangers and tequila sunrises, or you could snuggle up and watch a movie with your girls instead. If we're being honest, the second that I hit the post-grad life, the answer to that question was quite clear.

As you get into your 30s, you'll likely be busier and might not see your girls as often as you'd like. So, when you do, it shouldn't be in a crowded club where you can't hold a conversation. You have some serious catching up to do, and your house has snacks! Yup — staying in it is.

4. You're Taking Weekend Getaways, Instead Of Road Trips

Once again, life gets somehow even busier when you're in your 30s. You've settled into your career, and working all week long. Maybe you're going to start having kids, and then you need to plan for soccer practices and family meals. You're just a lot less free with your time, and so week-long road trips down the California coastline just aren't in the cards.

Instead, you and your girl crew will be having weekend getaways. You'll head to the spa, or find a cute cottage on Cape Cod to rent out for a few days. Those kind of trips are just more realistic at that point. But, the lesson then is to follow all of your wanderlust right now.

5. You Have Your Career Figured Out, Instead Of Job Searching

Honestly, you're happy that you're adulting a bit more when it comes to your career. Job searching can just be so stressful, and you're feeling lucky to have landed a work wife in your 30s. Your girl crew is suddenly feeling more professional, because everybody is on their own path to success. You're surviving, and dare I say, thriving.

When you were a bunch of 20-somethings, you were still figuring out what you wanted to do. "What do you want to do with the rest of your life" is a pretty loaded question. You'd all have heart-to-hearts during drives around town and beach bonfires. Somewhere along the way, you all ended up where you were supposed to be. That's as comforting as ever.

6. You're Getting Nostalgic, Instead Of Constantly Making New Memories

As you get older, it's natural to be more nostalgic. You're living more and more of your life, and making so many memories as you go. It's only right that you'd look back at them with some bittersweet emotions. On the one hand, you and your girl crew are happy that those days in high school happened. You'll tell the same stories over and over between your 20s and 30s, and they'll never get old.

However, on the other hand, you're all wishing you could go back in time and relive those moments. With such busy schedules, and life being so demanding, there's less time for being together. You may have a late night date at the diner just for old times' sake.

7. You're Adults, And Not Just Sort Of Adulting

Let's be honest: there's a very big difference between adulting and being an adult. Adulting is being 20-something and doing things that an adult would do, like meal planning or paying rent bills every month. Being an adult means that those activities come a lot more naturally, and that you're comfortable with handling some of life's curveballs.

Your girl crew will most noticeably change when you realize that you've made the jump from adulting to adult. This doesn't mean you've all become fluent in politics, or have stopped ordering bottomless mimosas at brunch. Rather, it's noticing that you all have some experience now, and can do so much more for yourselves. Just keep in mind — the one thing that will never change is how much you all love each other between your 20s and your 30s.