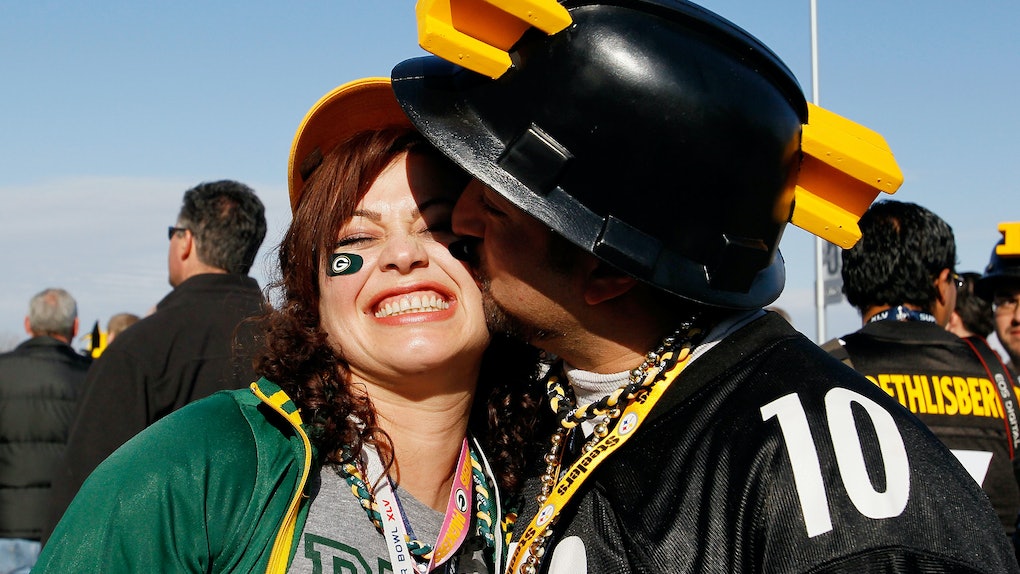 7 Super Bowl Proposal Stories That Will Tackle You With Emotion

Amidst the confetti, fireworks, and colorful marching band — the players on the winning team aren't the only people scoring a Super Bowl ring. If you and your boo are total football fanatics, these Super Bowl Proposal Stories will sack you with awwws and maybe even give you some inspiration. Whether you and your partner root for the same team or have decided to agree to disagree, when it comes to popping the big question on game day, everyone can feel like a winner.

Of course, a public proposal, like pretty much everything else in dating, is something that should be previously discussed before jumping on in. You may think you know exactly what your partner likes and dislikes, but hitting them with a "Will you marry me?" in front of a ton of people without their prior consent could make them seriously uncomfy. But if you are you boo are on the same page, asking them to tie the knot on game day could be just the right amount of sporty and sappy.

When it comes to Super Bowl proposals, these seven stories will make you do a touchdown dance.

1. Take It To The Streets

I live in Philadelphia. I watched the Eagles win in a punk house with no shower curtain, and I walked 7 seven miles to Broad Street, where the community meeting (pictured above) was being held. People were drinking in the street, standing on top of garbage trucks, and crawling up traffic lights. It was the 'Birds first win and let me tell you, love was in the air. (Don't tell native Philly people I called the Eagles the "Birds.")

After the Giants 2012 Super Bowl Victory, player Greg Jones went for his own major win, by proposing on field to long time partner, Amanda Piechowski. Piechowski was so moved by her beau she shed happy tears the entire proposal, to which Jones reportedly joked he didn't know how long she was going to cry for.

I watched every local news interview I could find of these two, (also from Philly. Go Birds!) and they reportedly met in an Uber Pool, and had a love affair catalyzed by the success of the Eagles. Pictured in front of city hall, with fireworks and music in the background, he popped the question without getting down on one knee as there was reportedly, too much horse poop.

Just after Patriots QB, Tom Brady racked up his fifth Super Bowl ring, this Massachusetts boy gave his boo her first. Among friends at a super sweet Super Bowl Party, after yet another Patriots win, this couple is totally cute and totally New England. Here's hoping Dunkin' Donuts sponsors their wedding (my dream).

After the 2017 Super Bowl in Texas (which is why everyone is wearing summer clothes and not snow suits. Yes, I Googled it.), this Massachusetts man really locked down the Pats win by locking down his long time girlfriend (who said yes!).

Vlogger and hairstylist, Megan Leigh, got her own ring during the 2018 Super Bowl when her partner popped the question, holding a glass of wine. Sporting Eagles Toms and space buns, Leigh is looked trendy, sporty, and totally smitten.

If you and your boo are planning on spending the rest of our lives together and are major sports fans, a Super Bowl proposal may be a total touchdown. From storming the streets to parties with friends to popping the questions at your favorite dive bar, Super Bowl proposals can make for total field and couple #goals.