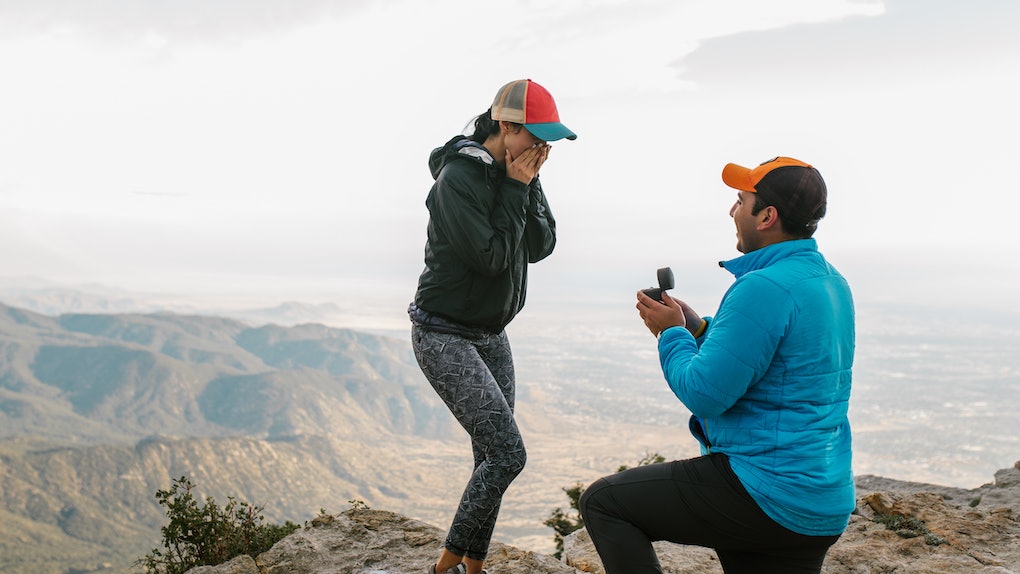 Here's Why Grand Romantic Gestures Are Only Good If They're Actually Romantic, According To Experts

Something about the ability to peek into the intimate moments of the lives of people we don't interact with on a daily basis has made public displays of affection — ahem, attention — seem to be a cornerstone of internet content. Of course, grand romantic gestures probably happened long before the rise of social media. Perhaps the cave people literally moved mountains to woo their boos. It seems that these days, however, big gestures are becoming NBD: Special moments are to be shared between you, your boo, and both of your social media followings.

Let me say this: There is nothing wrong with being in love, with showing that love in a public or grandiose way, or wanting to use social media however which way that you want to use social media. A public proposal, a sexy declaration written in the sky, copious amounts of flowers sent to your boo's work — if you and your partner are both into it, have at it. It's OK to use money, time, or a flash mob. What can turn quite dicey is using a public display or a grand gesture to single your boo out, put them on the spot or make yourself look like Edward Cullen, in place of taking accountability during the day to day.

"If you ignore your partner most of the time and then try to make up for it with grand gestures they might feel a bit hollow or too much too late," relationship and wellness coach Shula Melamed, MA MPH tells Elite Daily. "Grand gestures can be effective but employing them to play 'catch up' all the time could end up backfiring and your flowers will end up in the garbage."

Your boo may see through an attempt to use a grand gesture to make up for bad behavior or not being an intentional and supportive partner. Perhaps an everyday gesture, like ordering your boo an Uber to work or taking care of them when flu season hits, are everyday ways to show someone that you care. Dating someone can be made up of smaller, thoughtful actions throughout the week.

When thinking of romantic gesture as a form of apology, it's difficult not to think of goddess and rap icon Cardi B being interrupted onstage during her own performance at the Rolling Loud festival in December 2018. The spectacle had the taste of Kanye/T-Swift 2009 VMAs, yet under the guise of romance. Melamed says that grand gestures, such as Offset storming Cardi's stage with flowers as a means to apologize and beg to be "taken back," can be coercive to the recipient of the gesture — especially if the recipient haven't consented to a big display.

"What was notable about the Offset-Cardi B incident was that he took a moment that was her's (performing as one of the hottest performers right now) and made it about him," Melamed says. "It made me think about how relationships play out in the public eye. Would she have put it on the ‘Gram if he surprised her at home?"

According to Melamed, that public display could have been less about Cardi's own comfort and well-being and more about Offset's ego. Apologizing in front of a crowd can seem like an easy way to gain public sympathy. "If they apologize in front of an audience, they know that not only will there be witness to their dedication, but there will be an audience pulling for them," Dr. Joshua Klapow, Ph.D., clinical psychologist and host of The Kurre and Klapow Show, tells Elite Daily. "The grand gestures that many men engage in are often done consciously to make more of an impact, but subconsciously out of fear of rejection."

A crowd of people can place pressure on the recipient to gracefully accept the gesture. "If you want to apologize in the most intimate, meaningful, and manly way, then do it by yourself, alone and in a place where you are at risk of not getting the outcome you desire," Dr. Klapow says.

While it may seem less #instaworthy, a sweet convo in bed, before you've brushed your teeth and still having morning breath, or a walk in the park, without paparazzi and millions of balloons can be equally as romantic and thoughtful as a grand public gesture. They can also make for a more honest conversation, as no party will feel pressure to perform in a certain way. "For as much as we like to be creative with our expressions of emotions, in the end — the grand gestures often kill the grand intention," Dr. Klapow says.

Think of The Office's Andy Bernard giving 12 Days of Christmas presents to Erin, which left her bruised and covered in birds. Or the guy that proposed to his partner at the end of the 2018 New York City Marathon during her 16th mile. If your grand gesture is going to take attention away from your boo (hello, she was literally running a marathon), it may be worth thinking of a way to let them have their moment. Perhaps, consider creating a new moment for the both of you to share, rather than inserting yourself into their spotlight.

Of course, it's OK to love attention. It's even OK to yearn to be on a sporting event's "kiss-cam!" But it's necessary to talk about the role of public displays in your relationship, before springing a romantic firing squad at your boo's work party. Discussing the role of grand gestures doesn't mean no surprises. It can be as easy as, "Are you into big romantic gestures?" or "Is it OK to send things to your work?" Establishing healthy boundaries about the role big gestures play in your relationship is important for ensuring everyone's wellbeing. It can help you to avoid putting them on the spot, or putting time and effort into a display that was well-intended, but not well received.

When it comes to romantic gestures, as my 10th grade English teacher would say about thesis writing: It's less about the "How?" and more about the "Why?" Are you stopping traffic because you think you're supposed to? Are you spending your last paycheck because you want to create a situation where it's unlikely that your partner will say "No?" Whether it's Thai food in bed or renting the entire Museum of Natural History, romantic gestures are the most romantic when they're done because it's what you and your partner both want, on or off the 'Gram.