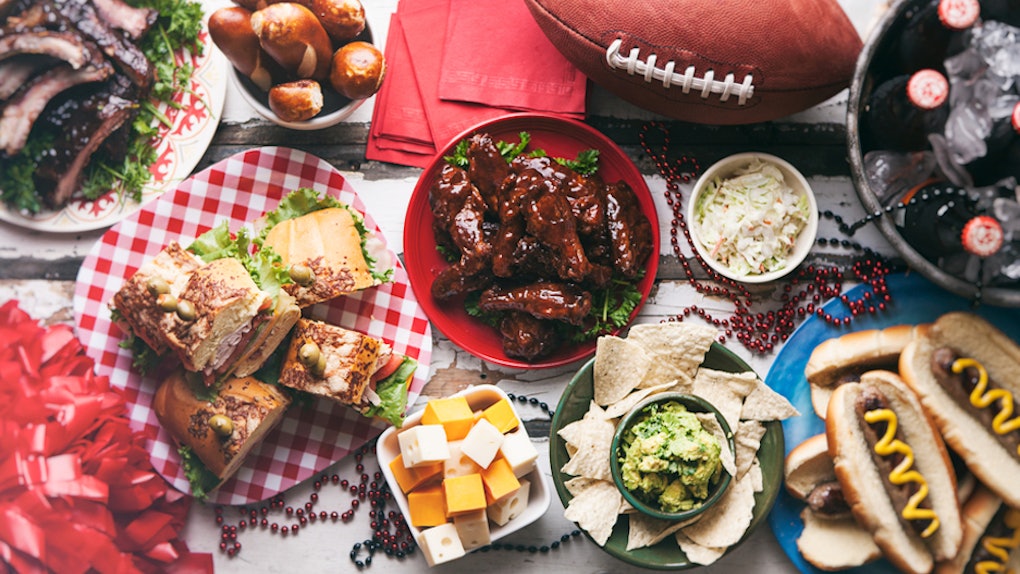 7 Super Bowl Party Themes, So You Don't Have To Just Wing It

Touchdown! It's officially the end of football season, which means you need to place your wings order now. The Super Bowl is one of the biggest events in sports, attracting thousands of fans to their TV screens and into chilly stadiums to cheer on their team. Some people aren't in it for the sports, but rather the unreal snacks (I'm so guilty of this.). From spinach artichoke dip to cheesy potato skins, can you really blame them? But, if your pals are coming over to your place this year, don't just stock up on chips and salsa. One of these Super Bowl party themes will put you right in the end zone every time.

This Sunday, the scaries won't be quite as real. The Super Bowl calls for surrounding ourselves with rowdy sports fans and friends, lots of beer, and having a ball. It's the one time of the year we voluntarily sit through commercial breaks and disable our mental ad blockers. Everyone will be talking about the funniest ones tomorrow, and so you strategically load your plate up with nachos before the Budweiser one comes on. Sure, there's always that five minute break before halftime while they're setting up the show. But, you wouldn't want to miss a minute of Justin Timberlake bringing sexy back.

If you want to really go the whole nine yards and show your party people a good time, don't just wing it. These seven Super Bowl party themes will surely score you the title of most valuable player.

This might seem a little cliché, but the Super Bowl is the perfect time to throw a sports-themed party. Anything and everything on your snack table can have a little more spirit. Buy some yellow napkins and call them foul cards, or make a concession stand sign so your guests know exactly what's on the menu.

Maybe you'll get extra creative and arrange your snacks in the shape of a stadium, or just keep it simple and use tape to turn those beer bottles into footballs. A quick search on Pinterest will give you the best DIY ideas for this party, and turn something slightly expected into a total game changer.

You can never go wrong with a pizza party. It's the tastiest theme of them all! This year for the Super Bowl, swap out that nacho cheese for a slice of 'za with some mozzarella on top. Order a bunch of different pies for you and your pals, and try a different kind with every commercial.

If you're looking for something easy, this style of party will be perfect for you. Just provide some plates and maybe a few snacks on the side. Something so cheesy will always steal a pizza our hearts, so you'll surely be making the right play.

Are you part of the green party? If you're rooting for the Philadelphia Eagles, you'll want your squad to be surrounded by only one single color this Super Bowl. You've spent the whole season making sure you stuck to your pre-game rituals, and now more than ever you need to show your spirit.

Throw on your jersey and whip up some guacamole or any other green snacks that will get your squad ready for the big game. No matter what the scoreboard reads, you can be sure that you didn't fumble on your friends.

On the other hand, if you're a New England Patriots fans, you'll be sporting a much different spectrum at your Super Bowl party. A patriotic theme doesn't have to be saved for those summertime beach bashes. Your team loves the red, white, and blue — so you best have a snack table that's showing off the stars and stripes just the same.

Everyone will be huddling up around pepperoni pizzas and getting in spirit with a blueberry-filled sangria. This isn't your team's first time on the Super Bowl field, and with a theme like this, your party and that next pass will definitely go off without a hitch.

Let's talk lagers. Your Super Bowl party will probably already have some beer if you're 21 and up, so why not make that the theme of the night? You've heard of the Beer Olympics and probably cracked a few cold ones during your various tailgates this year. But, the Super Bowl is the main event, and you'll want to be sporting your best stouts for the occasion.

Have all your friends bring something different, and clink your bottles to another season of football coming to a close. Maybe even turn the event into a drinking game. If you're so not into sports, you'll find some fun in scoring your own kind of field goals.

Believe it or not, it's still winter. All of those cold brews might have made bundling up a little more bearable, but the Super Bowl sits right in the heart of one of the chilliest months of the year. If you live in New England, you know that snow is never really out of the question in February. But, you can really make the most of it by throwing a party filled with snowflake-shaped cookies and channeling that chilly forecast with your friends.

The players will be sweating on the screen, and you'll want to warm-up in your own way. A winter wonderland theme will be unique and unexpected for your game-ready guests. Some call it a blizzard, in football they call it a blitz.

In college, this party theme is commonly known as the "workout bros" one and is a staple of almost every weekend. You and your crew won't want to sign up for any cardio on Super Bowl Sunday (Seriously, leave that up to your squad on the screen.), but snacking can totally require some stretchy pants.

Break out the sweat bands and a casual pair of sneakers. At the end of the day, we shouldn't forget that football is very much a sport. Showing your support with a fitness-themed party with your friends will turn you into your team's true number one fan.