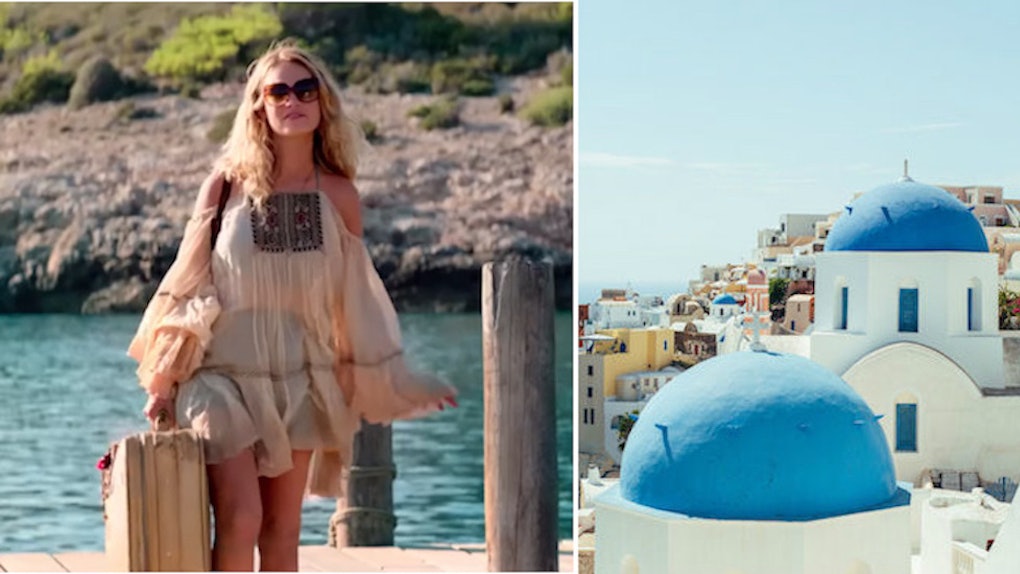 7 Places In Greece Every 'Mamma Mia!' Fan Should Visit, Because Here We Go Again

Mamma Mia! Here We Go Again officially comes out on July 20, and I'm already so excited. Like most of my favorite romantic comedies, I've watched the first film over and over. I know every single lyric to "Dancing Queen," and am expecting the sequel will have another soundtrack full of ABBA jams, too. Let's be honest: You wish you could've been there when they filmed that iconic scene with Meryl Streep skipping by the beach. The places in Greece every Mamma Mia! fan should visit will be a complete daydream. They are well-worth taking a trip to those beautiful islands in the Mediterranean.

Personally, I just want to know: What in the world happened to Donna?! The trailers show that this second movie will go back in time to that summer when her free-spirited character constantly fell in love and tried to figure out life. But, up until this point, they've been unclear about her current whereabouts. They show Sophie roaming around the cobblestone streets with her family and friends, announce that she's pregnant, and even Cher makes an appearance. We need answers, people!

For now, though, you may just want to scope out some new destinations for your bucket list, that are completely inspired by the movie. There's nothing quite as sweet as stamping your passport, except for maybe watching your favorite romantic comedies. These seven locations in Greece will be a must for every Mamma Mia! fan.

Set your sights on Skopelos if you truly want to feel like you're living in the world of Mamma Mia!. This island is actually one of the primary locations for the first movie, according to IMDB, so you'll be able to recreate a lot of your favorite scenes.

From the second you land, you'll be in awe with the bright blue water and maybe find some spots to be particularly familiar. You'll see the cliff sides where Donna poured her heart out to Sam in song, and will likely find yourself humming, "Mamma Mia."

Next to Skopelos, is another island where Mamma Mia! was filmed, called Skiathos. By now, you probably know that no matter where you go among the Greek islands, it's going to be beautiful. Every place comes with stunning towns, lush greenery, and lots of incredible seafood. But, this spot is best known for its beaches and vibrant nightlife, according to Visit Greece.

While you're there, you'll definitely want to spend at least an afternoon at Banana Beach or Lalária Beach. Your social media will have a sun-kissed glow after you post some photos from this paradise.

I wouldn't be surprised if Santorini isn't already on your bucket list, but odds are, you still haven't bought a plane ticket. You've been waiting for the perfect time to follow your wanderlust, or are still trying to find the best kinds of travel buddies to take on this trip. Girl, it's time you get yourself to the Greek ASAP.

You'd love to soak up the sunsets with your significant other, or explore and do some shopping with your main squeeze. If you're being honest with yourself, this place would probably be otherworldly, and you spend most of your days at work daydreaming about such an unreal destination.

Mamma Mia! might not have been filmed in Mykonos, but if you're hopping around the Greek islands, you'll definitely want to make a stop. You could settle for those usual pool parties and brunches, or go somewhere that's movie-worthy with your besties. The decision seems pretty easy to me.

Some of your favorite travel and lifestyle bloggers have already been roaming around this exquisite place, and you've heard about its epic nightlife. One vlogger had her bachelorette party here, complete with a scavenger hunt around town and lots of sunny days. That's honestly #goals, if you ask me, and you'll want to gather your girl crew, too.

Corfu is a destination where you can experience architecture and history right in the center of town. During the day, you'll want to check out places like the Achillion Palace or even a few museums to learn about the atmosphere and what you're walking by, and soak in every bit of the sunshine. Like the rest of the Greek islands, there are beautiful beaches everywhere you look, and you'll definitely spend some time relaxing before continuing your adventure at the night club at The Pink Palace, too.

All of the Greek islands seem so romantic, with the white houses and saturated skies. But, quite possibly the most attractive atmosphere you'll find is in Rhodes.

Out of all the islands, this is one of the biggest, with an impressive amount of beaches you can visit, and villas that'll be the setting for your very own movie-like adventure. For Mamma Mia! fans like yourself, you'll be hoping to meet your very own Sky, or maybe even a rough-around-the-edges character like Bill while you're out and about in the Mediterranean. Seriously, sign me up for this trip, and the next casting, OK?

Last, but certainly not least, is the island of Crete. With a bunch of hiking trails, infinity pools that seem to stretch out to the sea, and boats rides that you can take out into the surrounding area, you'll truly never be bored. Not to mention, you'll feel like you're part of Mamma Mia!

I think some of us love romantic comedies because they're always taking place in such beautiful places around the world. Mamma Mia! was filmed in Greece (as you know), and Forgetting Sarah Marshall makes us laugh while showing off everything Hawaii has to offer. Traveling to such places is just a must, especially when there are even more movies on the way.