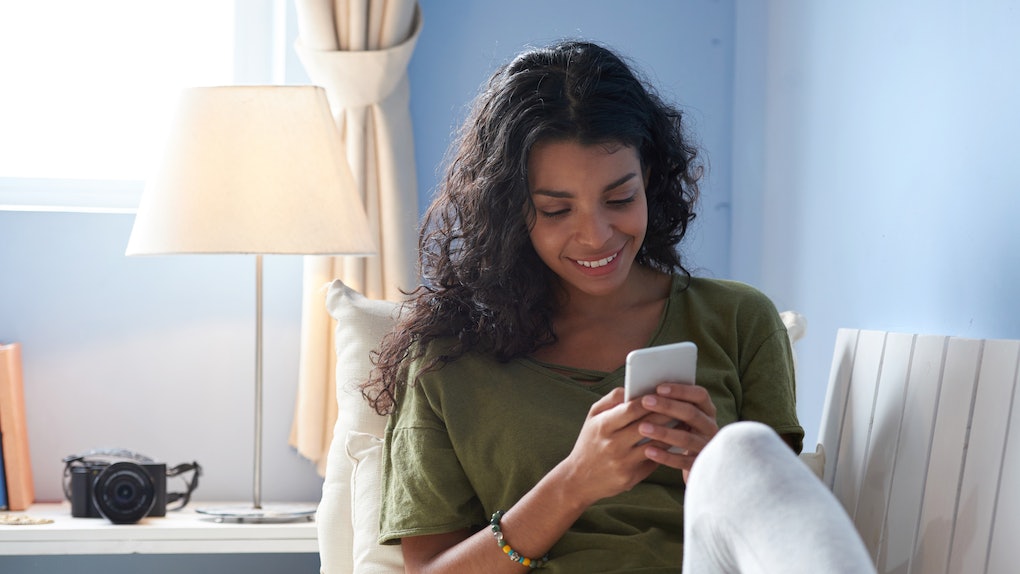 7 Opening Lines To Use On Facebook Dating, So Go Shoot Your Shot

Since 2004, Facebook has provided a way to connect with friends both old and new. And since Sept. 5, Facebook Dating has provided a way to make new matches and confess crushes to old friends. But here's the thing: On this app, whether you're sending a message to a new match or a mutually felt crush, you only get one chance to shoot your shot. And you can't send a general message — instead, you have to reply to an element of a person's profile, like a photo or a prompt. What are the best opening lines to use on Facebook Dating? The best approach is always something tailored to that person so they know you've done your research.

Unlike hats, your first Facebook Dating message can't be a one-size-fits-all situation. Users can include up to nine photos in their profile, as well as ice-breaker questions provided by Facebook, like, “What does the perfect day look like?” So rather than sending a new match an uninspiring "What's up?", your first message should respond directly to one of those nine photos or questions, just like on Hinge. If you're looking to get a response from your new match (which is, obviously, the objective), try one of these opening lines.

Was This Pic Taken In Dublin? I Went There Last Summer.

It's tempting to compliment your match's physical appearance ("Someone certainly doesn't skip leg day!"), but try opening with a message that responds to a photo location rather than a match's looks. If any of their photos feature them at a particularly cool-looking amusement park, or on a farm, or in a different country, ask them about it. Bonus points if you recognize the photo spot and have been there yourself.

I See That You're A Patriots Fan. I'm A Jets Fan Myself, So We May Have A Problem.

Nothing gets a convo going like healthy rivalry. If you see that your match is wearing a hat or shirt supporting a certain team (or maybe even a photo of themselves attending a game), go ahead and comment on it. Perhaps their team of choice is your favorite team's rival. Maybe you two even root for the same team. Any common interest, like sports, is a great place to get started.

It Looks Like You're A Golfer. Have You Ever Gotten A Hole In One?

Look for any activities featured in your match's photos. If you see a picture of them bowling or boating or hitting up batting cages, it's definitely fair game to ask them about it. You can express a shared interest in the activity or, if it's something you've never done before, ask them how long they've been doing it themselves. Either way, it might just give you two a perfect first date idea.

A Fellow Sushi Lover! Where's Your Favorite Place To Go?

One of your match's pics may include food or drinks (especially if they're a foodie), and you might just discover a shared love of a certain type of cuisine. Ask about where they like to go or what they typically order, and when you ask them on a date, you'll know exactly where to take them for dinner.

Is That Your Dog? What's His Name?

Another common photo that you'll see on a person's dating profile: pics with pets. It's just a fact that pet photos get you more matches, and if your new match is posed next to a particularly cute animal, let them know if you're a fellow lover of all things fuzzy. Even if you don't have a pet yourself, asking about their pet's name, age, or breed basically guarantees a response.

My Cousin Also Went To Duke. What Year Did You Graduate?

If your match went to college, then chances are that they're going to be showing off some school pride in their pics. If you recognize the name of the university on your match's shirt or even know someone who also attended that school, ask them about their experience. Many people love talking about their alma mater, and if it gives you a chance to discover a mutual acquaintance, then it's a win-win.

You Certainly Seem To Travel A Lot! Where Is The Coolest Place That You've Ever Gone?

Travel is something that almost everyone can talk about, whether they're an international traveler or have been going to the same camping spot with their family every summer for years. If their profile features several vacation pics, ask about where they've been or where they'd like to go. It's easy to segue from there into places you both have been or any upcoming trips either of you might have planned.

The photos included on a person's dating profile aren't just an opportunity to check out how cute your new match is — they're also the perfect inspo for conversation starters. Facebook Dating is all about authentic connections, so use their photos to find something you two have in common. You'll be amazed to see where a solid opening line can take you.

More like this
20 Tweets About Raya That Show Just How Exclusive It Really Is
By Corinne Sullivan
24 Responses For Hinge's "A Shower Thought I Recently Had" Prompt
By Lydia Wang
23 Lines To Use When Sliding Into DMs, Because It’s An Art
By Caroline Colvin
Stay up to date