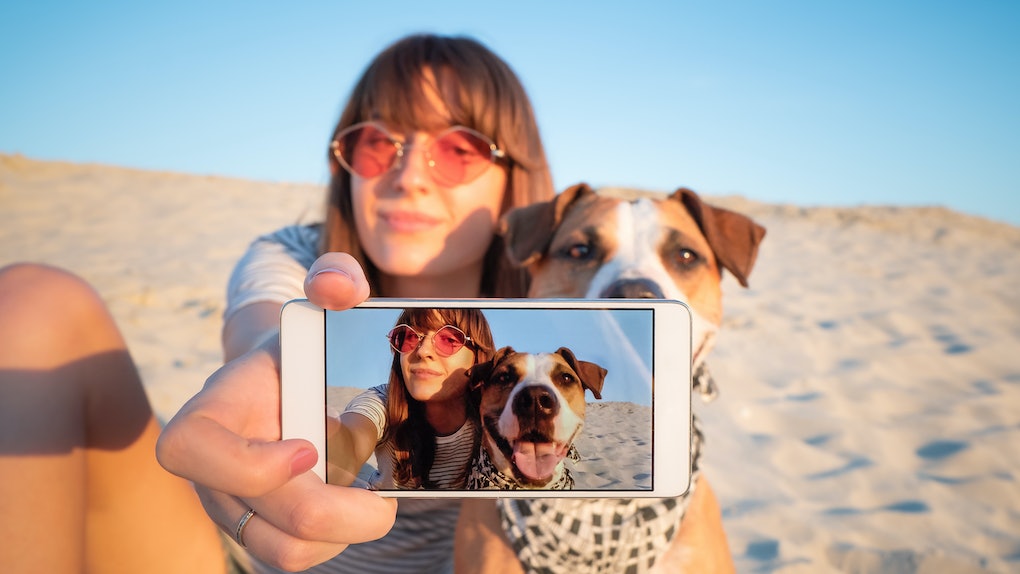 Do Dog Photos Get You More Dating App Matches? Here’s The Verdict

When I had Tinder, my bio was three words long: "Must love dogs." Does anyone else know that 2005 rom-com with Diane Lane and John Cusack? I can't be the only one who loves that movie. I'm not sure how many of my matches actually got the reference, but I definitely got plenty of fellow dog lovers. Despite not actually having any photos of pups myself in my profile, my matches almost always started convos about dogs, and I swiped right on dog pics in return. I've always been a believer that dog photos get you more dating app matches, but as it turns out, it might actually be the truth.

I spoke to Michael Kaye, Global Communications Manager at OkCupid, and according to him, including pictures of dogs in your dating app profile is proven to make it stronger. "We actually have millions of dog mentions in OkCupid profiles," Kaye says. "Users with dog mentions have a higher probability of initial conversation over those with cat mentions. They also have a higher reply rate." Take that, cat people. (Sorry, I'm biased.) And he's not just saying that — he shared some pretty compelling evidence with me to back up his claim.

OkCupid has found that — while men and women disagree on plenty of topics — a love of dogs is something most people can see eye-to-eye on. "We found that 81% of men and 80% of women on OkCupid like dogs," Kaye explains. "Additionally, 84% of women and 80% of men either own a dog or would love to." But here's where it gets really interesting: According to Kaye, there has been a 422% increase in dog mentions on OkCupid profiles since 2017. Apparently, people are realizing that mutts equal matches and are jumping on the bandwagon.

I also spoke to a Tinder spokesperson, and they agreed that dating app users are down with doggos. "Users typically respond to photos that include animals or traveling shots," they said, adding that about 10% of both men and women include dogs in their photos. So basically, if you include a pic of you and your golden retriever, you're golden.

But that's not all. UK-based pet food company Webbox carried out a two-week social experiment called Pet Wingman, where they attempted to find out whether including your dog in your Tinder or Bumble profile increased your chances of finding a match, and the results were conclusive. On average, women saw an increase of 69% more matches when they included a dog in one or more of their pictures, while men saw an increase of 38% more matches.

Bumble didn't provide quite as much success for female dog lovers (no doubt because men aren't given the option to initiate conversations on this dating app), but dog pics provided just as much success on Bumble as they did on Tinder for male users. For Bumble, women received 22% more matches, 100% more super likes, and 30% more total interactions. Men on Bumble received 45% more matches, 40% more messages, and 39% more total interactions.

Bumble is such a big fan of dog lovers that the app offers tools to make it easier to dog lovers to find one another. "Bumble users often include photos of their pets on their profiles, but they can also use Bumble filters and badges to specially match with people that are also dog lovers," a spokesperson for Bumble told me. "In fact, our data shows that our pet badge is one of the most popular badges alongside our star sign badge."

Bottom line: Dogs paws-itively make your dating app profile stronger. Of course, I'm not suggesting that you borrow a dog for a photoshoot, especially if you're really more of a cat person or a weirdo reptile person. I'm just saying that, if you don't like dogs, you're wrong. OK, you're not wrong, but it definitely seems as though you're in the minority here.