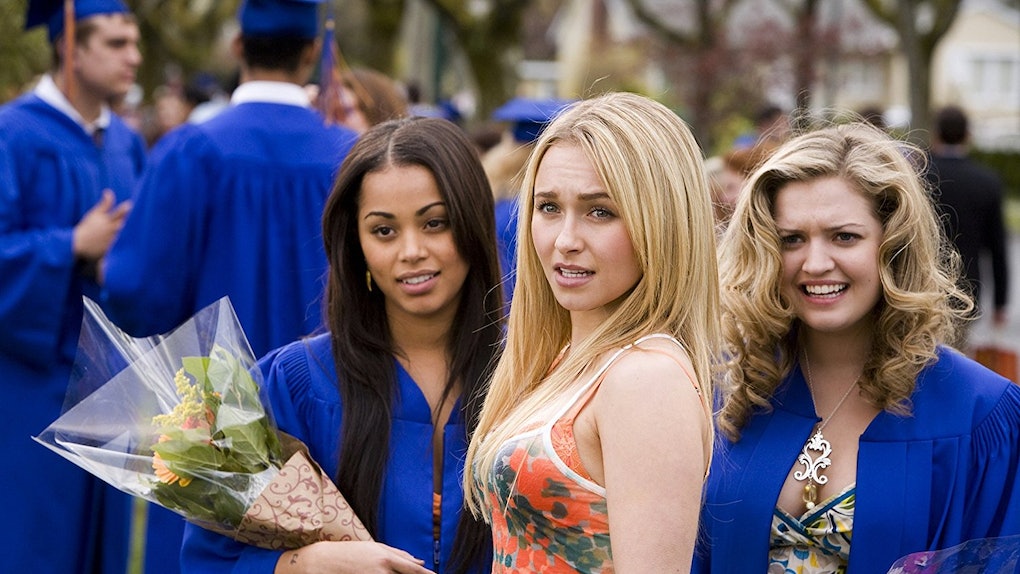 7 Movies About Graduation To Prepare Yourself For The Cry-Fest

There is no moment as bittersweet at graduation. Getting older and moving to the next stage of life is amazing, but at the same time, it's so hard to leave your best friends and the safety net of school. The real world is tough, I get it. To help you prepare for the inevitable cry-fest (because no matter how you feel about graduating, there will be some tears), why not watch some of the world's most iconic movies about graduation? Sure, these movies may make you cry even more, but once all is said and done, it will feel a little cathartic. Plus, it's not like you have anything else to do now that classes are officially over.

If you're trying to get your graduation binge-watch in before the real world hits, you're in luck. Graduation is basically an Oscar-ready topic: Filmmakers have been making movies about characters coming-of-age (and then winning major awards) for decades. Some of these movies are about college and some are about high school graduation, but I guarantee you that every single one of them will give you all the feels about walking across that stage. Or at the very least, these seven movies will give you something to watch while you're decorating your graduation cap.

It's humanly impossible to not mention Legally Blonde when talking about graduation movies. Legally Blonde features not one, but two graduations: Elle Woods' (Reese Witherspoon) college and law school graduations. Sure, Elle probably doesn't go to law school for the right reasons (following d*ck weed Warner instead of actually wanting to be a lawyer), but by the end, she realizes that she was born to expose people's fashion-related lies in a court of law. Legally Blonde isn't the most emotional of all graduation movies, but if you don't tear up at least a little when she gives that Harvard Law graduation speech, then you can take your pink, scented paper elsewhere.

As Stefon would say, Adventureland has everything: a pre-Social Network Jesse Eisenberg, a dilapidated amusement park, and angsty Kristin Stewart. Eisenberg stars as James, a college grad who gets a summer job at a run down amusement park to pay for grad school. At Adventureland he meets Em (Stewart), his loose cannon co-worker, and the two quickly become friends. Part love story, part what-the-hell-do-I-do-after-college story, Adventureland is the perfect movie to watch when you feel like everyone except for you has their sh*t together.

Name a more iconic high school graduation film. I'll wait. If you haven't seen 10 Things I Hate About You, stop what you're doing and watch is ASAP. The movie follows two totally different sisters (Julia Stiles and Larisa Oleynik) as they navigate the difficult waters of high school and begin dating equally different guys (Heath Ledger and Joseph Gordon-Levitt). Older sister Kat is desperate to get away and go to Sarah Lawrence College, but her dad refuses, creating some serious tension as senior prom and graduation approaches. 10 Things I Hate About You is an adaptation of Shakespeare's The Taming of the Shrew, so you can totally justify watching it for the hundredth time by saying that it has "educational value."

If 10 Things I Hate About You is a must-see high school graduation film, The Graduate is the first movie in the college graduation canon. The 1967 film follows Benjamin Braddock (Dustin Hoffman) as he attempts to figure out his life after graduation. Benjamin can't really articulate his goals, so he just loafs around his parent's house aimlessly as they talk around him (sound familiar?). Later, he's seduced by Mrs. Robinson, an older woman, and falls in love with her daughter Elaine, creating a big problem for the otherwise-purposeless Benjamin. Despite the name, The Graduate isn't about graduation, per se, but it's an Oscar-winning coming-of-age story that definitely deserves two hours of your time.

Let's lighten things up a bit. Remember Britney Spears' 2002 movie Crossroads? It's actually a great graduation movie that will remind you just how important your friends are. Spears stars as Lucy, an 18-year-old who digs up an old wish box with her friends Mimi (Taryn Manning) and Kit (Zoe Saldana) on graduation night. The three friends realize that the best way to achieve those wishes is to set out on a cross-country road trip, where they each learn a little about themselves and their friendship along the way. Crossroads is by no means the best movie ever, but it will give you serious feels about what it's like to separate from the people you've relied on for so many years.

Chances are you're not going to cut up your credit cards and head into the wilderness after graduation, but if you are, Into The Wild is the movie for you (and even if you aren't planning on doing that, you'll like it). Emile Hirsch stars as Christopher McCandless, an Emory graduate who rejects his conventional life and goes west to commune with nature. He ends up in Alaska, where he fights to survive in the rough wilderness. Into The Wild is based on the true story of McCandless, and while his reaction to graduation may seem a little extreme, going off the grid for a little while you figure stuff out actually sounds kind of nice. Sometimes you just need some alone time to get your post-grad plans in order.

The 2009 movie I Love You, Beth Cooper premiered right in the middle of Hayden Panettiere's glory days. During his high school graduation speech, valedictorian Denis (Paul Rust) professes his love to head cheerleader Beth Cooper (Panettiere), and even though Beth is floored that the geeky Denis likes her, she and her popular friends show up to his house for a party that night. The entire movie takes place on the night of graduation, and as the night progresses, Beth realizes that Denis is actually a great guy who deserves her attention. I Love You, Beth Cooper is a pretty classic teenage rom-com, but the hilarious jokes and great cast make it much better than your average teen movie. Plus, if you're giving a graduation speech, I Love You, Beth Cooper will make you feel totally confident that yours can't possibly be worse than Denis'.