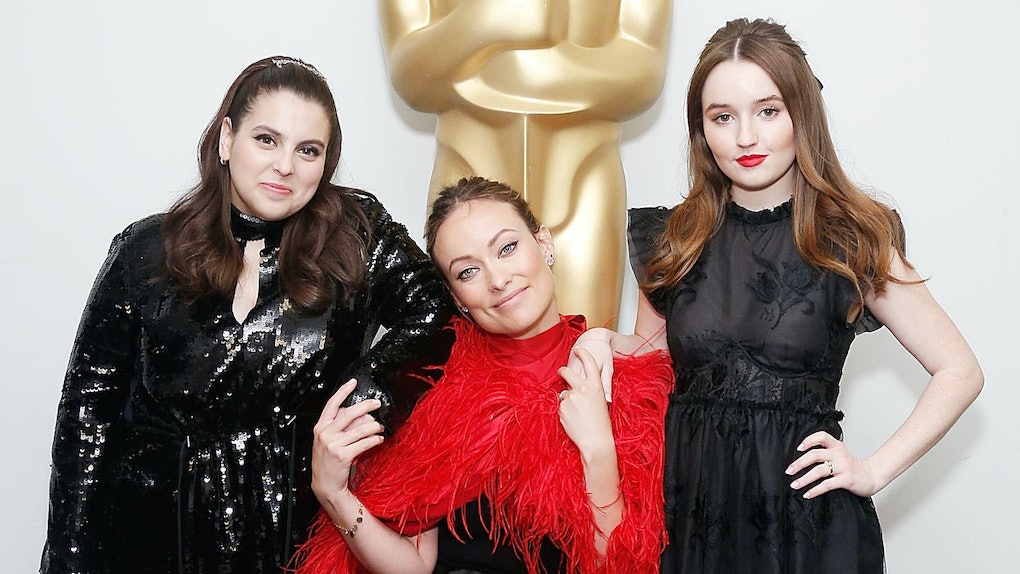 Olivia Wilde's Booksmart was a damn delight. The coming-of-age film, starring Beanie Feldstein and Kaitlyn Dever as two "nerdy" high school seniors, took the high school comedy genre and flipped it on its head with a female, queer-centric narrative. Although there are romantic plot lines for Feldstein and Dever's characters, Molly and Amy, the real love story of the film is the characters' friendship. Olivia Wilde's quotes about female friendship in Booksmart make clear Wilde's main intention for her directorial debut film was to show that genuine, unapologetic friendship should be the true love of one's life.

Wilde tells Elite Daily she grew up loving movies about the struggles of high school (she notes The Breakfast Club, Ferris Bueller's Day Off, and Clueless as some of her favorites), so she felt it was only right to start her directing career with her own addition to that category — but with a timely, Gen-Z twist.

"In this time, responding to where we are in the world, it feels like what we should be focusing on is really human connectivity and empathy," Wilde says. "That starts at a young age. There’s something about returning to adolescence to help us understand how to be better adults."

Feldstein's casting in the film felt apt, considering her older brother, Jonah Hill, rose to fame in Superbad — a high school comedy millennials grew up loving. Booksmart (which is now available on DVD and Blu-Ray and for digital download) sets itself apart from the mold in a variety of ways, however.

For starters, Amy is a lesbian. Film and TV have come a long way when it comes to authentic portrayals of LGBT characters like the ones in Pose and Orange Is The New Black, but it's unfortunately still rare to see a queer main character in film where their queerness isn't the main focus of their storyline.

"[Booksmart] felt like an opportunity to accurately reflect what I was seeing around me in the world. Particularly with this younger generation, who has demanded a different paradigm," she says. "They want different labels, or no labels! They want to participate in politics in a different way. They’re demanding a different system, and they’re leading by example in terms of their sexual orientation, in terms of their gender, in terms of their political affiliation. Every single way of living their life is a statement that is collectively shifting the course of history."

With Booksmart, Wilde wanted to show people with different sexual orientations can be best friends, which is obvious to me and lots of other members of the LGBT community, but it's not something that I've ever accurately seen in films. (The gay best friend trope does not count for obvious reasons.)

"Molly’s into dudes, Amy’s into women, but it’s not an issue for them, and it doesn’t create any sort of impediment between them or awkwardness," Wilde says. "[It's] not unusual, and it doesn’t need to be the focus of a film."

The best part of the film, by far, is whenever Molly and Amy had compliment battles with each other. Think of it as the Gen-Z version of Leslie Knope showering Ann Perkins in praise.

Wilde says she pulled from her own female friendships when creating this dynamic between the leading ladies, saying it was vital to her to show adolescent female viewers what real support between women looks like. It's genuine, it's loving, it's unapologetic.

"A good friend reminds you of your brilliance," Wilde shares — and ain't that the truth! "[Best friends] act as a mirror to remind you when you lose sight of yourself. They remind you of who you truly are. That’s something I wanted to represent so that the message we were saying with the film was friendship is not only about loyalty."

Loyalty is usually seen as an absolute necessity in friendships, but Wilde's outlook on it may change your mind. "Loyalty can actually lead to a lot of pain," Wilde says. "It can become less supportive and more intense in a way that’s not as helpful. So I thought, let’s talk about loyalty as it relates to true support."

That principle played into Amy and Molly's now-iconic movie friendship.

For Molly and Amy, true support means unconditional, judgment-free love, helping bolster each other's confidence when needed, and dropping everything when the other needs help. (They incite activist Malala Yousafzai in their "Malala Pact," which requires both of them to drop whatever it is they're doing to help the other by whatever means necessary. They can only use "Malala" once a year.)

And it wasn't just a message of female support Wilde wanted to convey in Booksmart. She wanted to counter all of the teen romance movies with a story of true love between best friends, and how that is, for many people, the truest, most supportive love a person can experience.

"Society provides all of the context for romance," she explains. "It prioritizes romance, and it seems to diminish your friendships as something sort of transient and replaceable. And yet, a real friendship is the most essential and glorifying experience. I wanted to really send that message in the story."

More like this
Lana Condor's Career Goals Are All About Representation — EXCLUSIVE
By Rachel Varina
These Songs About Friendship Between Women Are Empowering AF
By Sydney N. Sweeney
These Throwback Jennifer Lopez Movies Are Such A Blast From The Past
By Ani Bundel
Stay up to date