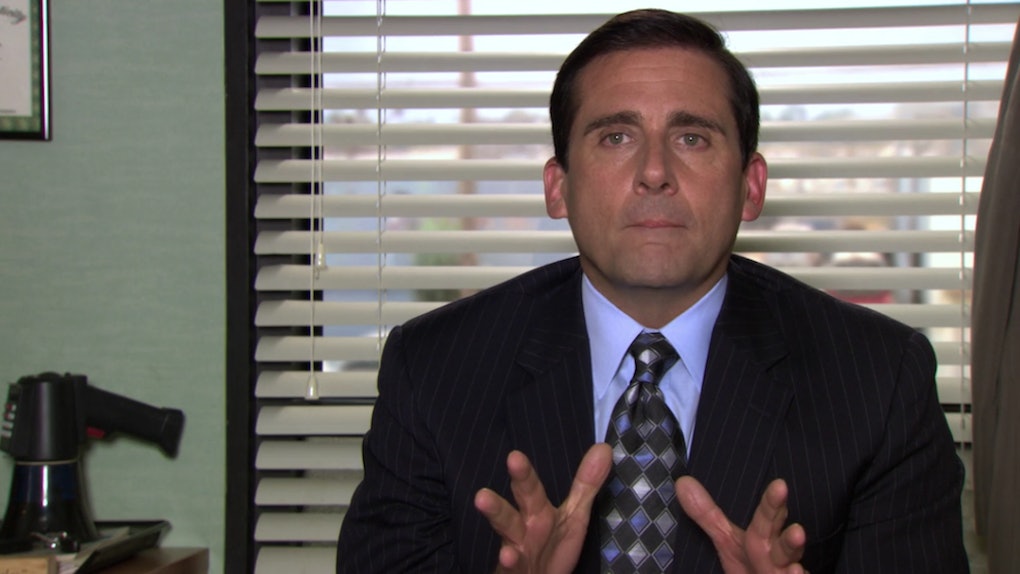 Struggling through the work week? Same, girl. Sometimes a couple of cups of coffee just don't make the cut. You're just looking forward to it being five, when you can pack up your stuff and start snuggling up on the couch. Naturally, you'll turn on The Office, even though you've seen every episode. You just can't get enough of Michael Scott, and I totally understand why. He's the world's best boss, and one of the most relatable sitcom characters out there. The best Michael Scott moments from The Office make us all say "same," and we wish we could be a part of the Dunder Mifflin family.

From every "that's what she said" line, to all of the meetings that started in costume, and the moments of hardcore parkour in between — Michael Scott is truly something else. Selling paper can't be everybody's passion. Just ask Jim how he feels about it! We'd probably be spending our days pulling pranks and hanging out with Pam, too. But, Michael surely has a way of keeping things interesting, way past the water cooler and right down to the warehouse.

Truth be told, he probably deserves all the Dundies, but then who would be host? I'm sure Dwight would love to step up, especially if it meant he got to be manager for even just a minute. Scranton wasn't the same when Michael left, but these moments remind us why we'll always be able to relate to The Office.

1. When He Declared Bankruptcy

Being 20-something means that you're almost always balling on a budget. When you land your first job and hit the real world, it's not quite as bad. But, then other bills hit like car payments, student loans, and rent and you wonder if going off the grid is still an option. According to Creed, this is the greatest gift life could ever give you. The ramen and nuggets you had for dinner last night sort of say otherwise, though.

Michael Scott declaring bankruptcy is all of us when our friends want to drop a lot of money on a weekend trip in the city, or we just don't have the funds. We start picking up odd side jobs and go through old stuff that we can sell. Declaring it makes it better, right?

2. When He Finally Finished His Movie

The most anticipated film in movie industry (and Dunder Mifflin) history is Michael Scott's Threat Level Midnight. Thank goodness there was an entire episode dedicated to this, because it finally got the love and attention it deserved. All of that time shooting and editing really paid off. Although, Jim, I don't think it did much to impress Pam.

This moment is all of us when we're following our wildest dreams. Some people might think we're crazy, or not see why the finished product is actually so amazing (*Cough. Holly. Cough.*) — but, we're proud of what we've done just the same. The best part is we always have our friends, family, and work crew there showing some support. And of course, starring in the most major scenes.

3. When He Gets Really Into Secret Santa

The holiday office party is the main event for any party planning committee. First, you have to pick out a theme. Maybe you'll stick to the ordinary and just pick out a live Christmas tree to impress all of your special guests. As long as there's Secret Santa and some cookies for Kevin, it'll all be OK.

Michael Scott getting really into the gift exchange is what all of us wish we could say come Christmastime. He tells it like it is from the intro, reminding us that presents are objects that convert love into dollar amounts. It's no wonder he got Ryan that expensive iPod. When you love someone that much, you really don't have the Secret Santa rules or a budget in mind.

4. When He Called Wendy's

Michael calling up Wendy's is all of us when we realize that French fries are truly our soulmates. After asking everyone in the office to come up with someone he could ask out, Kevin suggests a girl named Wendy who is a "hot and juicy redhead." Within minutes, Michael is placing a takeout order instead of landing a date. Honestly, it might be the best and realest mistake that Kevin has ever made.

Some of the most awkward dating scenes in sitcoms have had us seriously wondering if we'd rather side with cat-lady Angela or propose to a six-piece instead. Then we realize we don't want to sign off on love forever, but that Wendy might make a great friend for while we're waiting out that dreamy relationship with our own personal Holly.

5. When He Gets Everyone To Take A Group Photo

Michael, we know how difficult it can be to get everyone down for a group photo. Seriously, on a Saturday night when everyone has their mind elsewhere, rounding everyone up for the most ideal Instagram is a struggle. Naturally, you want to take a few pictures so that you have some options when it comes to posting. But, not everyone is so patient to stand there and help create your visions. So, you have to settle with some not-so-bright smiles and hope that nobody really reads that newsletter.

The dream would be to have a personal photographer who would follow us all around and capture our most candid moments. Sure, we don't need to document Jim and Pam's first fight for forever — that would just be sad to see constantly. But, we'd love to have a photo of the whole bunch — maybe minus Toby.

6. Whenever He Mixes Up His Words

Words are hard. Michael mixes up the pronunciation and grammar of a lot of common phrases and words throughout his time on the show, but the debate over "whomever" might be the most extensive.

There was the time the "turn tables" and when Michael needed someone to call him "ASAP as possible." We forgive him, though, because it's easy to understand that sometimes you just start a sentence in hopes that you figure out where it's going along the way.

In this scene, the whole office gets involved, and Pam seems to be the only one who really knows the English language. Who needs to work when there are debates like this causing an office debacle? I'm sure corporate will understand.

7. When He Got Emotional At The Last Dundies

Full disclosure: I rarely cry at television shows, especially sitcoms. This scene, though, had me more emotional than ever. And I think it's safe to say that when Michael Scott started tearing up, we were all saying "same." You might have a lot of mixed feelings about the last two seasons of the show. But, this moment will always hit home and remind you of all your feels for your friends over at The Office.

Truth is, we love our work crew because they get us through the week and really do become family. They know about all of our struggles, and what we order from Starbucks. Sure, not every office is like the one in Scranton, and you'll likely run into the world's worst boss while you're following your career path, too.

Michael Scott definitely set the standards high, and The Office remains incredibly relatable because of his best moments.