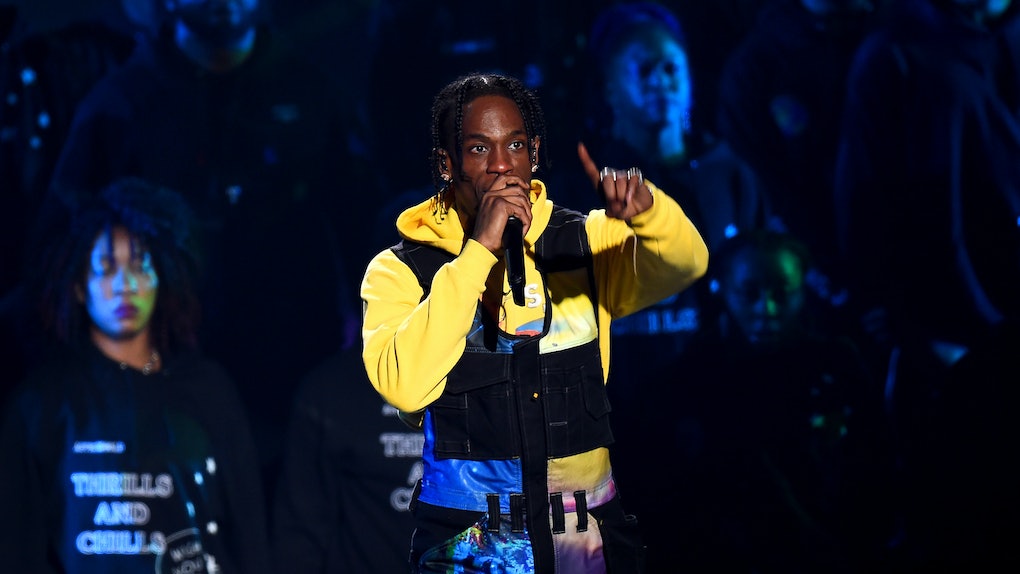 Travis Scott's fame has shot up so high and so fast that he's already making his first Super Bowl appearance. One could say his success has become ASTROnomical... OK, bye. Maroon 5 snagged the coveted Super Bowl Halftime Show for this year, but it's been confirmed that the rapper will be making an appearance during the group's halftime show on Feb. 3. Knowing Instagram will be flooded with that #SuperBowlContent, we've rounded up six Travis Scott lyrics for your Super Bowl Instagram captions that will keep you in "Sicko Mode" throughout the game.

Scott has gotten some flack for agreeing to perform during the Super Bowl Halftime Show this year. Rihanna, P!nk, Cardi B, and JAY-Z all turned down offers to make appearances given the controversy surrounding the NFL's treatment of Colin Kaepernick. Rapper Meek Mill even tweeted about his disagreement with Scott's decision to perform in the show, saying that his career is strong enough as it is — he doesn't need the Super Bowl to elevate his work.

Regardless of the flack, Scott is still performing with Maroon 5. They don't have any songs together, but it's a frequent thing for the main artist of the Super Bowl show to bring on other artists as a highlight of the night. Aerosmith performed with *NSYNC, Britney Spears, Mary J. Blige, and Nelly at the Super Bowl in 2001, Coldplay brought on Beyoncé and Bruno Mars in 2016, and Katy Perry brought on Missy Elliott in 2015.

It's a staple move when it comes to Super Bowl performances, so it shouldn't be shocking that Maroon 5 is bringing on other artists as well. Fans have theories that in addition to Scott, Maroon 5 might bring out Mick Jagger (thanks to their song "Moves Like Jagger"). Fans also think it's possible that Scott will bring Drake out to perform their collaboration together, "SICKO MODE."

Regardless of whether he brings Drake out for "SICKO MODE," you can bet he'll probably perform it during the Super Bowl given it's been on the Billboard Top 10 basically every week since it dropped this summer. So here are all of the Travis Scott ASTROWORLD lyrics to make all of your Instagram caption brainstorming a breeze while the New England Patriots take on the Los Angeles Rams:

For when people are doing the most at your Super Bowl party.

For when you've been sitting down watching the game for hours and realize how drunk you are when you stand up. Happens to the best of us.

For all of those Tom Brady haters out there.

4. Jump inside, jump straight to the league" — "BUTTERFLY EFFECT"

I feel like this one just sounded very #sportsball.

5. "Count up a hun', cop a Rolex. Shine like the sun, you truly blessed. Two-tone Pateks. In the Clearport like I Uber these jets" — "YOSEMITE"

For those inevitable celebration photos you snap outside in the freezing cold (west-coasters can't relate, I know).

So much sportsball to celebrate this weekend, y'all. My game day was when Rent: Live went down on Jan. 27, but I hope y'all have a fun time watching the halftime show!!