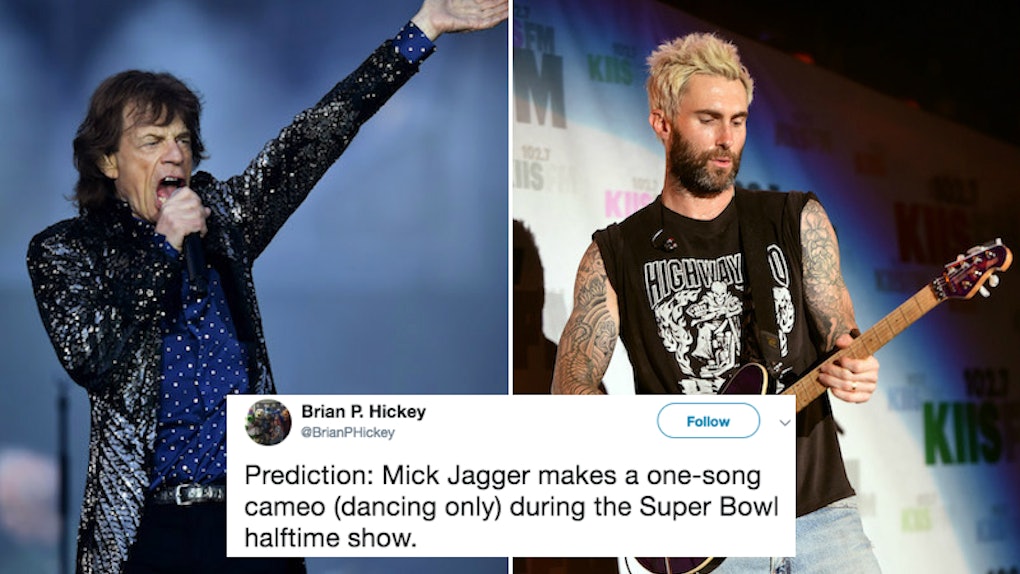 Will Mick Jagger Perform At The 2019 Super Bowl? Maroon 5 Could Perform "Moves Like Jagger"

America is feverishly stocking up on Bud Light and hard seltzer in preparation for the 2019 Super Bowl. This year, the New England Patriots take on the Los Angeles Rams, and while sports fans might be busy painting their faces, music fans are carefully monitoring Twitter. That's because ever since it was confirmed Maroon 5 would be playing the Halftime Show, people are now wondering, "Hey, will Mick Jagger perform at the 2019 Super Bowl, too?" Obviously, this question began circulating thanks to Maroon 5's hit number "Moves Like Jagger," which is aptly named after the iconic Rolling Stone.

According to Sporting News, Maroon 5 wasn't the Super Bowl's original choice. Reportedly, both Rihanna and Cardi B (who is featured in Maroon 5's hit "Girls Like You") turned down the offer in solidarity with former 49ers quarterback Colin Kaepernick. While we know Cardi B won't be popping up on stage to join Adam Levine, fans are crossing their fingers for a Jagger cameo.

Maroon 5 debuted "Moves Like Jagger" nearly a decade ago in 2010 when it quickly skyrocketed to the top of charts. Whether you hate to love or love to hate it, you have to admit — that's one catchy chorus. Powerhouse Christina Aguilera is also famously featured on the track, though it has yet to be confirmed if she, too, will be showing face on Feb. 3.

Fans are speculating/hoping/praying that Jagger will appear on the Super Bowl halftime stage a whole 13 years after he and the Rolling Stones' own Super Bowl performance in 2006.

Jagger, if you're listening, the people love you (and are expecting you). In fact, some disgruntled fans are even suggesting he might be the only thing that can "save" Maroon 5.

There's a lot of feelings there, right?

While Jagger is still a hard maybe, Travis Scott and Big Boi have officially signed on for the big show. Additionally, Gladys Knight will be singing the national anthem before kick off.

One reason Jagger may not be up for the performance is that he wouldn't get paid. (For real. I know.) In 2016, NFL spokesperson Joanna Hunter told Forbes magazine all production costs and expenses are covered for the Halftime Show, but that the performers themselves do not take home a paycheck. Rather, the show is intended to work as extreme PR for any upcoming albums or tours, etc. etc. According to reports, after Bruno Mars performed in 2014, his album Unorthodox Jukebox went from number seven to number three on Billboard 200. The year before that, Beyoncé's sales went up 59 percent after her halftime show.

All of this to say, Jagger simply might not need the press right now and therefore doesn't have the motivation or desire to perform. The only way to know for sure is to tune in Sunday, Feb. 3.

More like this
Here's Why EXO's BAEKHYUN, CHANGMO, & Raiden's "Runner" Is The Perfect T1 Theme Song – EXCLUSIVE
By Michele Mendez
Prince Philip, The Duke of Edinburgh, Has Died At The Age Of 99
By Noelle Devoe
I Tried Singing While Running Like Miley Cyrus & OMG, My Lungs
By Rachel Varina
Stay up to date