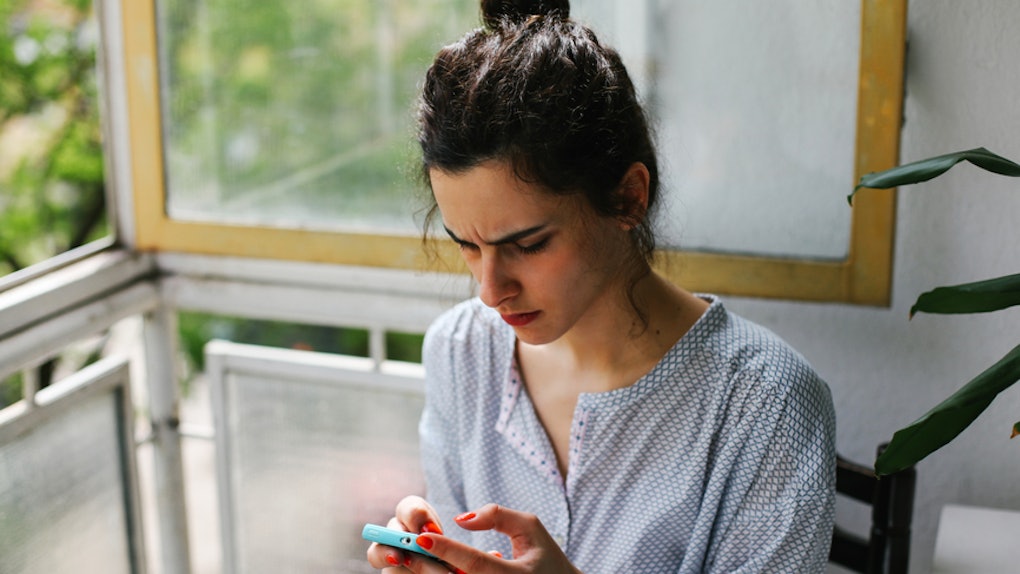 6 Signs They're Mad Through Text, As Told By The Experts

Have you ever been texting with your partner, and in your gut, you just knew something was off? They weren't saying they were upset, but you just sensed there was a problem. Maybe you can't quite put your finger on it, or maybe they deny it, but, still, you just can't shake it. So you start to wonder if you're just being paranoid. Yep, I've definitely been there too and usually (annoyingly), it would eventually come out that, yes, they were angry. But if they aren't going to own up to it, what are the signs they're mad through text that you can recognize right away?

Even with the liberal use of emojis, so much can still manage to be lost in translation over text. It's ridiculously easy to misinterpret messages, or to miss the subtle cues your partner is sending (or trying not to send). Rather than go further down that spiral, I called in the experts. I turned to bestselling author and relationship expert Susan Winter and senior matchmaker and dating coach Lori Salkin of SawYouAtSinai.com to help me puzzle through the texting behaviors that you need to keep an eye out for that will let you know that your partner is upset.

Winter says that if your partner is typically really good about getting back to you in a timely fashion, but has suddenly started to take a longer time to reply, it’s a sign that something is wrong. Especially if that lag time has grown to the point where you’re left wondering. “That's the point,” says Winter. “It's a cue for you to notice they're upset.”

Salkin says a drastic change in the pace of your communication could be a sign that your partner is actually pushing away and “putting a lot of space between the two of you, whereas previously you were also connected and in communication.”

Bottom line, if the rate at which you communicate changes noticeably and nothing in particular has changed in their life (like a big test, or a project at work), then it’s a red flag that something is amiss in the relationship and you need to get some face time to discuss what’s really going on.

2. They Ditch The Emojis

Emojis are a totally underrated form of communication. Yes, they are cute and funny and shorthand for your mood. (Does anyone else worry if they don’t include a smiley face with every correspondence now, they seem rude? Just me? Anyway… ) But in this case, it’s not as simple as their emoji game going from smileys to frowns. As Salkin explains, it’s about changes in emoji use that let you know if your partner is mad.

If they are typically emoji senders but now those smileys and eggplants have dried up, Salkin says “he or she’s clearly upset or frustrated, and it’s an intentional move that they want you to pick up on and realize that something’s off."

3. Their Texts Get Noticeably Shorter

We don’t always have time to send each other text novels, but Winter warns that if your normally chatty partner who loves to share all the deets of their day seems to have disappeared, pay attention because something is likely off:

If their response is uncharacteristically brief. One-liners like 'yes,' 'no,' or 'don't know yet' sound clearly obligatory. This is a subtle indication that says, ‘I’m mad.’ Basically, if you’re trying to get a read on where your partner’s head is at, what you want to be looking for is deviations from their ‘normal.’

4. You Get The Dreaded “Can We Talk Later” Text

The reason that this one is scary is because it’s easy to fire off a quick reply if you’ve got nothing serious to address. However, Salkin says if you get a text along the lines of, “Hi, you know I am really busy at work, can we just talk later,” it’s a sign that they have something more serious on their mind. They want to consider what they have to say carefully and discuss it with you. If that’s the case, there is a solid chance that, yeah, they’re mad.

Have your normally casual conversations suddenly started taking on a businesslike tone? Uh oh, girl, you in danger. Speaking formally is how we talk to strangers, not how we talk to partners. Winter says if you start getting text messages that seem like they belong on letterhead, that it’s a sign of separation.

“Formality in language creates distance,” she says. “Normally it's an indicator of respect, but in this case, it's a red flag telling you they've pulled back.” It’s best to get to the bottom of what’s causing them to pull away as fast as possible so that you can address whatever is on their mind.

6. They Stop Asking You Questions

Salkin says to play close attention to this, because if they “used to ask details of how your day is going, tell you his day in the play by play and it’s now it’s just ‘OK,’ ‘thanks,’ or ‘got it,’ it means something is off. They are likely upset about something and you need to backtrack and figure out what it is and talk to them about it as soon as possible. You don’t want to let things fester and grow."

The key here is to recognize the signs your partner is mad as soon as possible. Then, when you do have the conversation to resolve whatever is going on, you also want to start laying the foundation for more open communication. That way, you aren’t having to solve the texting equivalent of The DaVinci Code every time they feel some kind of way about something you’ve said or done.