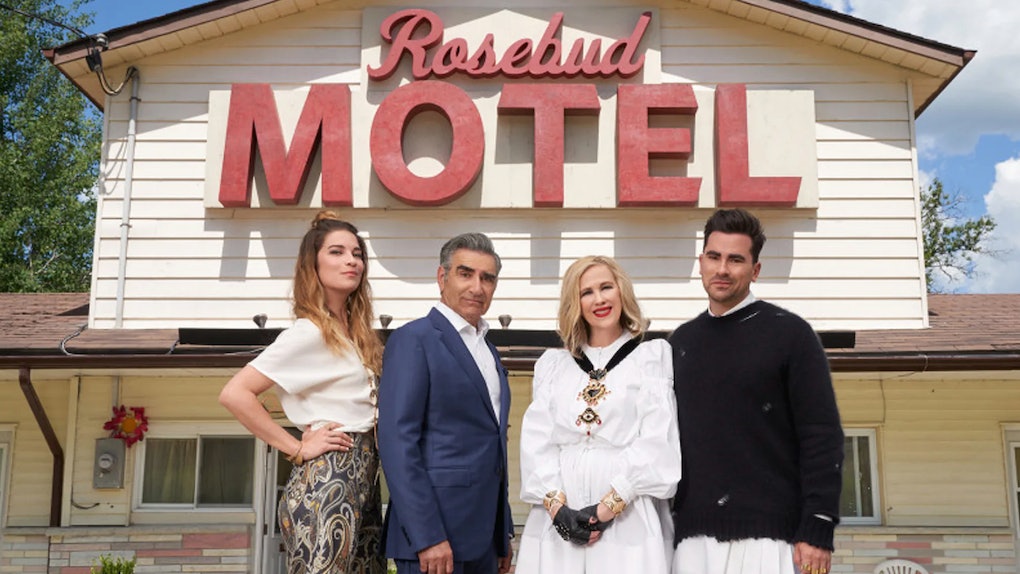 6 ‘Schitt’s Creek' Spinoff Ideas That Are Simply The Best

Chances are, when you first started watching Schitt's Creek, you weren't prepared for how much you'd grow to adore the series. But for six seasons, the Roses warmed viewers' hearts and tickled their funny bones with their quirky humor, unique story, and unwavering love for each other. While the series might have come to an end, these Schitt’s Creek spinoff ideas would be the perfect way to keep the magic alive.

The series finale might have aired back in April 2020, but fans are still enamored with Johnny (Eugene Levy), Moira (Catherine O'Hara), David (Daniel Levy), and Alexis (Annie Murphy). The final episode saw Johnny and Moria headed off to California for Moira to pursue the acting role of a lifetime, while Johnny was poised to set up headquarters for Rosebud Motel Group. David and Patrick tied the knot and decided to stay in Schitt's Creek, while Alexis headed off to New York City, solo and ambitious.

While all the characters seem to be on the road to accomplishing their dreams, that doesn't mean fans were ready to see their journeys come to a close. Until there's any further news about a reboot or movie, here are a few spinoff ideas the producers would be silly not to jump on:

1. The Roses Gets A 'Kardashians' Edit

As the family spreads out to follow their individual dreams, it makes sense the format of filming would change. Instead of a sitcom, the Roses' stories would be told like a mock reality show à la The Office. Full of drama, extravagant trips, love triangles, video confessionals, and family strife, the Roses would become the new Kardashians after that famous reality fam takes their final bows.

3. Alexis & Twyla Live Together In NYC

After Alexis's brother flaked on a big move to the city, she realizes she needs a roommate — and fast — to be able to afford her NYC apartment. She reaches out to her bestie from Schitt's Creek, Twyla, who agrees to give city life a try. Together, the two very different women explore the Big Apple, going to fabulous parties, healing broken hearts, and learning how to thrive in a new environment, despite their bond being a little more country than couture.

After David joins the Jazzagals, he quickly decides the group is in need of a major rebrand. This spinoff will follow the group's glow-up as the members balance everyday life with their competitive a cappella dreams. When the group travels the competition circuit, expect to see cameos from a few familiar faces, like Alexis in NYC and Johnny and Moira in California.

After a phone call leads to a Skype call which leads to near-constant video chatting, the exes quickly realized if they come together, they can make their dreams come true. Alexis uses her video marketing talents and vast network to launch a YouTube channel starring a shirtless Ted, who cuddles animals and gives pet owners care tips called The Vet Confessions. The spinoff TV series would be a behind-the-scenes look at the pair's successful channel and would showcase their reemerging romance as they dominate the digital space.

Title: The Vet Confessions: The Making Of

6. Life From The Schitts' Perspective

With a new baby and career, Roland Schitt's life has officially changed. As the next chapter of his journey unfolds, this spinoff will follow him and his wife, Jocelyn, as the couple navigates life with a newborn and Roland runs the Rosebud Motel. Considering Patrick, David, and Stevie still live in Schitt's Creek and Roland works with Johnny, there's plenty of crossover character cameo potential from this new show about the town's founding family.

All six seasons of Schitt's Creek are streaming on Netflix now.