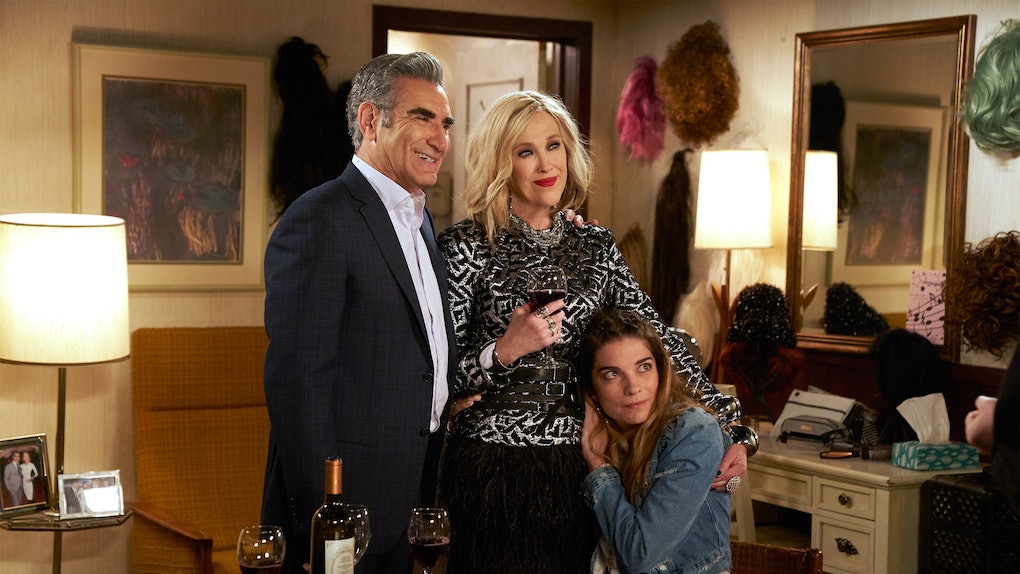 What Happened To The Rose Family After 'Schitt’s Creek'? 6 Theories

If there's one television family fans can't get enough of, it's the Roses. Johnny (Eugene Levy), Moira (Catherine O'Hara), David (Daniel Levy), and Alexis (Annie Murphy) showed the world what it means to love unconditionally, grow even when it's uncomfortable, and laugh through it all. After their six-season reign came to an end, I can't be the only one trying to imagine what happened to the Rose family after Schitt’s Creek. While their story had a sweet conclusion onscreen, that doesn't mean the theorizing has to end...

After a historic Emmys sweep in 2020 and a pretty much perfect series finale, Schitt's Creek continues to add to its vast community of dedicated fans, thanks in large part to its place on Netflix U.S. That means, even though the finale aired back in April 2020, viewers are still coming to terms with the Roses' farewell. While each of the main characters had full arcs and were clearly destined for greatness, their journeys were only just getting started when the series ended. Moira was reprising her famous soap opera role, Johnny's hotel business was booming, David was happily married to Patrick and their general store was thriving, and Alexis was setting off for New York with a sense of professional purpose.

So, while everyone was set up for success, picturing exactly how their futures play out is an undeniably fun pastime for fans. Here's where life may have taken the Roses:

After starring in The Crows Have Eyes 3: The Crowening, Moira received an offer to reprise her longtime role as Vivian Blake for a Sunrise Bay reboot. Considering the original '90s version of the soap included Moira's record for "the longest-running demonic possession on daytime television," the reboot is sure to impress. Add to it the fact that her original co-star Clifton (Victor Garber) isn't returning but Nicole Kidman is joining the cast, it sounds like it'll be a smash hit, just like Schitt's Creek is IRL.

Even though Johnny originally planned to head up Rosebud Motel Group’s headquarters in NYC, he decided instead to join Moira in California. Since he already has a team of investors on board (as well as Stevie and Roland running things back in Schitt's Creek), there's definitely promise for the company. Then, considering his wife's star power is about to skyrocket and his daughter is becoming a PR pro — not to mention Johnny's business acumen — there's a solid chance his company will only become more successful as time goes on.

After successfully opening Rose Apothecary together, David and Patrick proved to be a dynamic business duo. Since their products are being stocked at all of the franchised Rosebud Motels across the nation, odds are their brand will become even more popular. While the flagship store would probably remain in quaint Schitt's Creek, I could see shops opening up in New York, California, and beyond.

4. David & Patrick Have A Baby

First came love, then came marriage. Next, there's a chance a baby carriage might be next for David and Patrick. After getting his wisdom teeth pulled in Season 6, a loopy Patrick told David he wanted to have a baby with him, and while David wasn't exactly a fan of the idea, you never know what could happen in a few years. While the pair agreed they would be totally content as a twosome, if they did decide to have a baby, it'd be a whole event. Jocelyn would be pretty much required to host the shower, since David hosted hers. And maybe Stevie could be their surrogate?

5. Alexis & Ted Get Back Together

One of the most devastating twists in the final season was the breakup between Alexis and Ted. While they were pretty much perfect together, the timing just wasn't right for them. But what about in the future? As Ted is spending his three years working in the Galapagos, Alexis is working hard as a publicist in New York. Not only is she building her personal brand and network, but she's growing even more as an independent woman.

Once Ted comes back to the U.S., the two could easily bump into each other in Schitt's Creek if Alexis was visiting David and Patrick. Perhaps the pair gets to talking and the next thing you know, they're back together and splitting their time between Schitt's Creek and New York.

The family has spread out across the country, but chances are they'd at least come together for the winter holidays. And since Schitt's Creek holds the most sentimental value for all of them (and their closest friends live there as well), there's reason to believe the Roses have a Schitt's Creek-style Christmas every year.

Unless the family reunites for a movie (please?!), fans will just have to theorize about where the Roses are now. One thing's certain: They deserve simply the best.

All six seasons of Schitt's Creek are streaming on Netflix now.

More like this
10 Questions The ‘Schitt’s Creek’ Finale Left Unanswered
By Rachel Varina
These 'Schitt's Creek' David Memes Have The Perfect Amount Of Sass
By Dylan Kickham
Who Is Cleo On 'Outer Banks'? Carlacia Grant Is New To Season 2
By Ani Bundel
Stay up to date