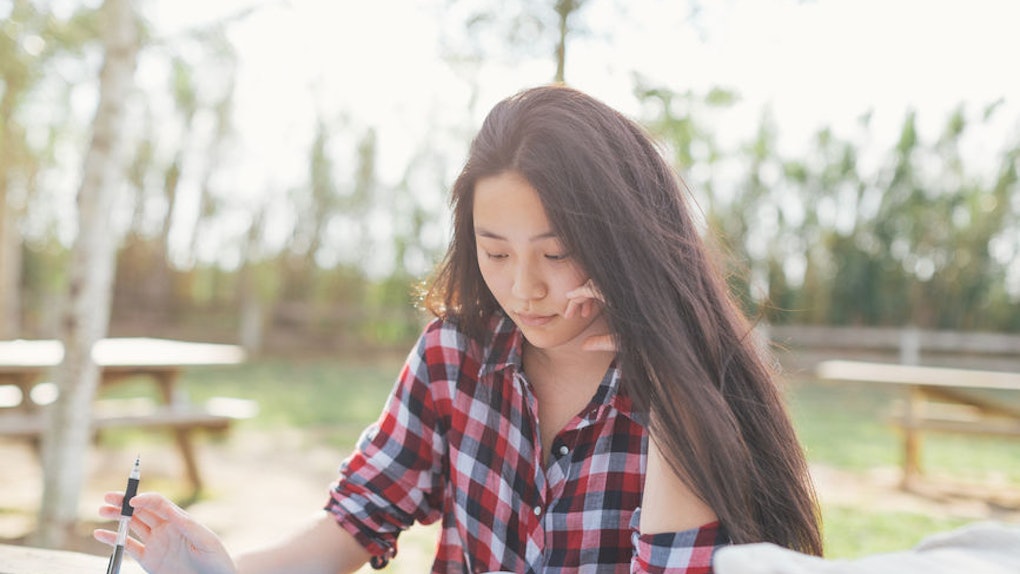 Who hasn't gone into the new school year with plans to be on top of everything? In the past, maybe you wanted to make a habit of beginning your homework the minute you got out of class, or to start going through multiple drafts of a term paper so you wouldn't have to rush through the night before the deadline. But then, a month into the school year, you were already putting things off again. Look, it happens to best of us, but it's exactly why you should go into the next semester armed with some resolutions for procrastination that will actually stick. The reality is, getting things done — and getting them done in a timely manner — isn't impossible in college; it just takes a little trial and error to figure out what works for you.

When it comes to the issue of procrastination, it's easy to get down on yourself for slipping up and losing track of time, especially if it happens when you're supposed to be working on a big assignment. But according to clinical psychologist Dr. Carla Marie Manly, it's so important to remember that all hope is not lost if you dropped the ball a bit on a paper or on studying for an exam. Chances are, you aren't going to wake up one morning with the time management skills of a robot; after all, college is about learning — not just about new subjects, but also about yourself and how you like to work.

According to Manly, many procrastinators are either so afraid of failure that they're hesitant to even begin their work, or they (often mistakenly) assume they do their best work when they're on a time crunch. Regardless, changing your habits takes time — it's not going to happen overnight. But where there is a will, there is a way to get things done on time. Here are some ways to stay committed to your goals this year and give up procrastination for good.

Stay Positive, Even If You Start To Slip Into Old Habits

It can be difficult to keep your chin up when you catch yourself falling back into habits you're hoping to outgrow. But Dr. Manly says there's no need to be so hard on yourself if you notice that you're doing this. "Especially for the 'I am afraid of failure' procrastinator, positive self-talk can be incredibly helpful," she says.

For example, Manly tells Elite Daily, if a deadline for a project is fast approaching and that pit of fear is welling up, you can probably accomplish way more than you realize just by writing positive messages on sticky notes (such as, "I learn from my mistakes"), repeating positive self-talk mantras (an example could be: "life is what I make it"), and creating a simple, achievable project outline for what you have to get done.

As you go along, Manly says, you can find even more motivation in the support of others, like students in your class or even teachers you really love. Chances are, these people know exactly where you're coming from, and better yet, they're probably more willing to help than you think.

Reward Yourself For Your Hard Work

According to Manly, sometimes the mere reassurance of knowing there's ice cream or a TV show waiting for you on the other end of your work is enough to motivate you to get down to business. "Try making simple lists, and decide on a reward for accomplishing each item on the list," she says.

For example, if cleaning your dorm room is on your to-do list, reward yourself with a walk around your favorite part of campus, or a trip to the dining hall for some dessert. You can even factor in these little rewards as fragments. Say you just finished cleaning the bathroom in your dorm room; you can always come back later to finish tidying up everything else, and Manly says you'll probably feel way more motivated to keep working by the time you return anyway. It's all about making these menial tasks enjoyable and doable, she says.

Create Some False Deadlines, And Stick To Them

This one may sound a little out there, but according to counselor and relationship expert David Bennett, it can be really helpful to have reminders and sub-deadlines, so to speak, because they'll keep you grounded and on a steady pace for completing your work.

First, Bennett says, put your actual deadline in your calendar. After that, schedule your own deadlines and due dates for completing drafts or certain steps in your project, which should all come before the actual deadline. "This breaks a complex task with a more distant deadline into smaller tasks with closer deadlines to keep you from putting it off," Bennett tells Elite Daily over email.

Resist The Urge To Compare Your Progress To Others'

It's not always easy to tune out what everyone else around you is doing or feeling, especially in college, but according to psychologist and positive life coach Dr. June Rousso, it's important for procrastinators to resist comparing themselves to others. After all, do you really care about what your classmates are up to, at least as far as schoolwork is concerned? Unless you're seeking a study buddy, Rousso says, stay focused on your progress, and yours alone.

"Work on the best work that you can without comparing how you are doing to your peers," she tells Elite Daily. "If you compare yourself too much to others, with you at the short end of the stick, this is a recipe for procrastination."

Remind Yourself There's No Such Thing As Perfection

Rousso says it's not uncommon for procrastinators to feel so overwhelmed by the pressure of doing something perfectly the first time around, that it makes them hesitant to even begin the task at all. "Get your ideas out there without judging them, then organize them later," she suggests. "Seeking perfection too often leads to our judging our ideas before we have a chance to play with them."

Remember, she adds: Everyone makes mistakes, so the real goal should be to challenge yourself to see what you can learn from these mistakes.

Accept That The Way You Spend Your Time Reflects Your Priorities

"Time management is all about priorities," Ben Soreff, a professional organizer and business owner, tells Elite Daily over email. "Fundamentally, if someone watches TV instead of mowing the lawn, they are actually prioritizing TV."

Soreff's point is a simple one, but it sort of puts everything into perspective, doesn't it? How you spend your time reflects how you organize your priorities — whether you consciously realize it or not. So if you're scrolling through Twitter and gasping at the latest Prince Harry and Meghan Markle memes instead of opening up your textbook to start studying for that philosophy exam, by Soreff's logic, this means the royal couple is higher on your list of priorities than your philosophy class.

Look, I get it: I love Meghan and Prince Harry as much as the next person, but considering that philosophy class probably has a bigger, real-life impact on you than the British royals do, maybe it's worth the effort to spend a little more time studying. Remember, you can always reward yourself with a quick break to re-watch the couple's wedding vows.