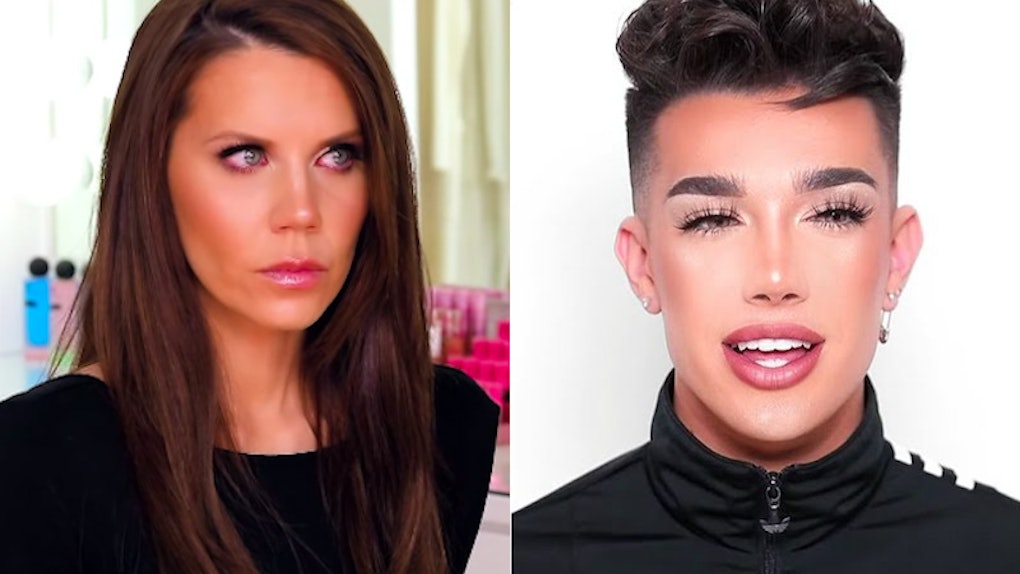 It's been a month or so since the James Charles and Tati Westbrook scandal shook the internet, and TBH I am still not recovered. Like, do these two former besties even speak to each other anymore? I know they both sort of issued public apologies for their shady behavior via YouTube, but neither of them ever actually retracted a single drop of tea so I just don't know where they really stand now, you know? And what about all the other supporting players? There were so many internet personalities and celebs who took sides in the James Charles and Tati Westbrook feud, and now that it's finally dunzo (we think) it's kind of hard to tell who is still friends with who anymore.

While we wait to see if yet another tea-spilling YouTube vid or tweet will drop, let's take a look back at all the people who threw themselves into the mix in order to join either #TeamTati or #TeamJames.

So, if you'll recall, this whole debacle started after Charles promoted SugarBear Hair sleep vitamins on Instagram. See, SugarBear is a big rival of Halo Beauty, Westbrook's brand of beauty vitamins. In response to Charles' promotion, Westbrook hit up her Instagram story in tears to reveal that she was feeling betrayed by someone who had been unloyal to her. She didn't name names, but it was clear that she was talking about Charles and his post for SugarBear Hair.

"I don't get where the betrayal was," he said in a YouTube video on May 4. "IG stories were posted. Moments later, she's crying on the internet. There's no communication behind the scenes. It's made out to be this big thing. James apologizes on IG stories. So all these videos are being made where James is being made out to be this horrible human being, and I'm just confused as to what happened. Oh, it's about loyalty, the loyalty aspect of it. For me, it looks like someone posted IG Stories and someone cried. I'm, like, confused because what did James do?"

Whoa. And this was before Westbrook posted her infamous (but now-deleted) "Bye Sister" takedown video! After that baby hit the internet, Zamora came for the OG beauty vlogger even more.

"You're omitting information," he said. "You're a fraud, Tati Westbrook!"

In the wake of Westbrook's many accusations in "Bye Sister" — including her claim that Charles is manipulative toward young men who don't identify as being gay — Charles started losing millions of followers, including celebs like Miley Cyrus, Ariana Grande, and Demi Lovato. And that's right around the time beauty vlogger Jeffree Star decided to weigh in with his own since-deleted tweet.

"There is a reason that Nathan banned James Charles from ever coming over to our home again," Star wrote on Twitter. "There’s a reason why I haven’t seen him since Tati's birthday in February. He is a danger to society. Everything Tati said is 100% true."

Star also tweeted a congratulatory message to Westbrook about her growing subscriber count at a time when Charles was losing millions.

“Huge congratulations to the makeup queen @GlamLifeGuru on hitting 6 MILLION subscribers on YouTube today!" he wrote. "You are one of a kind."

Pop star Zara Larsson also had something to say about Westbrook's "Bye Sister" accusations. She shared a clip of the vid on Twitter, then tacked on an interesting caption:

"I'm cackling cause he hit up my boyfriend in the DMs several times knowing damn well he's straight," she wrote in the now-deleted tweet.

Larsson later apologized for throwing herself into the mix.

"I always try my best to learn and apologize if I'm wrong," she tweeted. "I'm sorry @jamescharles for getting involved before I actually knew the truth and for the anxiety you must have felt about everything."

On May 14, beauty influencer Nikita Dragun stepped up to try and clear Charles' name by tweeting screenshots of a conversation she had with him on the night of Coachella about the SugarBear Hair promotion.

See, Westbrook thought Charles lied to her about the timing and depth of his relationship with SugarBear Hair. So Dragun rolled up to Twitter to share her screenshots in order to help prove that Charles' endorsement of the vitamins was, in fact, a last-minute deal he worked out in order to get extra security at the festival.

"Heard a situation needed some clarification," Dragun wrote. "My friend was in an emergency and texted me in the moment... I connected him with Sugar Bear. Nothing shady."

Katy Perry, who was once a CoverGirl ambassador with Charles, was one of the celebs who unfollowed him in the wake of the scandal. She also liked this video of a girl doing an interpretive dance to his apology to Westbrook, so read into that what you will:

(Disclaimer: She may also have just been here for those smooth moves. *shrug*)

YouTuber Shane Dawson also showed his support of Westbrook, and he did it by tweeting about how his skin had dramatically improved after using Halo Beauty.

"Drama aside, I have something to say," he tweeted, then included before and after pics of his face and a link to the Halo Beauty website.

"I have been using @halobeauty for 1 month and 2 weeks and it's really helped my skin and hair," he added. "My red patchy face has always been an insecurity of mine and I can genuinely say that @glamlifeguru's vitamins really worked for me. Thank you Tati for putting your heart and soul into his product and thank you for making me feel better about my face. Love u."

Dawson was seemingly giving Westbrook the shoutout for her beauty brand that she was looking for from Charles. So yeah, he's total #friend goals. And after Westbrook posted another now-deleted YouTube video calling for all the hate toward James to stop, Dawson weighed in again by giving the clip a retweet, and then adding on some heart emojis.

Honestly, this whole YouTube beauty guru drama has been confusing and exhausting AF. A lot of people took sides, things got ugly, and I'm just really glad it seems like it may all finally be over.

I mean, the only real winner here seems to be SugarBear Hair, a company that's now gotten so much exposure for its "revolutionary" vitamin gummies that I'm beginning to think they may be the ones who intentionally started this feud in the first place.