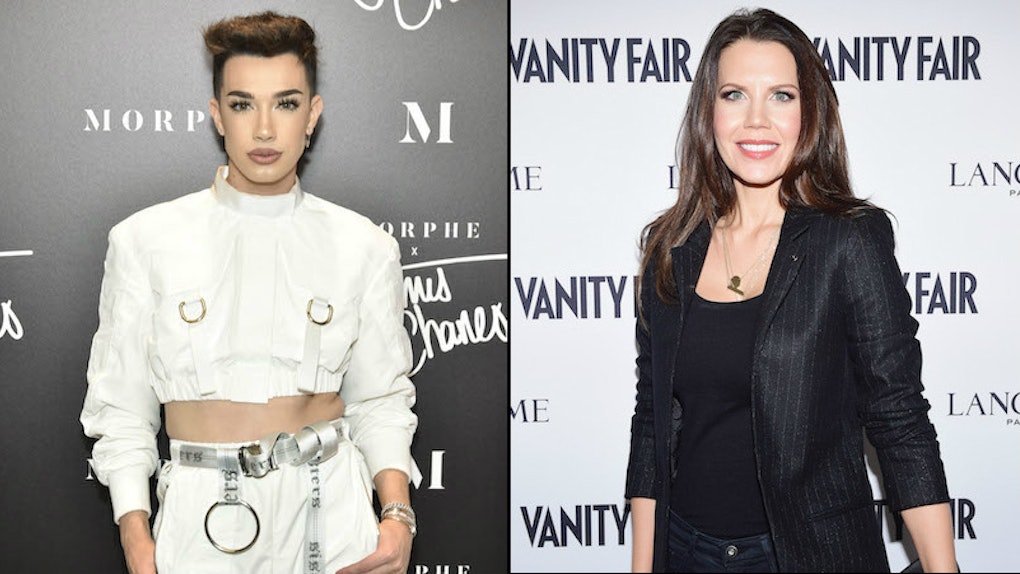 So how was your weekend? Did it fly by in two seconds since you were completely consumed with following all the James Charles/Tati Westbrook drama? Because same. From Westbrook's "BYE SISTER" video to James' subsequent apology, fans can't seem to tear themselves away from following the drama that's broken out between these two former besties. I mean, there’s a YouTube video dedicated to livestreaming a count of the number of subscribers that Westbrook is gaining and Charles is losing. But the timeline of James Charles and Tati Westbrook's friendship actually makes their current fallout all the more devastating.

The two YouTube beauty staples have been friends since 2016 when Westbrook (37) became a mentor of sorts to a then-relatively-unknown Charles (19), who slid into her DMs after going viral for retaking his yearbook photos with a ring light so his highlight would be poppin'.

"From the time that I met him when he was 17, I knew that he had a way of just getting what he wants," Westbrook explained in her infamous but still classy video severing ties with the younger YouTube star. "I've always blamed it on his age. Like, 'He'll grow up, it's fine, he'll grow up.' There is something in my heart that is pulled to him and I love him and I am there for this kid — through and through."

But Westbrook apparently reached her limit after Charles posted an ad for Sugar Bear Hair supplements to his Instagram story on April 22 (the brand is a direct competitor to her own Halo Beauty supplements). Charles later apologized in a statement posted to his Instagram story. But sadly, it seems it all came a little too late. Elite Daily reached out to Charles' team regarding Westbrooks' claims in her "BYE SISTER" video, but did not hear back by the time of publication.

Obviously, there are many, many more details to this whole sad story. So let's rewind a bit and retrace our steps, shall we?

Charles went viral for retaking that now-iconic yearbook photo, then reached out to Westbrook, who took the then-17-year-old on as a mentee.

"He always told me that I was the reason that he wanted to get into makeup and was inspired to start his channel," Westbrook explained in "BYE SISTER." "I made the choice that I was going to help him."

2017: Westbrook Flies Charles Out To Do Her Makeup For Her Wedding

Westbrook revealed in "BYE SISTER" that she invited Charles to her wedding and paid for his trip out. In exchange, he did her wedding makeup.

"It’s sad to think that I will never be able to watch my wedding video without seeing his face and thinking of him and thinking about all of the things I hoped our relationship would be," she said.

Westbrook gave Charles a major shoutout during the launch party for Halo Kiwi.

"James Charles, you are changing everything," she told him and the crowd as she fought back tears. "I love you so much!"

September 27, 2018: Westbrook Has Her First Falling Out With Charles

As revealed in her new video, Westbrook fell out with Charles in late September after he lashed out at Makeup Geek founder Marlena Stell on Twitter following her announcement that she had a behind-the-scenes beauty industry project in the works with Netflix.

"It was really hard to see the way he was treating Marlena from Makeup Geek, I did not like that," Westbrook explained. "It is not cool to publicly shame a woman who paved the way. Get off your high horse and have some respect, you don’t have any for people who are in this industry longer than you and that is the sad fact."

After the video was released, Westbrook posted a clip of herself to her own Instagram Story. She didn't name names, but she did say, through tears, that she was having a crappy day and felt "really lost" and "really lonely" in the industry because ~people~ continuously use each other to get ahead.

Two days later, Charles hit up his Insta to apologize in a statement to Westbrook and her husband.

"I want to publicly apologize to my close friend, Tati," Charles wrote, according to BuzzFeed. "She has been like a mother to me since my first days in this industry and has given me more love, support, resources and advice than I could ever ask for. This weekend I did an Instagram story for sleep vitamins that I’ve been taking because the brand helped me with security when the crowd around me at Coachella became unsafe. I did not accept any money from this post."

Welp, Westbrook didn't buy the apology, and on May 10 she posted the now-infamous "BYE SISTER" video, where she lamented that Charles still did not mention her Halo Beauty brand name in his apology, which only added to her suspicions that he had a contract with Sugar Bear, and was not simply doing them a favor in return for security.

Westbrook also revealed that she no longer wanted to be friends with Charles, and called some of his past behavior "disgusting" and "manipulative."

"It is more than one thing," she explained. "It wasn’t specifically just about vitamins or about Halo. But it was just about being lied to and feeling disrespected."

If you've got 43 minutes to spare, you can watch her whole takedown here:

May 10: Charles Responds With An 8-Minute Apology Video

Several hours after Westbrook shared her video, Charles posted an 8-minute apology of his own.

"I met Tati almost three years ago now," he explained. "When I was first coming into the industry and when I had no friends and nobody to talk to or look up to, Tati very quickly took on a parental role with me. Her and her husband have given me so much love and advice and opportunities... and support when nobody else would or wanted to. And I'm so disappointed in myself that I ruined our relationship."

The whole thing is just so unfortunate. What will happen next is anyone's guess. But I think it's safe to say that if there has to be a winner in this whole sordid mess, it's one Miss Jordyn Woods.

More like this
Taylor Swift & Olivia Rodrigo's Friendship Timeline Will Make Your Heart Grow 3 Sizes
By Brandy Robidoux
Lizzo's TikTok About DMing Chris Evans On Instagram Is Truly Hilarious
By Abby Monteil
Why Did Addison Rae Deactivate Her Twitter? Fans Think This Is The Reason
By Brandy Robidoux
Stay up to date