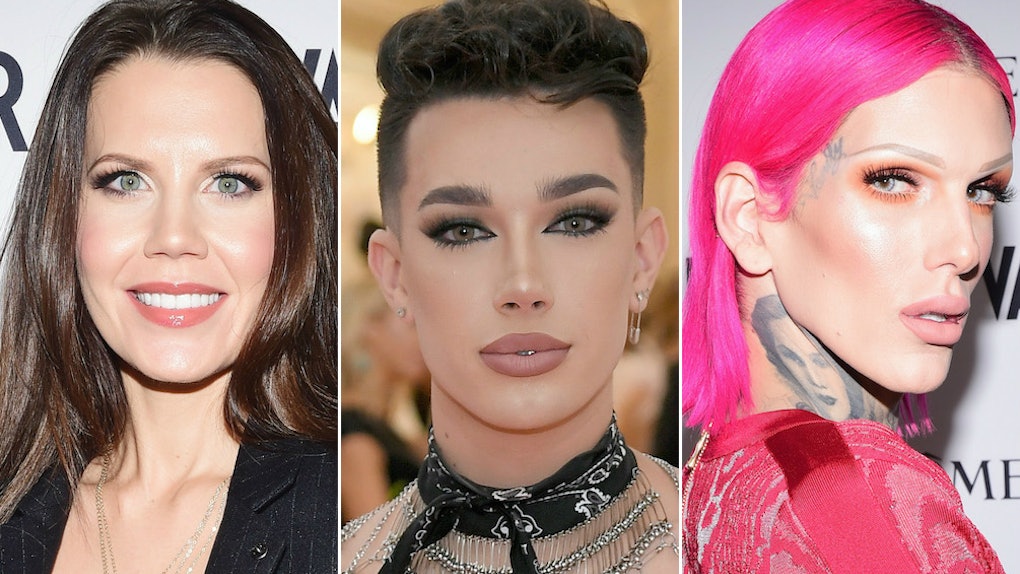 Sisters, put down your makeup brushes. It seems like the Tati Westbrook, James Charles, and Jeffree Star drama is finally over. Tati Westbrook and Jeffree Star's update on the James Charles drama makes it clear their intention is to end this fight, which is great since it feels like it's been going on for years. Will the world of YouTube makeup tutorials ever be the same?!

All of the drama started when Tati Westbrook dropped a 45-minute video titled "BYE SISTER" that accused James Charles of a whole world of things. Her decision to record and post the video, apparently, was triggered by Charles seemingly promoting Sugar Bear Hair gummies, Westbrook's competitor. She said she felt betrayed, so she let all the piping hot tea spill in the "BYE SISTER" video. She accused Charles of trying to "manipulate someone's sexuality," because, in her view, he was trying to manipulate straight men into hooking up with him. Elite Daily previously reached out to Charles team for comment on her claims, but did not hear back by the time of publication. Viewers could only take Westbrook's word when it came to these accusations, as she spoke from reported experience. Jeffree Star was staunchly Team Tati in all of this drama, releasing his own responses on Twitter and YouTube.

Charles had initially responded to Westbrook's first video in his own video titled "tati." It showed a clearly emotional Charles apologizing to Westbrook for making her feel betrayed. To sum it up quickly, Westbrook felt betrayed that Charles had seemingly posted a paid post from Sugar Bear Hair during Coachella. Charles claimed he was not paid to post anything for them, rather he posted about them as a thank you for helping him and his friends out with security during Coachella.

Nikita Dragun, a fellow YouTuber, tweeted reported text messages that showed the exchange between her and Charles, and then her and Sugar Bear Hair. The texts show Charles asking for help to get an artist pass (a ticket only celebs can access) because he was being overwhelmed with fans in the VIP section (to which fans can buy tickets). Based on Nikita's screenshots, the whole thing seemed really simple and far from a betrayal. Nikita and Sugar Bear Hair were just helping him out of a stressful situation, according to her.

Westbrook's whole story got thrown on its head when Charles released his own 45-minute video, "No More Lies," unpacking every accusation Westbrook and Star had made about him.

In the video, he makes things pretty damn clear. He has reported screenshots of texts, DMs, call histories, etc. to back up every claim he makes, and they seem to indicate that the relationship he had with a waiter named Sam was consensual before they broke up. It appears that this is the relationship Westbrook was referencing in her "BYE SISTER" video. Westbrook claimed that the man was straight, but in the screenshots of his and Charles' conversations, he says he's bisexual.

Charles defended himself even more against Westbrook's accusations of "manipulating someone's sexuality" by saying,

I am a 19-year-old virgin. I have never and will never use my fame, money, or my power to manipulate or get any sexual actions from a guy. That is disgusting. That is not me. The fact that Tati brought this up blows my mind.

Now, Star has released his own apology video called "Never Doing This Again" saying that he won't be continuing the drama on his end any further.

Westbrook has done the same, this time opting to tweet a statement (it's a screenshot of her notes app — classic) instead of a video.

"I have been in communication with James Charles... and we believe that it is in the best interest of our community, our viewers and our own mental health to put this matter to a rest," she said in the statement. "In my original video, I felt the need to publicly break up with James with a warning call loud enough for him to hear," she said in another part of the statement. "Although I do not regret raising my concerns, I completely regret the way I went about saying them. I could have and should have found a better way."

Charles responded to Westbrook and Star's respective statements in a tweet on May 19.

"Thank you @jeffreestar & @glamlifeguru for your sentiments. I am on board to move on, will not speak about this further, but do hope to speak in the future when we’re all ready," he tweeted. "This week was awful for all of us and I ask that the community focuses on positivity moving forward."

So, it looks like all of this drama is finally over. Westbrook has removed her "BYE SISTER" video from YouTube and the dust is seemingly starting to settle. And that's what you missed while you were busy living your life instead of watching YouTubers feud.