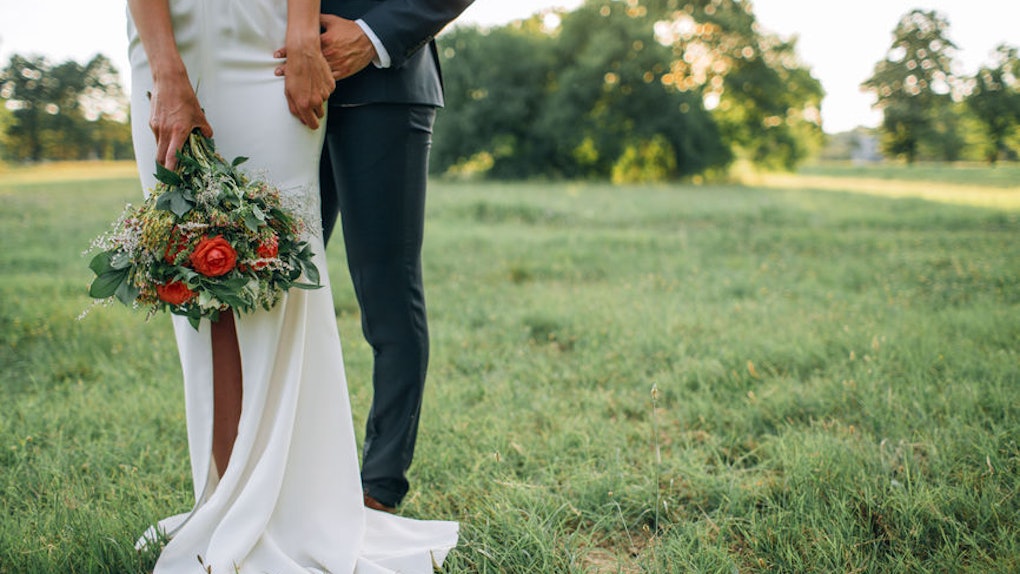 5 Military Wedding Traditions That Are SO Beautiful

It’s no secret that weddings are steeped in tradition. From wearing something blue to exchanging rings and tossing the bouquet to hopeful singles, many of the practices we witness at these events have been passed down for decades or even centuries. But did you know that there are special military wedding traditions that only couples in the armed forces abide by, too?

Indeed, wedding traditions vary depending on the culture and religion. Some couples choose to forgo them entirely. In the U.S, it’s customary for the bride to have her father walk her down the aisle, and for the couple to save the top tier of the wedding cake to enjoy on their one year anniversary. In Armenia, the bride and groom kick off the wedding reception by breaking a plate, balancing some lavash (bread) on their shoulders and eating spoonfuls of honey for good luck. In Greece, the best man shaves the groom’s face on the day of the wedding — and later, the groom’s mother in law feeds him almonds (sounds delightful, TBH).

In the same way that other cultures have their own unique traditions, so do military weddings — whether one or both spouses are currently enlisted or have previously served. Each branch even has some of its own set of unique traditions. Unsurprisingly, for example, it's very common to see patriotic decor at a military wedding reception or to play the service branch's song in the recessional. And sometimes, the wedding cake topper will feature the spouse(s) in uniform.

In order to honor their heroic work, here are some of the other special wedding rituals that are practiced by those in the armed forces.

While some military brides may opt for a traditional gown over a ceremonial uniform, The Knot notes that military grooms are expected to wear their uniform. However, they may wear their military attire during the ceremony and then change into a traditional tux for the reception. Regardless of what the couple wears, boutonnieres are almost never used — military decorations may be used in their place by the groom. However, the bride may hold a bouquet if she chooses.

There are also different levels of formality when it comes to the uniforms. While an officer's evening dress uniform is reserved strictly for a white-tie event, mess dress uniforms (typically dress blues) are appropriate for a wedding with a cocktail dress code.

Even the engagement rings for military weddings are unique. Very often, the groom will give the bride a copy of their academy class ring, according to Just Marry. This tradition is most common for Air Force cadets and Navy Midshipmen. The military ring can be worn in place of or in addition to a traditional diamond engagement ring, and may also be exchanged with a simple band during the ceremony.

A Specific Venue, Officiant, And Seating

Very often, military weddings take place at designated military chapels (which serve a range of religions), or otherwise, on the property of an Army, Navy or Air Force Academy. For couples who choose to get married in a military chapel, a chaplain performs the ceremony. And as a budget-friendly perk, since chaplains are commissioned officers who are paid by the service they represent, they perform the service free of charge to the couple. Best of all, military chaplains typically represent more than one faith, so they can be flexible in meeting the needs and preferences of every couple.

Commanding officers are generally treated as if they’re part of the family, which means they will often be seated near immediate relatives at the ceremony and in a place of honor at the reception. And according to The Knot, if the parents don’t happen to be present at the ceremony, then it’s customary for the commanding officers to sit in their place, in the front pew of the chapel. The seating position of the other military guests is dictated by their rank.

The Arch of Sabers

Without a doubt one of the coolest military wedding traditions is the saber arch, which the bride and groom to walk underneath. If either or both spouses are in the Air Force or Army, then it will be an arch of sabres, but if they’re in the Navy or Marine Corps, then it will be an arch of swords. Either six or eight members or bridal party ushers line up in pairs facing each other and hold the swords or sabres up (with the cutting edge facing up) to form an arch. The timing of when the bride and groom pass under it varies somewhat, but typically, this tradition takes place immediately after the ceremony ends (as the couple exits the chapel). Alternatively, some couples may walk under the arch as they enter the reception. According to BrideBox, when the bride and groom walks through the arch, it signifies a safe passage in a new phase of life as a married couple.

Speaking of swords and sabers — these blades are typically used to cut the cake as well. According to the U.S.Department of Defense's Military OneSource network, with the bride’s hands underneath the groom’s on the handle of the sword, they cut through it together.

Clearly, there is a bevy of traditions that make military weddings stand out, and each tradition offers up a meaningful way to pay homage to the time spent serving our country. Whether you and your spouse are considering a military wedding or you plan on attending one, being aware of these traditions can allow you to not only understand their symbolism, but also to honor and respect them. And even if you don’t have the chance to be a part of a military wedding, it’s still fun to learn about the different traditions that couples take part in to differentiate their “I do’s.” Let’s be real — who doesn’t want to cut their cake with a sword? Now that’s a custom I can get behind.