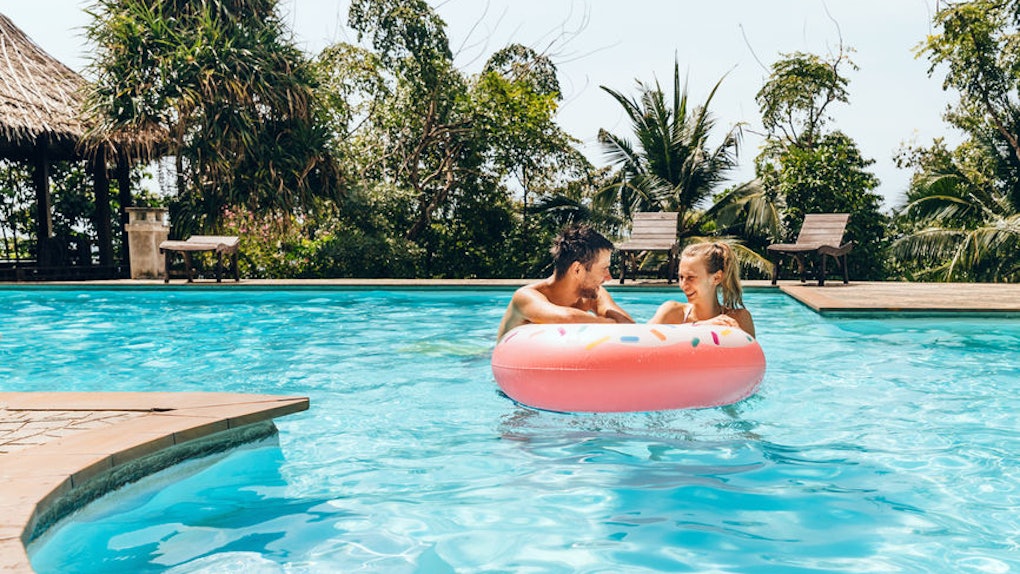 Despite considering myself a pretty staunch feminist, I have so many preconceived notions about heterosexual relationships. From "the guy should text first," to "the guy should pay," even if I know these things aren't facts of life, it's hard for me to let go of these old ideas when I'm dating. I usually wait for a guy to ask me out. I usually wait for a guy to bring up exclusivity. I'm my least outspoken self when dating, or at least I used to be. But finally acknowledging the double standards in relationships helped identify and get the eff over them. (Mostly.)

Almost a year ago, I started a project and podcast called "51 First Dates," with my BFF and business partner. We talk about dating, obviously, but I also go on one date a week. The goal of the podcast is about breaking bad dating habits, not just finding a boyfriend. Thirty-two dates later (dates bailed or rescheduled some weeks) a lot of people ask me exactly what dating habits I've learned to examine and/or break. The biggest realization I've had? That I have all of these internalized double standards in relationships and dating.

Before I started this podcast, I had never asked a man out. For 29 years, I always waited for a dude to ask me out first, even on the apps. Now, I feel embarrassed about that. Going on a date per week made it so that I had to message first, and ask dudes if they wanted to grab drinks first. I also leaned in for the kiss first for the first time in my life on a podcast date. I was very proud of myself.

I think it's important to think about some of the other double standards that we might blindly accept, no matter how forward-thinking we are. Especially once a relationship moves from dating territory into serious commitment territory. Here are some double standards you should never have to accept in your relationship. Spoiler alert: They work both ways.

1. Guys Should Confess Their Feelings First

I live in New York, where relationships are known to dissolve by the three-month mark. My theory on why? Nobody is communicating what they really want from each other. Remember that episode in the first season of Sex and The City where Carrie sees Big on another date and freaks out and assumes that he's ashamed of her? They hadn't defined the relationship!

Everyone should feel open and able to share what they are feeling and what they want whenever they are ready. You do not need to wait for the man to say, "I love you," first because here's the thing — he might just be shy or still processing how he's feeling. Nix this double standard forever, please.

2. Your Partner Can Have Friends Of The Opposite Gender, But You Can't

Whichever way this double standard goes, it's not fair. You and your partner should each be able to do what you want, when you want. (You know, except for cheating on each other if you're not in an open relationship.) Trust is important in a relationship, so talk to your partner if you feel like they are being controlling over who you are allowed to go out with.

3. One Of You Has To Reply To Texts (Fast), But The Other Doesn't

I always forget to respond to texts. It's not on purpose, and it's usually a flaw of my memory, even if I'm in a relationship with you. If one partner gets mad at the other when they don't reply immediately to a text, but then will also go hours leaving the other partner on read, that's the definition of a double standard. Communicate about how this makes you feel in order to get ahead of this problem.

5. Women Can Criticize Men's Appearances, But Not Vice Versa

Nobody should be commenting on anybody else's appearance in a negative way in a relationship. I've definitely made fun of men I've dated for their clothing choices, but I would be infuriated — and embarrassed — if they made fun of mine. This is unfair and falls under the "nopes" of relationships. Kindness rules! Especially if you're in love with a person.

Double standards in relationships are never OK. It's especially silly to expect people to act a certain way because of the sex they were assigned at birth. And once you take a critical look at your own ingrained ideas about dating, you might be surprised to find that your thoughts on the subject shift, too. I know mine did.