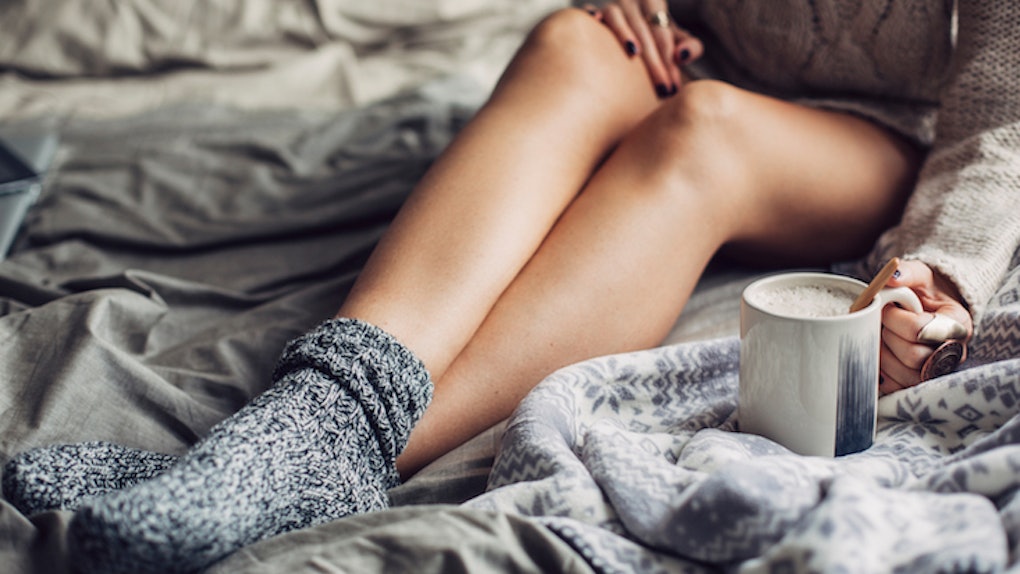 5 Benefits Of Being Single During Cuffing Season, According To Science

Although the end of the holiday season means distant relatives are less likely to aggressively ask why you're single, it doesn't exactly mark the end of cuffing season. Technically, cuffing season runs throughout the winter months so it's only just getting started. That means you'll still have to put up with that friend who's positive she found the love of her life this past November and who only wants the same for you. If your usual rebuttal about how much you genuinely love being single isn't cutting it, why not share the many benefits of being single during cuffing season with her?

Like, did you know that being single can actually make you healthier? It's true! When you're in a relationship, you tend to spend less time on self-care, falling into habits like working more and exercising less.

After I get out of a relationship, I'm always desperate to get back in touch with myself and to revisit personal needs that I neglected during my relationship. Don't get me wrong — I love having someone to Netflix and chill with or having a guaranteed kiss on New Year's Eve, but when I'm in a relationship, I tend to forget to do the things I liked doing for myself when I was single. It's not always a conscious choice, either. Sometimes being in a relationship simply means having to split your attention between you and your partner and that's OK.

Until then, you should enjoy the benefits of being single without feeling guilty about your relationship status. The truth is you're better off than you may think and here's why.

According to a 2014 study done by W. Bradford Wilcox, director of the National Marriage Project at the University of Virginia, and Robert Lerman, an economics professor at American University, single women earn larger annual incomes than their married colleagues of the same age. Specifically, women between the ages of 28 and 30 earn about $1,300 more than married women of the same age and this pay discrepancy increases as women get older.

Contrary to popular belief that getting into a relationship during cuffing season will help compensate for prolonged loneliness during the cold, winter months, single people are actually more socially engaged than those in committed relationships. According to a 2016 survey by the Bureau of Labor and Statistics, single men and women spend approximately 12 minutes per day — five more minutes than married people do — staying in touch with friends and family via phone and email.

The same goes for IRL connections, too. A recent study by Natalia Sarkisian and Naomi Gerstel of Boston College confirms that single people are more likely to socialize with parents, siblings, friends, and neighbors than those who are married. In fact, Sarkisian and Gerstel suggest that single people actually contribute significantly to a community's livelihood and that social policies should be developed with this in mind.

According to Psychology Today, single people work out far more regularly than people of any other relationship or marital status (married, divorced, separated, and widowed). Over the course of two weeks, single women reported getting almost five and a half hours of exercise in as opposed to married women who worked out for only four hours. According to TIME, several other studies have confirmed that this is true, including a 2011 British survey that revealed more than 60 percent of married women fail to complete the recommended 150 minutes of weekly exercise while only 30 percent of single women have trouble doing so.

If you've ever day-dreamed about falling face first on your books in the middle of class, you know the importance of getting a good night's sleep. Turns out, you're more likely to get a restful eight hours if you're single. A recent survey by Amerisleep suggests that single people get about 7.13 hours of sleep each night while people in relationships get 7.07 hours. People who are engaged to be married get 6.97 hours of sleep and people who are married get 6.71. Those who are separated get the least amount of sleep — only six hours each night.

The next time someone makes you feel bad about being single during cuffing season, ask them how they slept the night before. Feel free to let them know you slept like a baby, diagonally across your queen-sized bed, and had all the covers to yourself.