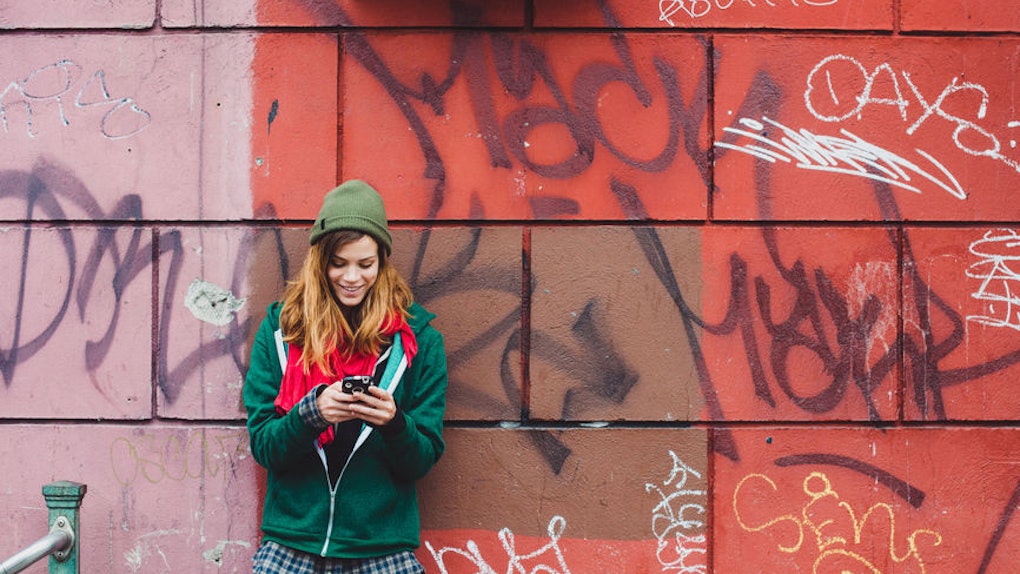 4 Texts To Send Your Crush To Make Plans, When "WYD" Isn't An Option

Inevitably, when I think back to my initial text exchanges with my current boyfriend, a not-so-subtle smirk creeps over my face. Every message was sent with such deliberation, such care. The major concern, of course, was locking down plans to see him again — all while maintaining a cool, casual exterior. Real talk: Crafting the perfect texts to send to your crush to make plans isn't easy.

While agonizing over how to make sure that we linked up in person, I recalled a tidbit of info he mentioned during our last conversation: his dad was in a band, and they had a gig coming up. And to my delight (full disclosure: I legit squealed this detail to my BFF later), he had nonchalantly mentioned that I should hear them sometime. So I mustered up the courage to send him a simple text: “Hey, I think you said your dad’s band is playing this month — when is that happening again? Want to get it in my calendar since work’s been crazy.” That gig turned out to be a pivotal event: afterward, he drove me home and we talked in his car until 5 a.m. — and then we eagerly made plans to hang out again the following weekend. The rest, as they say, is history.

Here’s the thing: Making a move via text may not seem like the bravest way to ask someone out, but undoubtedly, it's a tad less intimidating than asking them out IRL. And luckily, there are so many creative ways to get a date in the books right from your phone. Here are a few of my foolproof favorites.

The “Light At The End Of The Tunnel” Text

I’ve been dreading that chem exam so hard… grab some food with me after so I have something to look forward to?

When I was having a particularly hectic work week, I remember sending something very similar to this to my now BF. Fortunately, he caught on and took the bait. It’s pretty straightforward: You’re letting them know that seeing them would be a treat to get you through all the stress. And that’s bound to make them feel pretty darn good.

Ugh, I have to go to this networking thing… come with me to make it less cringeworthy? I’ll buy you a drink afterward…

Use any obligatory event as an opportunity to ask your crush to be your date. It suggests that they’ll make a potentially boring time far more bearable. Plus, by adding that tidbit at the end about offering to buy them a drink (or dinner, or dessert) as an extra incentive, you’re letting them know that you value their company beyond just being some arm candy for that event. In fact, you like them so much that you want to get to know them one on one once the shebang is over.

The “This Made Me Think Of You" Text

Think I remember you saying you’re super into craft IPAs… looks like a new brewery just opened up in my neighborhood! Check it out with me?

It pays off to really soak up those small details your crush drops into a conversation because any hobby or interest of theirs provides the perfect opportunity to reach out and make plans. Scope out local event calendars to see if there are any happenings they’d be hyped about. This is a stellar text to send not only because you’re proposing plans that include their interests (meaning they’re more likely to be down), but also because it shows that you care enough to listen and remember the things they’ve told you about themselves.

The “Romance On A Budget Text"

Just saw that a restaurant near me has a paella feast for two deal on Thursdays… sooo any chance you’ll be craving some authentic Spanish cuisine later this week?

Step one: Google “date night deals in [your city].” Step two: Use that knowledge to ask your crush on a wallet-friendly date. This is just the right amount of coy, but still totally direct. Best of all, you’re asking them out on a specific night. Asking vague questions like “want to have dinner sometime?” is basically the kiss of death when it comes to date planning. Choosing a particular night makes it a lot more likely that you’ll both actually make it happen.

There is no formula for the perfect text to send your crush when you want to make plans, but these are effective because A) they clearly demonstrate your interest in them and B) they suggest something specific for you both to do together. So, what are you waiting for? Get typing — you may be one text away from locking down a mind-blowing date with your future bae.