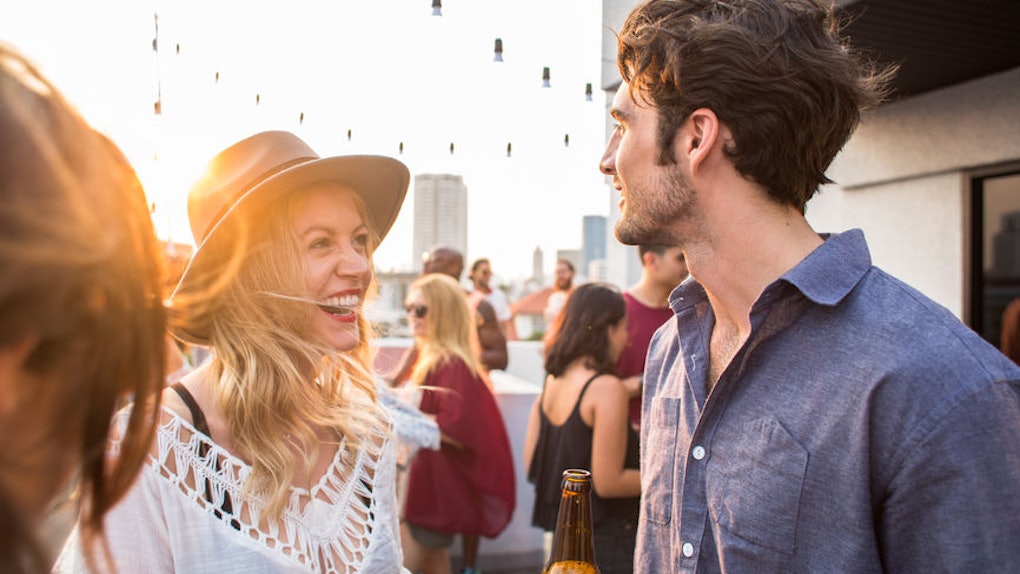 How To Ask Someone Out In Real Life, According To A Celebrity Matchmaker

Asking someone out in real life is a lost art. It seems silly, because it's actually such an easy thing to do. But when you factor in the surge in popularity of online dating and dating apps, the outdated stigma against women asking men on dates, and the fact that people are pretty much always on their phones in public, the odds do feel like they're stacked against us girls when it comes to asking people out. Knowing how to ask someone out in real life is a valuable skill to have, so I spoke to Alessandra Conti, celebrity matchmaker at Matchmakers In The City, about strategies for starting an IRL conversation and getting up the confidence to close the deal.

"We are taught that we should never approach a guy, and only speak to guys who approach us. The problem with this antiquated way of meeting men is that unfortunately, men are not approaching women thanks to a variety of factors — the prime being the minimal risk of rejection on dating apps compared to the major risk of rejection IRL," says Conti. No matter what your sexuality is or who you're trying to ask out, fear of rejection is valid. For women who are into women, there's no "script" for who should ask out whom. This can be nice, but it doesn't eliminate the worry that the person might say no.

Especially if you're the kind of boss who is used to going after what you want in your career and everyday life, you likely don't want to sit on the sidelines when it comes to dating, either. There are a variety of ways to ask someone out in real life that won't come off as aggressive or awkward, according to Conti. Here are her four best tips for scoring a date.

1. Come up with an unrelated question.

"I always say that the first step to approaching a man is coming up with an indirect question that is completely unrelated to him," says Conti. "If you are at a coffee shop, ask him what is in a Soy Caramel Flan Latte. If you are at a restaurant with a girlfriend, ask him to take a photo of you, and follow up the photo with, 'Oh my goodness, this is a gorgeous photo! Are you a photographer?'" The goal when interacting with someone who you don't already know is to ask an indirect question that leads into a natural conversation. Any small detail you notice can be used as your way in. Are they walking a puppy that's almost as cute as them? Ask what kind of dog it is. The list goes on and on.

If you're talking to someone new, such as a person you met through a mutual friend, you don't need to be too direct. Before you ask them point blank to go out with you, Conti suggests getting into a rhythm. "There is nothing more jarring or awkward than a random person just saying, 'Do you want to go out with me?' without any context," she explains. Before you ask him or her out, try to get to know each other in more of a group or friend setting. "If you see him out with his friends, invite him and the group to another event where you can spend a little more time getting to know him," Conti suggests.

Enter the conversation confidently. Go into the interaction thinking that this person is already into you. "If you are excited about [someone], come from a place of positivity, and you will then find yourself acting like the best version of yourself," says Conti. She believes that the most confident women end up with the best matches. "It's not because they are the prettiest or have the most amazing figures, or are the best dressed. It's that they are comfortable with who they are, and they are not afraid to be themselves and let loose when they are chatting with a potential love interest," she says.

4. End the conversation by giving them your number.

"If a guy specifically goes out of his way to chat with you at a party for a bit longer than a social hello, or asks you specific questions about yourself to get to know you, there is totally potential," says Conti. Once you've had a short conversation, the best way to end it is by giving them your number. Saying, "It was so much fun to chat with you, but I have to run. Here, take my number!" is a low-pressure way to put the ball in their court. There are no expectations and it's not too pushy.

Asking someone out IRL doesn't need to be intimidating. Be confident, yet casual, and don't feel like this is your one and only chance. Once you master the art of asking someone on a date, you'll want to do it all the time.