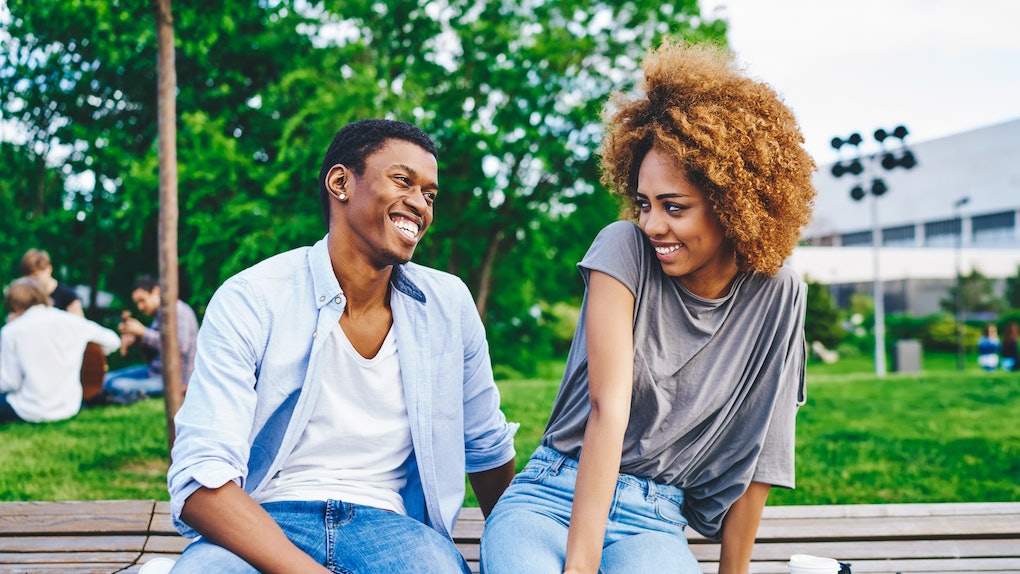 Everyone has their own unique way of flirting, whether that means engaging in witty banter, light teasing, or strong eye contact. One thing's for sure: Some people just seem to be natural-born flirts. And as it turns out, the Myers-Briggs personality types that flirt constantly tend to share several qualities, including Extroversion and Sensing.

It’s no surprise that extroverts tend to be more outwardly flirty. These types feel most energized by being around other people, and therefore, tend to navigate social situations with ease. Extroverts are also known as "open books" — always willing to share what's on their mind. Sensors, meanwhile, are “here and now” people who are super in touch with their senses and surroundings in the present, and tend to notice even the smallest details. Not only that, but they also have a knack for using information from their past experiences to inform their decisions in the moment. In other words, they can learn from every interaction to continually sharpen their flirting skills.

That’s not to say that personalities with a preference for Introversion or Intuition can’t flirt, of course — every type has their own special way of showing someone that they’re interested. But these four personality types just can’t seem to turn off the charm.

Whether you’re at a house party or a networking event, it’s hard to miss The Entrepreneur. These ultra-charismatic, playful individuals have a way of working the room, and can easily strike up conversations with strangers.

Since ESTPs have a certain approachability that puts people at ease, they can engage with nearly any other personality type, drawing them out of their shell with finesse. Plus, they’re “doers” through and through: They enjoy taking charge in any situation and making things happen, so they have no problem making the first move.

It’s also worth noting that Extroverted Sensor types like the ESTP are sensation seekers who thrive on physical thrills. Basically, they get a rush from putting themselves out there, which is why they can typically be found flirting up a storm in any social situation.

Fun-loving, passionate, and vivacious, the ESFP is known as “The Entertainer” with good reason. They have a knack for keeping a discussion endlessly interesting and amusing. Part of the reason ESFPs have such an easy time flirting is that they’re naturally confident individuals, and they rarely feel nervous interacting with others, even those they have a crush on. They’re also not risk-averse in the slightest, so they won’t hesitate to approach a cute stranger at a party, on the subway, or after class to strike up a convo.

The ESFP’s natural spontaneity comes into play when they're crushing on someone, too. They take chances without a second thought and go after whatever or whoever they want. Since this personality type tends to be physically affectionate, they may casually brush your arm or touch your leg or shoulder while conversing with you without even realizing it. Breaking the touch barrier is one of the most forward ways to flirt, and the ESFP is a pro at it.

The Consul is warm-hearted, sensitive, and genuinely interested in your well-being. When they flirt with you, you’ll sense all of those positive qualities, because they're great at making people feel seen, heard, and understood. Part of what makes them so adept at flirting is their ability to pick up on subtle social cues, and adjust their tactics according to the vibes you’re giving off.

But even though the ESFJ makes flirting look easy-peasy, note that they also make incredibly devoted and loyal partners. Sometimes, their behavior gets mistaken as flirting when really they're just their social and caring selves. When it comes down to it, this personality type loves making other people feel good about themselves, so their unintentional flirting is usually meaningless. In fact, the ESFJ tends to have a rock-solid moral code and value system, and they take their romantic commitments super seriously.

If you happen to be one of these personality types — congrats, you've probably got some serious game when it comes to dating. And if you're in a relationship with one of these types, remember that just because flirtatiousness is a part of your partner's personality doesn't mean that you can't say something about it if it makes you feel uncomfortable. You're entitled to your own perspective on just how harmless this kind of behavior is (or isn't). And with that — happy flirting, fam.