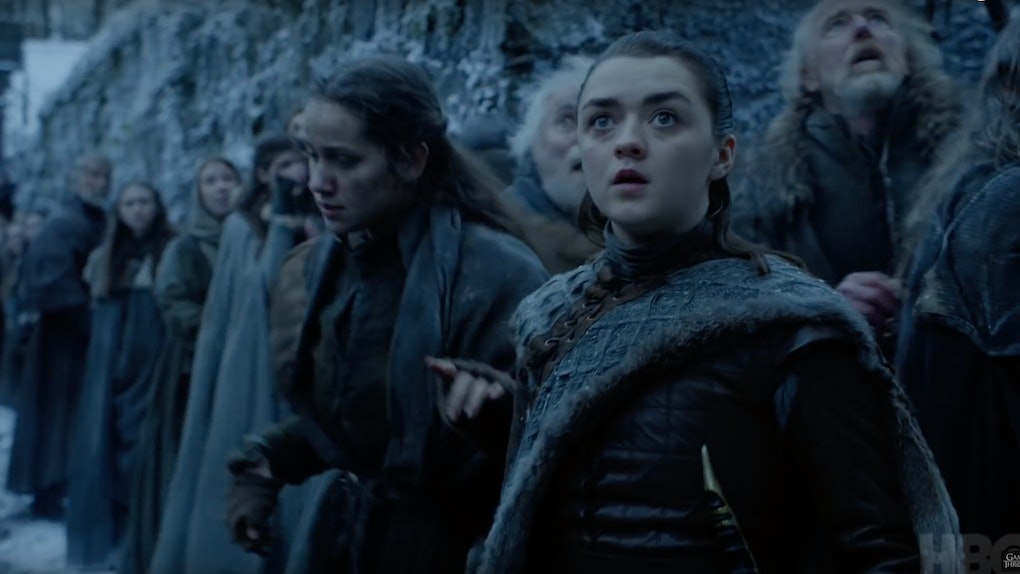 23 'Game Of Thrones' Captions For Instagram, Because Summer Is Coming

If I had to take a wild guess, I'd say you know at least a few things about Game of Thrones. Nowadays, it's hard not to know the names of characters like Jon Snow, Daenerys Targaryen, and Tyrion Lannister, along with quotes like, "Winter is coming." Because you really can't go on social media without finding a meme, a spoiler, or a tweet about the epic theories that circle around this iconic show. It's a lot to keep up with, even for hardcore fans who spend every Sunday night cheering on Arya Stark as she defeats her enemies. That's why I'm here to give you some Game of Thrones captions for Instagram, so you don't need to keep track of the best quotes from each episode and the never-ending plot details.

Now, just in case you didn't know, the world is currently in the heat of the last season of Game of Thrones. On Sunday, May 19 at 9 p.m. ET, the finale will air on HBO, and it's expected to have every viewer sitting on the edge of their seat. (Would you honestly expect anything less, though?) Like most episodes of this show, I assume it will be filled with lots of scenes that will tug on fans' heartstrings. However, I will be tuning into the action via social media and watching everybody's reactions — to the coffee cup that wasn't edited out, the Mad Queen's next moves, and who will ultimately sit on the Iron Throne — flow onto my feed.

To me, the reactions and how dedicated fans are to the character developments and the dreadful goodbyes, are the best part of this show. I haven't seen every single episode, but those reactions alone have taught me so much about the battles to come and the importance of quotes like, "Winter is coming." So I feel pretty qualified to give you these 23 Game of Thrones captions for your summertime Instagram posts, and to wish you a solid "good luck" as the finale streams on your screen.

1. "Life is full of these little ironies." — Tyrion Lannister

3. "I understand the way this game is played." — Tyrion Lannister

7. "In winter we must protect ourselves. Look after one another." — Arya Stark

8. "A lion does not concern himself with the opinion of sheep." — Tywin Lannister

9. "Never forget what you are, the rest of the world will not. Wear it like armor and it can never be used to hurt you." — Tyrion Lannister

12. "Any fool with a bit of luck can find himself born into power. But earning it for yourself, that takes work." — Lord Varys

13. "The freedom to make my own mistakes was all I ever wanted." — Mance Rayder

14. "Nobody does. Until they ride a dragon." — Daenerys Targaryen

15. "I'm not going to stop the wheel, I'm going to break the wheel." — Daenerys Targaryen

17. "There are times you make me wonder whose side you're on." — Jaime Lannister

22. "When you play the game of thrones, you win or you die." — Cersei Lannister

23. "When the snows fall, and the white winds blow, the lone wolf dies, but the pack survives." — Sansa Stark

You may be wondering, "What kind of Instagram posts can I use a Game of Thrones caption on?" That's understandable, so let me give you some #inspo, too. You can use these quotes and iconic lines for pictures with your besties or SO when you're on a grand adventure. You can use them on your particularly sassy selfies, or pics of your laptop screen that you take when you're watching the finale.

The key is to get creative and think outside of the box. Before you know it, you'll be slaying the 'Gram and coining your own phrases like, "Summer is coming."