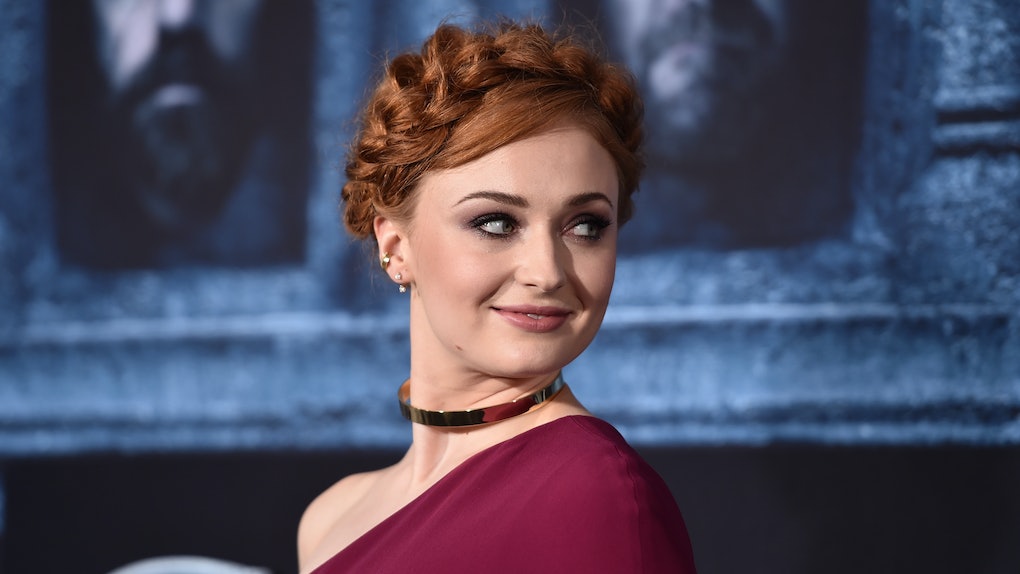 If you've been keeping up with the Game of Thrones coffee cup-gate and have been wondering which cast or crew member is responsible for the slight snafu, I'm happy to report there's finally a possible suspect. Thanks to Game of Thrones actor Sophie Turner, who plays Sansa Stark in the series, the world may soon have an answer to 2019's biggest whodunnit. Sophie Turner's comments on that Game of Thrones coffee cup make so much sense when you think about it. Warning: this hard-hitting investigation may contain spoilers if you're not caught up with the show.

On Friday, May 10, Turner appeared on The Tonight Show Starring Jimmy Fallon where she talked about Game of Thrones, her recent marriage to Joe Jonas, and yes, that coffee cup. The coffee cup question came up when Fallon told Turner he wanted to watch a question sent in by a fan named "Joe." Turns out, that fan was none other than Joe Jonas who asked Turner the question we've all been dying to ask her ourselves. He says,

Oh my god, hi, Sophie Turner. I'm Joe Jonas, I'm a huge fan. I honestly have a crush on you but I've got a big question for you. I watch a lot of Game of Thrones and I was wondering: you're definitely responsible for that coffee cup, right?

After Jonas asks the question, Fallon pulls out what he thinks is ample evidence to suggest Turner was the culprit. He shows the audience a photo of Turner posing with Bella Ramsey, who plays Lyanna Mormont. In the photo, Turner is holding a disposable coffee cup, similar to the one caught on-screen during Game of Thrones.

In response, Sophie demands, "Let's clear this up." After explaining her photo with the disposable cup was taken during an earlier episode, she picks up a photo of a still of the coffee cup and says, "I mean look at who it's placed in front of. Emilia Clarke. She's the culprit."

Fallon asked Turner if the actors noticed the error, and Turner revealed that there was just one text from Nikolaj Coster-Waldau who plays Jamie Lannister that said, "[G]reat episode, is that a coffee cup?" LOL, yup!

In case you haven't seen the original shot of the cup, this video shows exactly when it appears during Season 8 Episode 4 of Game of Thrones. It seems like the people of Westeros were celebrating their victory in the war against the White Walkers with booze, giant's milk, and a little bit of caffeine in a modern-day coffee cup.

If you think about Turner's response, it makes a lot of sense that Clarke would be the person who was enjoying some caffeinated goodness before the scene. The cup is placed right in front of Clarke's character Daenerys Targaryen, so unless someone else placed it there to frame her for coffee cup-gate, Turner may have given us all the answer. Plus, Clarke herself hinted that it may be her in a recent Instagram post where she's seen holding, you guessed it, a disposable coffee cup. She captioned the May 9 Instagram post:

Did I just stumble upon the truth here?! The cup bearer does not drinketh the Starbucks tea... oh and this ain’t a spoiler just a lost wanderer coming home for a mid filming cuppa....

Though the disposable cup had a good run, HBO has digitally removed it from the episode so fans who want to relive the cup moment wont be able to directly through HBO. On May 6, the official Game of Thrones Twitter account tweeted a message saying, "News from Winterfell. The latte that appeared in the episode was a mistake. Daenerys had ordered an herbal tea."

Whether the Mother of Dragons was actually the culprit or not, we may never know. But at least the Game of Thrones coffee cup will go down in history as the most entertaining beverage of all time.