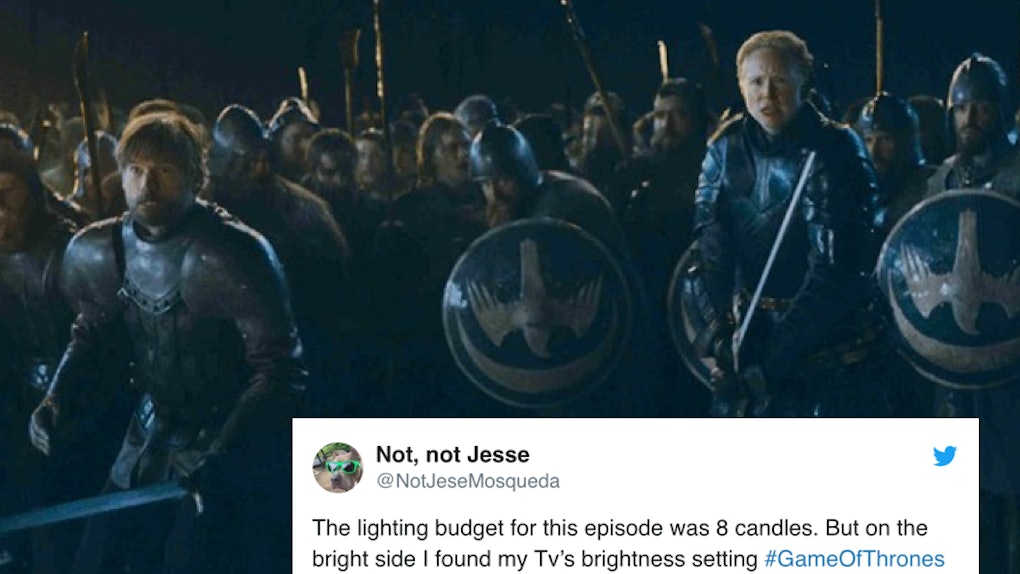 The Battle of Winterfell has come and gone in Game of Thrones Season 8 Episode 3. The fight against the Night King's army of the dead is finally over, and the living won. Of course, the battle was not without its casualties, and more than a few good men were lost... at least fans think so. It was a little hard for GOT viewers to tell exactly who was killed and who survived during the Battle of Winterfell because the episode had such little light. Over the course of the series, GOT has gotten darker and darker, and not just emotionally. The show has literally been lit with less light as the seasons have progressed, and that was especially true in this latest episode. In fact, the lighting (or lack thereof) quickly became meme-worthy, and there are some tweets about the lighting on Game of Thrones will definitely crack you up.

The Battle of Winterfell in Season 8 Episode 3 takes place outside and at night, in a time and place where artificial sources of light are not really a thing. So it makes sense that the characters don't have a lot of light to work with. That said, it's also a TV show, and the creators could have maybe made the viewing experience a little easier on audience's eyes. But alas, audiences were forced to squint their way through the movie-length episode. At least fans got some really funny tweets out of it.

While the producers of GOT didn't provide much light, one character did. Melisandre showed up at the beginning of the episode after being MIA for the better part of last season. She used her Lord of Light magic to conjure some fire that could be used as a weapon against the Night King's army. The fire was also an excellent resource to the audience, who could finally a see more of the action thanks to the glow of Melisandre's flames.

The lack of lighting in GOT Season 8 Episode 3 was more than just annoying. It also posed a problem for audiences who were trying to keep track of the survivors during the battle. When all of the characters look like big black blobs, it's pretty hard to distinguish one blob from another.

For the record, even though this tweet voices some confusion over Jaime's safety, he made it through the battle along with a bunch of other important characters.

According to the creatives behind the show, the lack of lighting is totally intentional. In 2017, Robert McLachlan, who's been the cinematographer on a number of GOT episodes, explained to INSIDER that he and the rest of his team purposefully don't add a lot of light to the GOT sets. They want to make it seem as realistic as possible, as if the characters are being lit by just Mother Nature, and maybe a few candles. He said:

If you watch season one again, there's a lot of unmotivated backlight. Even day exteriors, you can tell that they've been lit. The cinematographers who've been doing it since then, I think we're all very much on the same page where we're trying to be as naturalistic as possible.

The next episode is mostly set in King's Landing and the promo shows plenty of daylight, so fans should be able to see much easier. You can see for yourself when GOT Season 8 Episode 3 airs at 9 P.M. ET, May 5, on HBO.

More like this
This 2021 'Game Of Thrones' Season 8 Trailer Is So Confusing... & So Good
By Ani Bundel
Simu Liu's Tweets About The 'Kim's Convenience' Finale Promise "Tea & Receipts"
By Dylan Kickham
These Tweets About Regé-Jean Page Leaving 'Bridgerton' Are Royal Bummers
By Cianna Garrison
Stay up to date