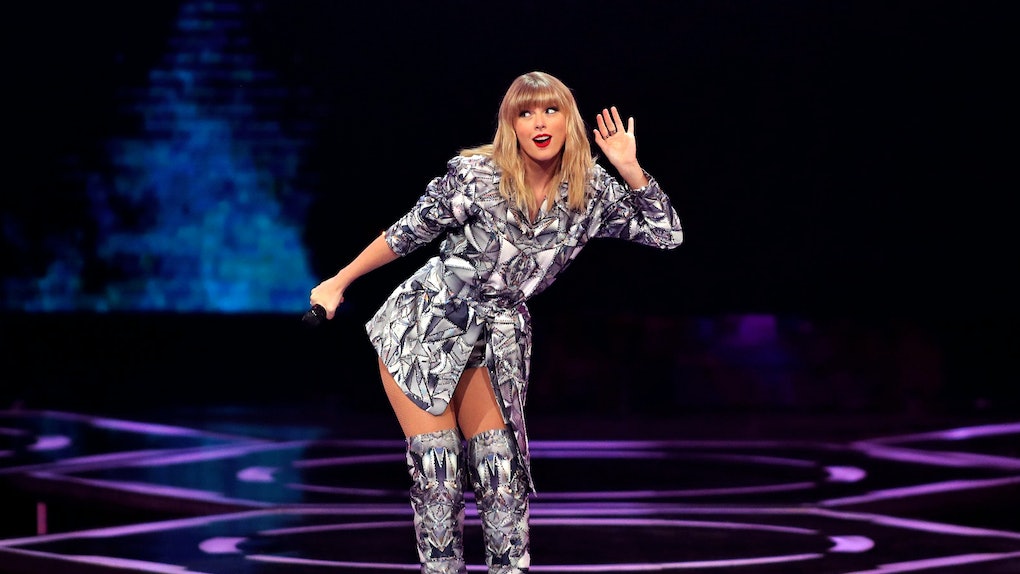 16 Taylor Swift Songs To Listen To After A Breakup, 'Cause She's The Queen Of Heartbreak

After a soul-crushing split, listening to a song that reflects on a similar experience can usually make you feel a little bit less alone. And who's more reliable for such comfort than Taylor Swift? After all, she's covered pretty much every breakup mood possible — from bitterness to wistful regret and everything in between. While there are literally dozens of Taylor Swift songs to listen to after a breakup, the ones that stand out are the ones that showcase her signature emotional honesty and vulnerability.

During her Tiny Desk concert for NPR, Swift explained that one reason why she's penned so many breakup jams is that songwriting is such a cathartic experience for her. It makes sense, too — having dated such celebs as Joe Jonas, Jake Gyllenhaal, Calvin Harris, and Tom Hiddleston, just to name a few, she's gone through quite a few high-profile breakups over the years.

“A heartbroken person is unlike any other person," Swift told Elle in a 2015 interview. “It’s this mental, physical, emotional ache and feeling so conflicted. Nothing distracts you from it. Then time passes, and the more you live your life and create new habits, you get used to not having a text message every morning saying, ‘Hello, beautiful. Good morning.’ You get used to not calling someone at night to tell them how your day was."

If there's one thing you can say about Swift, it's that she doesn't shy away from digging deep into all the uncomfortable facets of breakups — from the awkwardness of running into your ex to the guilt you feel for letting a romance play out that you knew wasn't going anywhere. These songs can be just as therapeutic for you to listen to as they were for Swift to write. So, whether you're still crying your eyes out after a blindsiding breakup, or finally starting to get over your ex, these are the songs you'll want to put on full blast.

In dreams / I meet you in warm conversation / We both wake in lonely beds / In different cities / And time is taking its sweet time erasing you.

This melancholy, stripped-down ballad is brimming with the kind of longing you feel after a beautiful yet tragic love ends.

You find yourself at my door / Just like all those times before. You wear your best apology / But I was there to watch you leave ... This is the last time I'm asking you why / You break my heart in the blink of an eye.

You know those exes you keep going back to, even though you know you shouldn't? Yeah. That's precisely what this heart-wrenching duet featuring Gary Lightbody is about.

I was a dreamer before you went and let me down / Now it's too late for you / And your white horse ... 'Cause I'm not your princess, this ain't a fairytale / I'm gonna find someone someday who might actually treat me well.

Swift definitely knows what it's like to realize your ex wasn't who you thought they were at the beginning of the relationship — and she articulates it perfectly in this tune.

People are people / And sometimes we change our minds / But it's killing me to see you go after all this time.

In this duet, Swift and Colbie Caillat sing about how hard it is to say goodbye to someone you still love. In addition to the relatable lyrics ("I can't breathe without you, but I have to"), the gorgeous harmonies are definitely a highlight.

So I punched a hole in the roof / Let the flood carry away all my pictures of you... That's when I could finally breathe / And by morning, gone was any trace of you... I think I am finally clean.

In a 2015 interview with Elle, Swift explained that she wrote this song in London after it dawned on her that she had been in the same city as one of her exes — many have speculated about Harry Styles — for two weeks and she hadn't even thought about it. That realization led her to believe that she had finally moved on.

"When it did hit me, it was like, ‘Oh, I hope he’s doing well,'" she explained to the magazine. "And nothing else."

Between the catchy melody and the clever lyrics, this breakup song is an absolute bop.

You call me up again just to break me like a promise / So casually cruel in the name of being honest.

Swift once said that if she included everything she wanted to in this song, it would have been 10 minutes long — and TBH, I don't think anyone would've minded, because it's just that good.

It's been said that this song is about her relationship with Jake Gyllenhaal, and it's brimming with specific deets that definitely support that theory. Regardless, the raw emotions and vivid images she weaves together — like her ex holding onto a scarf she left behind, and him running a red light while he's looking over at her — are oh so poetic.

When you think happiness / I hope you think that little black dress / Think of my head on your chest / And my old faded blue jeans.

"The idea for this song came to me in math class," Swift said in a press release. "I was dating a guy who moved away, and it was going to be over for us. So I started thinking of things that I knew would remind him of me."

When you're in the mood for a throwback from Swift's country days, this bittersweet breakup song should fit the bill.

"X" marks the spot where we fell apart / He poisoned the well, every man for himself / I knew it from the first Old Fashioned, we were cursed / It hit you like a shotgun shot to the heart.

There's a lot of evidence pointing to the possibility that this song is about her whirlwind romance with Tom Hiddleston — which happened right after her relationship with Calvin Harris ended. Whether you just ended a rebound situation or you knew the relationship was doomed from the beginning, the ultra-honest lyrics in this one should resonate.

“The Story of Us”

Now I'm standing alone in a crowded room / And we're not speaking / And I'm dying to know / Is it killing you like it's killing me?

Real talk: running into an ex is awkward. Do you duck and run? Acknowledge them? And what do you say? Swift explores all of these dilemmas and more in this upbeat little number.

Maybe this is wishful thinking / Probably mindless dreaming / But if we loved again, I swear I'd love you right ... I'd go back in time and change it but I can't / So if the chain is on your door I understand.

Swift briefly dated Taylor Lautner after meeting him on the set of Valentine's Day (RIP #TaySquared) — and he has since confirmed that this song is about him. If you're the one who ended things — and you're kind of regretting it TBH, let Swift put the perfect words to your pain with this song.

State the obvious, I didn't get my perfect fantasy / I realize you love yourself more than you could ever love me / So go and tell your friends that I'm obsessive and crazy.

Feel like your last relationship was a big waste of time? This is the kind of angsty country jam you'll wanna crank at full volume and scream-sing in your car. 'Nuff said.

Losing him was blue like I'd never known / Missing him was dark grey, all alone / Forgetting him was like trying to know somebody you never met.

In a teaser for Rolling Stone and Amazon Music's 500 Greatest Albums podcast, Swift explained: "I look back on this [Red] as my true breakup album, every other album has flickers of different things. But this was an album that I wrote specifically about pure, absolute, to the core, heartbreak.”

The title song off the album delves into the intensity and emotional highs and lows of a particularly impactful relationship.

But now I'll go sit on the floor / Wearing your clothes / All that I know is / I don't know how to be something you missed.

If there's one thing that Swift knows how to capture, it's the inevitable waves of nostalgia that come after a relationship ends — and she does it flawlessly once again in this tune (which is rumored to be about Joe Jonas).

Tonight I'm gonna dance / For all that we've been through / But I don't wanna dance / If I'm not dancing with you ... And I guess we fell apart in the usual way / And the story's got dust on every page / But sometimes I wonder how you think about it now / And I see your face in every crowd.

Who knew a breakup song could sound so happy? This driving tune centers around the struggle of trying to let someone go who you still care about.

Long were the nights when my days once revolved around you / Counting my footsteps, praying the floor won't fall through, again / My mother accused me of losing my mind, But I swore I was fine... I lived in your chess game / But you changed the rules every day.

It's no secret that Swift's relationship with John Mayer didn't exactly end well — and while he's been rumored to inspire a number of her hits, this one seems especially blatant given the title. Swift certainly pulls no punches with the lyrics, and if you've ever looked back on a relationship and realized that your ex was manipulative AF, you'll definitely relate.

“We Are Never Getting Back Together”

I'm really gonna miss you picking fights / And me, falling for it, screaming that I'm right / And you would hide away and find your peace of mind / With some indie record that's much cooler than mine.

I mean, has there ever been a more iconic breakup song for on-again, off-again relationships? When you've finally had enough of the endless drama, queueing up this song might give you the courage to call it quits for the final time.

More like this
17 Rihanna Songs To Listen To After A Breakup
By Candice Jalili
21 Taylor Swift Lyrics About Love & Sex That’ll Make You Swoon
By Caroline Colvin
Are Jennifer Lopez & Ben Affleck Getting Back Together? A Reported Reunion Has Fans Buzzing
By Cianna Garrison
Stay up to date