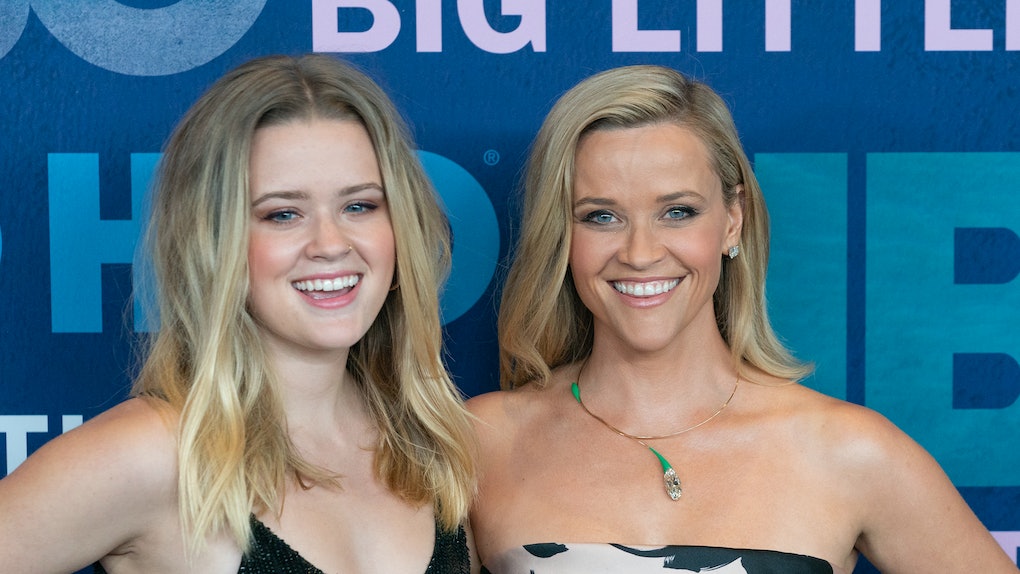 I find it stunning when children look like carbon copies of their parents, but when it's the child of a celeb who looks exactly like their famous parents, it boggles the mind even more. I mean, the hybrid mini version of a supermodel and a top movie star (you can fill in the blanks) is bound to make you stop and stare. That's why I can't get enough of these 14 celebrity kids and parents who look alike.

Whether a famous kid was born looking identical to their parents or grew into their features as they got older, there is no shortage of celeb children who are the spitting image of their moms and dads.

The best part about some of these parents and kids who look alike aren't just their facial features, but that the children look up to their 'rents so much, many even followed in their career footsteps. I could go on and on, but instead, let's jump into these photos of celebrity children who are, legit, their parents' clones.

Reese Witherspoon's daughter, Ava, favored her dad, Ryan Philippe's, looks for many years, but when she hit her teens, her uncanny resemblance to her mom started to shine through. The mother-daughter duo share the same coloring when it comes to their hair and eyes, so they really turn heads when they walk the red carpet together.

John Legend's son is the spitting image of his doting dad, and Teigen can't help but gush over her two favorite men's resemblance. "Hello baby john," she captioned a photo of the pair in September 2019.

Teigen and Legend's firstborn definitely takes after her mom. Not only does Luna look just like the Lip Sync Battle co-host, but she even has her mom's larger-than-life personality. Imagine what Luna could do with a Twitter account when she's old enough.

The "Mother's Daughter" songstress' smile is like a mirror image of her mom's.

Stormi is definitely her make-up mogul mom's mini-me. Whether she's dancing around with a Kylie Skin product in hand or dressing up as Jenner for Halloween, as soon as Stormi cracks a smile, you can't unsee the resemblance.

After Archie made his first appearance at a royal engagement in September 2019, fans couldn't help but compare his sweet baby face to old photos of Prince Harry. It's incredible how similar they look, from their orange hair to their big eyes and button noses!

Jay-Z and Beyoncé's eldest child didn't only inherit the rapper's strong features, because she's also following in his musical footsteps. The little girl even had her own freestyle rap titled “Blue's Freestyle/We Family" on Jay-Z's 4:44 album.

The Younger star's son, Luca, bares an uncanny resemblance to his mom, and his humor and personality resemble his mom's, too. Duff is known to gush over how kind, sweet, and smart the little guy is already. "Luca Cruz...the star of my heart. Makes me proud everyday. 7 better look out....he has arrived," Duff captioned a picture of Luca in March 2019.

It was unclear who the eldest child of Kardashian and Kanye West looked most like for the first few years, but the older she gets, the more North resembles her reality star mom.

Kevin and Danielle Jonas' oldest daughter is the spitting image of the "Cool" singer. The smile, the eyes, and the curly dark hair all resemble Kevin, and the daddy-daughter duo couldn't be more adorable.

Holmes' daughter got her mom's exact smile. The pair is known for spending quality time together in NYC and is often spotted out looking nearly identical.

The apple didn't fall far from the tree here when it comes to natural beauty — or talent. Just like her famous mom, Hudson started acting at a young age and has had a phenomenal career.

Eyes, ears, and noses... oh my! The actor's sons are both the spitting image of their father. If the Riverdale producers are ever looking to cast a young version of Hiram Lodge, Michael and Joaquin will have stiff competition for the role.

Gerber and Crawford could literally be mistaken for one another. Gerber, just like her mom, rocks the runway and is a model. It's hard to not do a double take when looking at these two when they grace the red carpet together.

More like this
These Songs About Loving Yourself Need To Be On Your Playlist
By Michele Mendez
The Best Movie Soundtracks Were So Good, They'll Live On Forever
By Brandy Robidoux
Maren Morris' Instagram About "Snap Back" Culture Slams Unrealistic Body Standards For New Moms
By Brandy Robidoux
Stay up to date