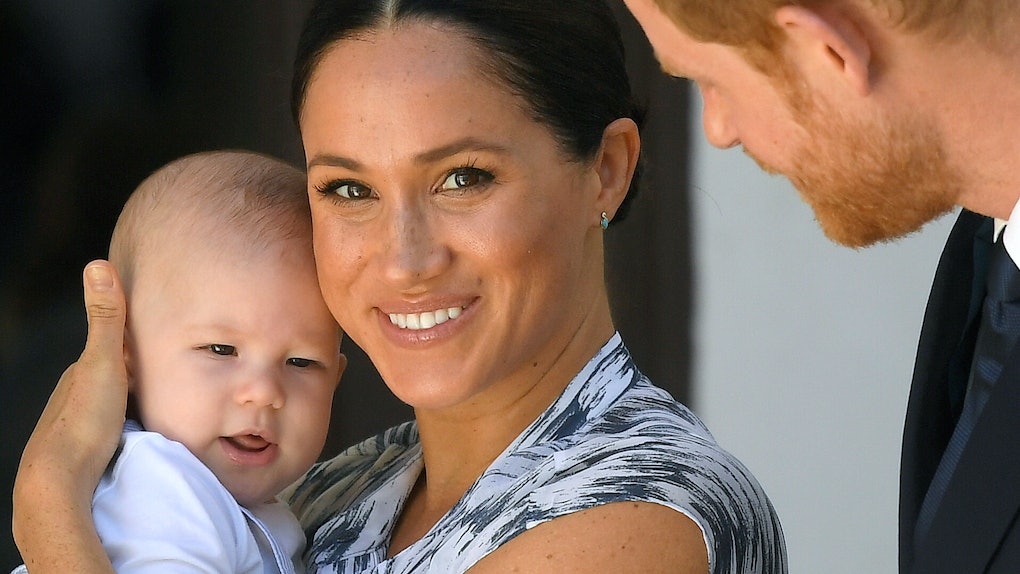 The Photos Of Archie's First Royal Engagement Are So Adorable

Oh, hiiiii Archie! It's the third official day of Prince Harry and Meghan Markle's royal tour in South Africa, and the couple surprised fans by bringing their almost 5-month-old son out for his first official royal engagement. The little guy was introduced to anti-apartheid activist Archbishop Desmond Tutu and his daughter Thandeka Tutu-Gxashe on Sept. 25, and you better brace yourselves, fam, because the photos of Archie's first royal engagement are seriously adorable.

Before the big meeting, the Duke and Duchess of Sussex shared several videos of Archie on the way to meet Archbishop Tutu — one of the world’s great champions of equality — on their Sussex Royal Instagram Story. In the clips, the sweet trio walked outside as Meghan carried Archie, who was dressed in powder blue overalls and matching booties. Whatta fashion plate!

In another vid, Harry put his arm around Meghan, and then leaned over to tell his son, "You get to meet Arch!"

Archie then started laughing, which made his parents laugh, and the whole thing is literally the cutest thing you'll see all day. Also, is it just me — or does little Arch look exactly like his handsome father?

According to People, the meeting went down at The Desmond and Leah Tutu Legacy Foundation in Cape Town, South Africa, which is described on its website as "an intellectual space for the development of human consciousness about the critical issues affecting the earth and its inhabitants."

During the meeting, the royal couple chatted with Archbishop Tutu and Thandeka, and Harry reportedly revealed that Archie is at the stage where he "constantly wants to stand."

"He’s an old soul!" Meghan explained, according to People.

"You like me, don’t you?" Thandeka then reportedly joked to Archie. "You like the ladies better, don’t you? He’s going to be a ladies’ man."

Gifts included a pair of framed photographs for Prince Harry of his mother Princess Diana’s meeting with Nelson Mandela in Cape Town in 1997; a set of signed children’s books for Archie written by the Archbishop; a children’s songbook containing the work of Patricia Schonstein, who opened a pre-school in Grahamstown in 1984 in defiance of apartheid rules; a copy of the Book of Joy signed by both His Holiness the Dalai Lama and the Archbishop; a set of portable and recyclable lap-desks from the Tutu Desk Campaign, and a matching pair of beaded bracelets handmade by members of Ikamva Labantu especially for the duke and duchess.

Honestly, I could look at these sweet photos all day and never tire of them.

Ditto for the videos the couple shared on their Insta Story, which y'all can check out below: