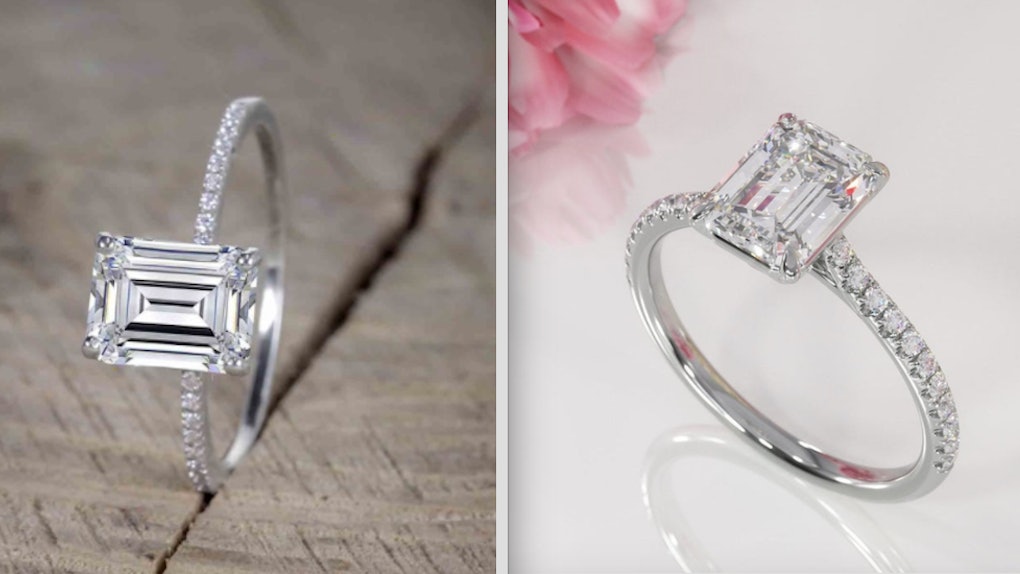 Via Walmart / ElizeJewellery on Etsy

12 Engagement Rings That Look Like Nicola Peltz's, But Are Way Cheaper

ICYMI, Brooklyn Beckham and Nicola Peltz are officially engaged — and not only were their corresponding Instagram announcements adorable AF, but the ring is a real head-turner, too. Don't just take my word for it — scope it out for yourself. Then, once you've managed to retrieve your jaw from the floor, you can peruse this list of engagement rings that look like Nicola Peltz's but are way cheaper and thank me later.

The sparkler in question can be seen in the sweet photo they both shared on IG, in which Beckham and Peltz look like literal heart-eye emojis while posing against the Cotswolds countryside. According to Kathryn Money, Brilliant Earth’s SVP of Merchandising & Retail, it appears to be a 4.5-5 carat emerald-cut diamond set on a delicate platinum or white gold diamond-encrusted band.

"The elegant simplicity of the ring’s design allows the gorgeous, show-stopping center diamond to be the focal point," Money tells Elite Daily.

That breathtaking beauty comes at a price, however. Money estimates that the ring cost between $125,000 and $200,000, depending on the quality and specific characteristics of the center gemstone.

Whether you know it or not, emerald-cut diamonds are right on trend. While this ring style is largely considered timeless, it's seen a major resurgence in popularity thanks to celebs like Jennifer Lopez, Beyoncé, Nikki Bella, and Jennifer Lawrence all wearing similar cuts. And it's no surprise that this style has been making a major comeback.

Looking for some similar engagement bling on a tight budget? These lookalike rings are just as fabulous as Peltz's — but a fraction of the cost.

While this is one of the more expensive rings on the list, there's a very good reason for the premium price: The center diamond is D color — the highest grade. D color indicates that the diamond appears colorless, even when viewed under magnification. Notably, it's also still a quarter of the estimates price of Peltz's rock.

Part of what makes Peltz's ring look extra glamorous is the band, which is studded with diamond accents. Even though the center diamond is a single carat, the pavé band on this 18K white gold band really adds to the wow factor of the engagement ring.

Want even more glitzy goodness? This ring not only has a gemstone-accented band, but also a halo of tiny stones encircling the center stone. Plus, it's remarkably affordable because the stones are moissanite — a popular alternative to diamonds.

This ring incorporates not one, but two major engagement ring trends: an emerald-cut stone, and a hidden halo. Hidden halos are huge right now (JoJo Fletcher is just one celeb who's embraced this style) in part because they have a certain element of surprise. While from above, it looks like a standard center diamond, viewing it from another angle reveals a glittering halo of diamonds all around the base. On top of the hidden halo, this ring also features pavé diamonds going 3/4 of the way around the tapered band.

The center emerald-cut stone on this ring may be moissanite — but the 14 small stones embedded in the white gold band are legit SI1-SI2 quality diamonds.

This show-stopping center stone on this ring is a 1-carat emerald-cut moissanite — yet the band is studded with .25-carat worth of real diamonds. You have options when it comes to the band, too — choose from 10K, 14K, or 18K gold in rose, white, or yellow.

A sleek platinum band accented by .25-carats worth of diamonds serves as the perfect frame for the center diamond on this eye-catching 1-carat rock.

Love emerald-cut rings but want a little more edge? Consider an east-west setting, which flips the stone on its side. This moissanite ring is the same size as a 1.75 carat diamond and shines in a sleek, low-profile setting.This band is available in yellow, rose, and white gold.

This 1-carat center diamond boasts a VS1 clarity grade, which means it has no visible inclusions whatsoever to the naked eye. And with all the pavé diamonds on the white gold band included, the total weight of this stunner is 1.29 carats.

When Bigger Is Better

This beauty has garnered over a hundred five-star reviews from Etsy shoppers, and it's not hard to see why. The emerald-cut center moissanite dazzles just as spectacularly as a diamond — and the 2-carat weight doesn't hurt, either. This one's also available in a platinum band for a slightly higher price tag ($1,282.56).

Sparkle doesn't have to break the bank. This $60 cubic zirconia ring features a classic solitaire stone with a sprinkling of pavé stones on the band and a light-catching halo.

More like this
Is Katie Thurston Engaged After 'The Bachelorette'? Her Instagram Is Sus
By Joyann Jeffrey
Shanna Moakler's Relationship History Goes Beyond Travis Barker
By Corinne Sullivan
Matt James' Quote About His 'Bachelor' Fantasy Suite Dates Is Revealing
By Corinne Sullivan
Stay up to date