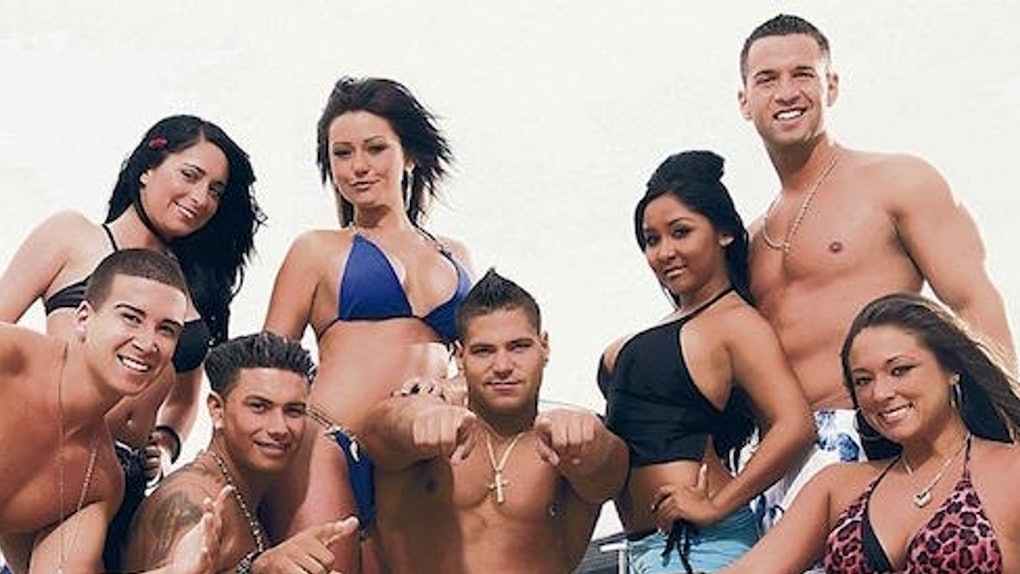 MTV's reality hit Jersey Shore had its original series finale in 2012, but did it ever really go away? The TV show infiltrated the pop culture landscape in 2008 (remember all those Snooki Halloween costumes?) spawning a new breed of unescapable slang that America just can't stop repeating all these years later. Jersey Shore quotes are a part of this world forever, whether you like it or not.

If you think the days of "T-shirt time" and "meatball power" are over, think again. Reboots and reunions are par for the course in entertainment these days, so it's only natural for an iconic reality show like Jersey Shore to get another shot. Jersey Shore Family Vacation premiered on MTV on April 5, and reassembled most of the cast who went on to become household (nick)names as a result of the show's success. Yup — Snooki, JWoww, Deena, The Situation, Pauly D, Vinny, and Ronnie are bringing their talents to South Beach, Miami, for more on-camera shenanigans. These people were once considered the Avengers of partying, so of course fans want to resurrect some of that fist-pumping glory in 2018.

Nowadays, some of the original Shore members have their own families and significant others at home — but what's a little fun in the summer sun for old time's sake?

Ah, we can smell the Ron Ron juice already. Is it possible to develop a secondhand hangover just by watching this trailer?

If you need to brush up on the intricate language of the Jersey Shore, now is as good a time as any. Here are the quotes that the cast blessed us with — may you continue to use them in your every day lives accordingly.

1. "You Stalk My Whole Entire Life"

Saying someone won't leave you alone is just not enough. Pauly took the word "stalking" and elevated it to a Jersey-fied next level. "Stalking my whole" life really hammers the point home, don't you think?

Ah, this classic memory of frazzled drunken Snooki trying to find the beach when it was right next to her. This quote doesn't have to be used in a situation where you literally can't find a beach — I think it applies to any moment where one is just confused beyond repair.

T-Shirt Time is a special time. It embodies the naive enthusiasm before a night out. That hour where you're getting ready, excitement is building, and anything can happen.

Honorable mention: "The T-Shirt Before the T-Shirt," which is pretty self-explanatory.

It's not a quote, but this significant action deserves recognition in the canon of quotes. It's the physical embodiment of the Jersey Shore lifestyle.

No, this is not a reference to a Bruno Mars song. A "grenade" is an undesirable person one avoids at the club. Hey — they made it up, not us!

In the late aughts, this ubiquitous routine abbreviation was on the mouths and tank tops of Jersey Shore viewers everywhere, and everyone and their grandma learned what it meant.

Who has that much laundry to do all the time, honestly? Whatever.

No caption necessary. This is more than a quote. It's a state of mind.

An official call that the night was underway. The dinner bell of pre-gaming.

Feel free to use this in a sentence when you want someone to end whatever it is that's annoying you. They don't even have to be named Ron. If they're cool, they'll know what you're talking about.

I don't condone this idea, but maybe Deena should take the concept up with Shark Tank.

Ready to get your fist-pump on again? Jersey Shore Family Vacation airs at 8 p.m., Thursday, April 5, on MTV.