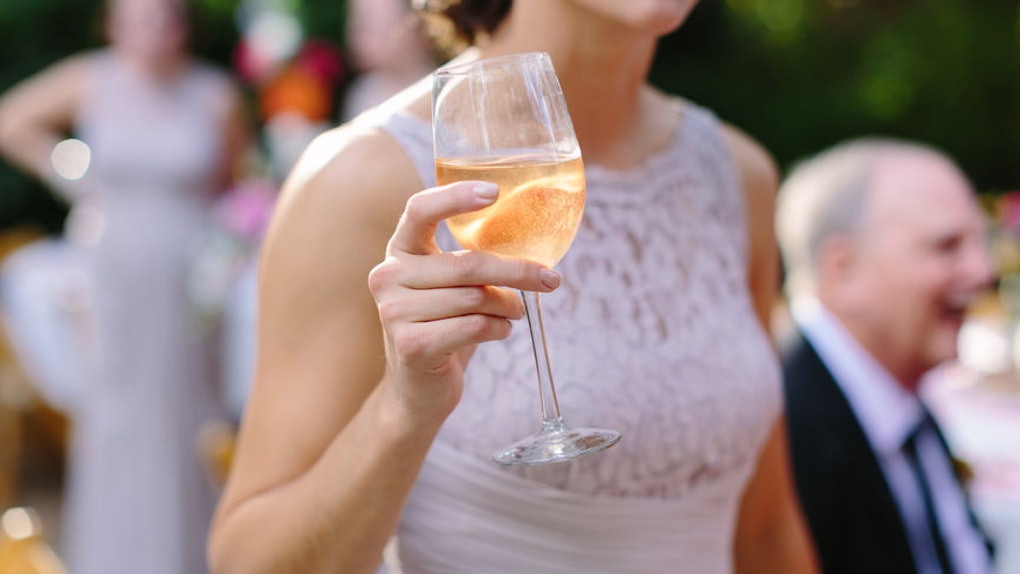 10 Wedding Speech Horror Stories That Will Leave You Speechless

What makes a good wedding speech? Most would agree it’s short and sweet, and packed with personal details about the couple's unique bond, heartfelt wishes for the journey ahead of them, and perhaps even a touch of humor for some levity. If only they could all follow that basic formula, right? But there are so many ways a wedding speech can go south. I should know, after peeling through more than 100 wedding speech horror stories on Reddit.

I’ve also been a real-life witness to the potential for disaster when it comes to these speeches. As maid of honor at my best friend’s wedding last September, I gave a super sincere speech about how the bride and groom met, and how I played a role in their relationship early on. I peppered it with warm and fuzzy deets about the couple and a few inside jokes about Chicago pizza for good measure (you had to be there). After I passed the mic to the best man, he rattled on about the groom’s most humiliating tales from adolescence for about 25 minutes. “Did I do it wrong?” I asked my boyfriend. “No, everyone loved it,” he said. "Ragging on the groom is just par for the course in a best man’s speech.” The look on the bride’s face said it all: woof. Apparently, there’s a very good reason that nearly half of all brides fear the best man’s speech, according to Komo News.

To be clear, a bad wedding speech can be delivered by a bridesmaid, the mother of the groom, or even grandma. It can be totally harmless, such as when the speaker's nerves get the best of them, or they ramble on a tad too long. Warning: That is not what these cringe-worthy stories are about. These are the kind of wedding speeches that leave you, well, speechless.

For years my uncle was with the same woman. We will call her Sally (I honestly can’t remember her name). They never got married but they had a kid together. Must have been together over a decade. Then they split, he met a woman in his field and they fell in love. When they decided to get married my uncle made my dad his best man. My dad and uncle weren’t super close. I was fairly close with my uncle because he lived at grandpa's house and I spent a lot of time there after school, but they easily had a 15 year age difference so weren’t super close.

Anyway, on the day of the wedding, dad got drunk and during his speech referred to my uncle's bride as Sally. There was an audible “oooooh” from the crowd and several facepalms.

I think the worst I witnessed was after the best man's speech. So what happened was the best man made this great funny tongue in cheek speech about how the bride was too good for the groom and how he would trade places with the groom in a heartbeat. Because of their relationship, the speech worked, and he took little jabs at all three of them.

Then the father of the groom stands up and makes his speech — which was along the same lines of "if I could date the bride I would, hey buddy enjoy tonight wink wink". That's when I realized some things a best friend can say that an old man can not and dad didn't "get it.” Seriously, his speech sounded predatory as f*ck… The room went dead until someone yelled out "cake!"

Lots of references to the couple's future children — bride was infertile and the couple didn't want to have kids anyway.

The best man spoke about how the groomsman was a womanizer and an ignorant douche. He was going to turn the story into how the bride changed him, but the mic malfunctioned and it ended up being a roast instead of a toast.

Keep in mind that the room was filled with mostly old people, who didn't really agree with my brother and sister-in-law having lived together for a couple of years before they were married. My opening line for my brother's wedding was, "Fornication," and then I paused. "Oh, that can't be right. Looks down at notecard. Oh, I see what I did. For an occasion such as this...."

Blame It On The Alcohol

The Maid of Honor was super drunk.

She said something along the lines of "When I see Kevin looking into Stacy's eyes I just know it’s true love.”

Problem is, the groom’s name is Kyle. Kevin is the best man, and also Stacy's ex who she cheated on with Kyle, whom she was now marrying because Kyle knocked her up. Things got quiet and awkward amongst those who knew this backstory.

My good friend's dad told the story of her birth... in graphic detail. Everyone was uncomfortable and it went on for a long time.

I've seen some stuff in my day but I think the best was at an old childhood friend's wedding. The bride's sister was the maid of honor and her speech starts out okay enough about growing up and being glad to see her sister marrying and starting a new life and all that jazz. However, it slowly descends into a rant about how she can't find anybody and is jealous she's going to be alone forever and what you will. It just gets really awkward and she's full-on blubbering crying while ranting.

So how does she top this masterpiece? She sings a song. Off-key and still crying.

My cousin did the wedding speech from The Princess Bride at his brother's (my other cousin) wedding. ("Mawidge...") No one over 40 got the joke. My mother leaned over to me with a concerned look and whispered, "My god, I think Michael is having a stroke and doesn't realize it." It fell flat in an embarrassing cataclysm of awfulness.

So at my wedding — "shotgun wedding" — my best man and best friend starts his speech, telling a story from when we were teens. Everyone is listening intently, but about three minutes in, I start shaking my head. So, I interject, "Dude! That's not me..." he stops, leans in, and responds quietly "huh?" Then I said, "Duuuude, that's a story about you and another friend., not about you and me" He stuttered out "Um" a few times, then lifted his glass, looked around the room and said, "TO THE BABY!" Then everyone clinked their glasses and repeated, "TO THE BABY!"

Moral of the story is, you pretty much never know what you’re going to get with wedding speeches. Ideally, some of the speakers will have given their toasts some thought — and resisted over indulging in the open bar. Unfortunately, the unpredictability factor means you’ll also get a few wild cards that make inappropriate jokes or call one of the newlyweds by the wrong name. If it’s your wedding, the best thing you can do is try to keep your sense of humor — and if you’re the one giving the speech, heed Owen Wilson’s wise advice to Rachel McAdams in the legendary rom-com Wedding Crashers: Rather than trying to make them laugh, hit them in the feels.