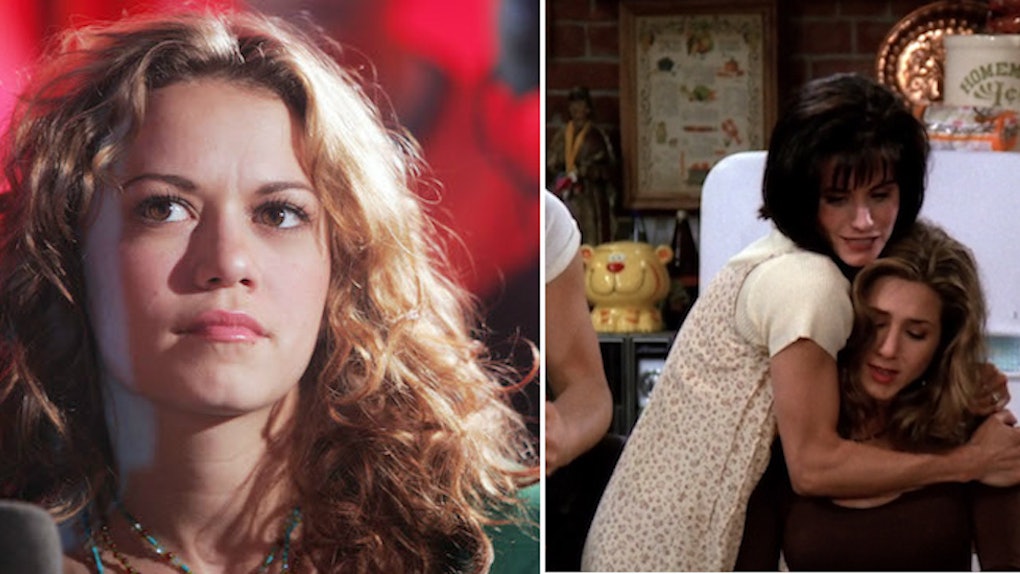 'Tis the season to snuggle up in an oversized sweater on your couch and watch your favorite television shows. Naturally, there are a few cups of hot apple cider, a cozy blanket, and some fuzzy socks in the mix. Every once in a while your pup comes to cuddle with you, or your roommate sees that you're watching the most hilarious episode of that sitcom you've seen a million times and snags a seat. Just thinking about the whole experience makes you want to leave work or class a little early. (Don't do that, though.) The best TV series to rewatch in the fall will be there as soon as you get home, and likely make you feel nostalgic AF. *Cue the happy tears, laughs, and prep those snacks.*

What's the greatest television show of all time? That's a loaded question, I know. And almost everyone will have their own, very strong, opinion. Some of us would say that the most hilarious Michael Scott moments or Jim Halpert pranks from The Office take the cake. Others would probably consider those scenes a "moo" point, while raving about Joey from Friends and digging into two 'zas.

There are the dramatic moments from One Tree Hill that left fans on the edge of their seats, and more recent shows like Insecure, Girls, and Game of Thrones that deserve the spotlight. It's a tough decision. So, just stick to rewatching these 10 shows, for now — and taking a walk down nostalgia lane.

Let's be honest: At one point or another, you wanted to live in Stars Hollow. When you watched this show, you were obsessed with the fake Connecticut town and wanted to be Rory Gilmore. You loved her close relationship with her mom, Lorelai, and their cute dates at the local diner. Did you apply to Harvard, too?

This fall, you should rewatch this show for all the moments you might have missed the first time around. You may end up feeling differently about all the relationships and drama, or be firm in your stance that the revival series is not quite as good as the original. (Let's discuss when you're done.)

Friendships, love, and rivalries — oh my! Some of us grew up watching One Tree Hill, and others discovered the world of Nathan Scott in college. (Guilty.) You sat on the edge of your couch with your roommates and gasped over the latest drama. Episode after episode, you found yourself falling in love with the characters and the story even more.

The show's most tear-jerking or sentimental moments are worth rewatching, because they constantly remind you to hug your friends a little tighter and not let a second of life go by.

It's just like the quote from the finale episode goes: "It’s the oldest story in the world. One day you’re seventeen and planning for someday. And then quietly and without you ever really noticing, someday is today. And that someday is yesterday. And this is your life." Can somebody pass the tissues now, please?

Your best friends are always there for you — but so are your favorite characters from arguably one of the most popular TV shows of all time. That's right: The entire gang is going to give you a laugh no matter how many times you've seen those episodes.

You don't quite remember the day you started watching Friends. It was just always on Nickelodeon, late at night when you couldn't sleep. Suddenly, you wanted a purple apartment in the city and to drink coffee out of huge mugs with your best friends. (Girl, same.)

This time of the year, you love watching the gang play football in the park on Thanksgiving Day. Chandler makes some sarcastic comment about the trophy, and Phoebe is just there to have fun. Spoiler alert: Who knew Rachel would score the game-winning touchdown?

The spookiest season of the year calls for rewatching those Halloween episodes of The Office (including the deleted cold open scenes and other secrets from the show.) Dwight's pumpkin head, Pam's kangaroo costume, and the monologue from Robert California that spooks the entire gang will never get old. And don't even get me started on the hilarious pranks and jokes that you could pull off at your own party.

There was the original prank — A.K.A. the stapler in the Jell-O — and the time when Jim dressed up as Dwight, mustard shirt and all. Honestly, just start at the beginning and go through the entire series again. You won't regret it, and may get some costume ideas, too.

Do you know every single word to the Fresh Prince of Bel-Air theme song? Any true fan probably sings it in the shower and remembers Will Smith's character getting into all sorts of trouble on the reg. This fall, move back into that Bel-Air mansion for a walk down nostalgia lane. It's like "Throwback Thursday," but for an entire season of the year.

Just like those episodes of Friends, George Lopez, and Everybody Hates Chris, you tuned into this show late at night on Nickelodeon while eating snacks on your couch. Nowadays, you just want to take some fashion advice from that generation, and tell every other show, "Smell ya later!"

Hanging out has never looked so good. Seriously, the characters of That '70s Show basically invented the concept of getting together with your best friends in someone's basement. (Although, you could do without that wallpaper in the kitchen and Red Forman's catchphrase in your own life.)

Back in the day, you rooted for relationships like Eric and Donna or Jackie and Kelso. You got on board with the flannel trend thanks to Hyde, and related to "Kitty" Forman all too well. You could look at a bunch of memes that have been made over the years, or watch the show from the first episode. (The decision seems pretty obvious to me.)

Fall is the season for football games. Maybe you and you best friends still go to the games at your high school. Sometimes, you snag a seat at a big stadium to watch your favorite national team play a game, too. You just love the spirit and atmosphere of sports, and that's why you were so emotionally-invested in Friday Night Lights.

This drama series followed the lives and drama of football players from a small town in Texas. They dealt with relationships, injuries, and life-altering events that made you want to jump through the screen and give your favorite characters a hug. That chant has been missing from your life, and it's time you said it loud and clear: "Clear eyes, full hearts, can't lose!"

When you think of Halloween, what two colors come to mind? That's right: Orange and black. (If that's not a sign from the universe to start this show all over again, then I don't know what is.) The Netflix original series started in 2013, so rewatching your favorite episodes won't be as nostalgic as you may like. But, checking in with Crazy Eyes and Piper is still a good idea.

This time of the year, you just want to be spooked and sitting on the edge of your seat. Sure, you could watch horror movies or the slightly newer shows that make you question the world. Orange Is the New Black won't disappoint, though.

Can we talk about Sabrina the Teenage Witch? Hopefully you didn't forget about this show and all its glory. Back in the day, you hoped and dreamed that you would get powers like Sabrina. You wanted to point your finger and make pancakes in a second, or at least have a hilarious cat by your side. (Shoutout to Salem, the true star of the show — in my personal opinion.)

But, that didn't happen, and you're not totally surprised. Some of us just aren't born with magical skills and wands. Although, Selena Gomez inWizards of Waverly Place had the ability to wear funky hats and clean up all those spilled trays. Universe, what gives! OK, take a deep breath, and then put this classic back on.

Last but not least, is the Netflix original series that had you craving waffles for weeks: Stranger Things. When it comes to nostalgia, this show is the perfect fit. With a soundtrack and plot line that's based in the '80s, it's easy to feel like you're traveling back in time.

You watch "Dad Steve" rock his bomber jackets, and Nancy go to school with super curly hair and turtleneck sweaters. (Other than the whole "monster in the sky trying to take over the world" thing, it would be pretty cool to live in Hawkins.)

Especially when you and your friends are in the mood to watch something spooky, this show is everything you're looking for. Eleven makes you feel like anything is possible, and the kids make you want to break out Ghostbusters and watch that next. Actually, can we?