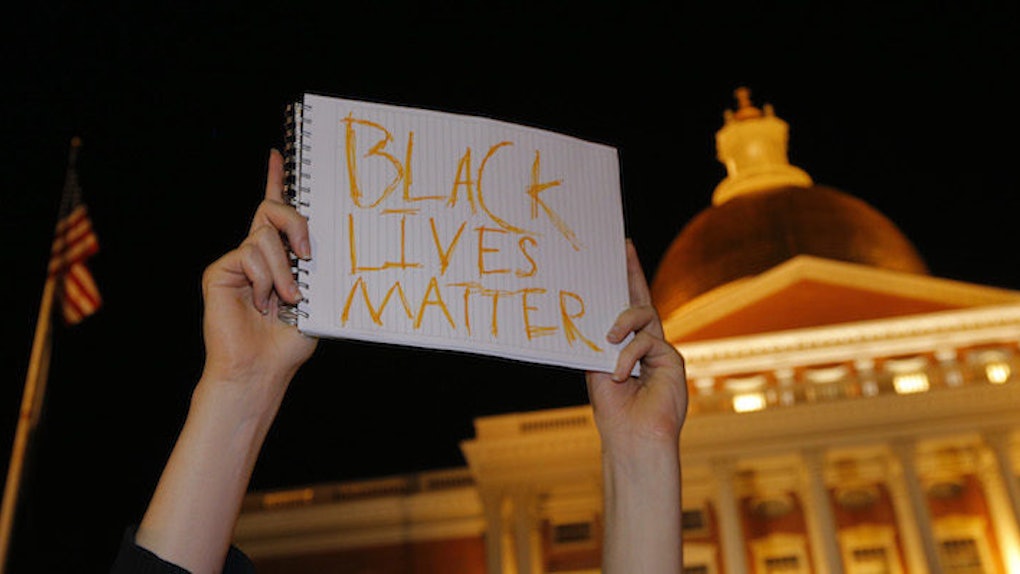 You're probably familiar with the saying, "The first step to solving a problem is admitting you have one."

Well, here it goes: America is a racist country.

It's simply an acknowledgement of this country's history, as well as its continued impact on the present.

Simply put, racism pervades our society. It's ingrained in our nation's narrative.

Many of this country's founders were slaveowners.

We inhabit a land that was violently taken from indigenous peoples and cultivated by human beings who were robbed of their freedom, tortured, raped and lynched.

Our Constitution originally designated black people as three-fifths of a person. Roughly half a century ago, racial segregation was enforced in a majority of states in this country.

We currently have a member of Congress, Rep. John Lewis, who was brutally beaten and arrested simply for peacefully requesting equal rights.

A woman who is the daughter of a slave voted in the presidential election this year. Indeed, we are not that far removed from the darkest chapters of our past, and we have not escaped the legacies of slavery and Jim Crow.

You only need to look at the disproportionate impact America's criminal justice system has on minorities in the present day to recognize this.

So, I repeat myself: America is a racist country.

Some of you might be sitting there and thinking, "Here we go again: another dumb liberal with white guilt."

No, I don't have white guilt. I'm simply working toward white awareness.

I will never truly understand what it means to experience systemic racism, given that I'm part of the group that has reaped its benefits from the earliest days of this country... and continues to do so.

But I do think I have an obligation as an American, human being and especially as a white male to combat racism and try to help this country move forward.

White men need to wake up.

At the moment, many white people are either unaware, unwilling or unmoved by the facts.

A recent Pew Research Survey showed 61 percent of black people believe race relations in the US are generally bad. Meanwhile, only around 45 percent of white people express the same belief.

It's not a coincidence that the historic perpetrators of racism do not think it's much of a problem anymore. But the historically oppressed still see it as a major issue.

White men, in particular, need to step up and speak out about racism, especially in the wake of such a divisive and racially-charged election cycle.

To be clear, I am not saying people of color need white saviors. This is about what is right AND what is practical.

Many people have been calling for the country to unify, now that we've elected Trump.

But it's unfair to ask groups that have been targeted by the president-elect's rhetoric – and in some cases by his supporters – to step forward and lead the charge against racism.

White people just overwhelmingly voted for a presidential candidate who describes Mexican immigrants as rapists, paints Muslims as terrorists and portrays black people as a downtrodden community, incapable of pulling themselves from the depressing dystopian world they apparently inhabit.

What are Trump's solutions to these supposed problems?

He ignores the rise in hate crimes post-election, but writes angry tweets about the cast of "Hamilton."

And yes, a majority of white people signed up for this... including 53 percent of white women.

Even white Millennials favored Trump over Clinton (48 percent to 43 percent).

Long story short, white people are the group most responsible for this mess. So, they're going to have to step up and clean it up. This is especially the case for white men.

Here's how I plan to use my white male privilege to take a stand against racism (which we'd be dealing with even if Trump hadn't won).

One of the most common themes among white liberals after the election was utter shock. They seemed to be asking, "Is America really this hateful?"

The simple but painful answer is YES.

Dave Chappelle did a fantastic segment on this recently, when he hosted "Saturday Night Live."

It revealed a very important truth: It's not just white conservatives who are in denial about the scale and scope of racism in America. White liberals are guilty of this, too.

White people, especially white males, need to listen to people of color when they say they've been subjected to hate. Our first instinct cannot be to dismiss them, or argue they're just being hyperbolic or dramatic.

Just because you've never experienced racism in your life, that doesn't mean it doesn't exist.

We cannot sit idly by and pretend this country isn't infected by hate.

We cannot cover our ears because we don't like what we're hearing.

Ignorance is not bliss.

2. I will use my privilege to have the tough conversations.

White privilege does not mean white people are automatically guaranteed success in this world.

But it does mean white people, in general, do not face as many obstacles as people of color. They are given the benefit of the doubt in most situations.

This is especially true for white males.

White men enjoy a greater level of social and economic mobility, as compared to any other group. I plan to use this privilege to have the tough conversations on incendiary topics like racism.

Dialogue is not the only way to combat racism, but it is an important aspect of breaking down regressive perspectives.

Research shows that simple conversations can help thwart racial bias, but calling someone "racist" does not aid in this process.

With that said, it's pretty hard to ask someone who is being subjected to racism to just take the abuse, and not call it out for what it is.

This is precisely why white men are in a strong position to have these conversations: We are not being directly targeted by Trump's rhetoric in the same way other groups are, and we are not experiencing hatred on a scale anywhere close to that of minorities.

We never have in this country.

We will not have to endure as much abuse for stepping forward and trying to converse with people who arguably harbor prejudiced views of the world.

We are in the safest position to have these tough conversations.

With that said, we also shouldn't paint minorities as a desperate group in need of our assistance. This is not what being an anti-racist ally means.

We can't speak on behalf of people of color, or presume we understand what it means to be a part of a marginalized group. But we can use our words to stand in solidarity with them.

3. I will not normalize hate.

In having these tough conversations about racism, it's important we avoid normalizing hatred.

Yes, as noted above, calling someone "racist" is not necessarily the best way to get through to him or her.

But that does not mean we should avoid challenging white supremacy when we encounter it.

When a group of people who call themselves the "alt-right" celebrate Donald Trump's victory with Nazi salutes in Washington DC, we should not play by their rules.

In short, they are not the "alt-right," as they would like to be called: They are neo-Nazis.

We can still engage with these people, but it's imperative we challenge their backward and hateful worldview.

And when our president-elect appoints people to his cabinet who've said and done racist things, we must step forward and tell it like it is. After all, that's largely what Trump campaigned on: an end to "political correctness."

We can't be afraid to hurt people's feelings.

This is not to say we should deliberately hurl insults. But attempting to describe blatant hatred in gentler terms is really no different than sitting in complete silence and pretending it's not happening.

Progress is not easy. It's a bit like going through puberty: often very painful and awkward.

The important thing is that we don't allow ourselves to get discouraged. This is no time to sit on the sidelines.

I am not delusional enough to believe I can eradicate racism from American society by myself. I also don't believe white men will accomplish it by themselves.

But now, more than ever, white males desperately need to come to terms with this country's past and present.

In the process, we will hopefully find a way to strive toward building a better future.