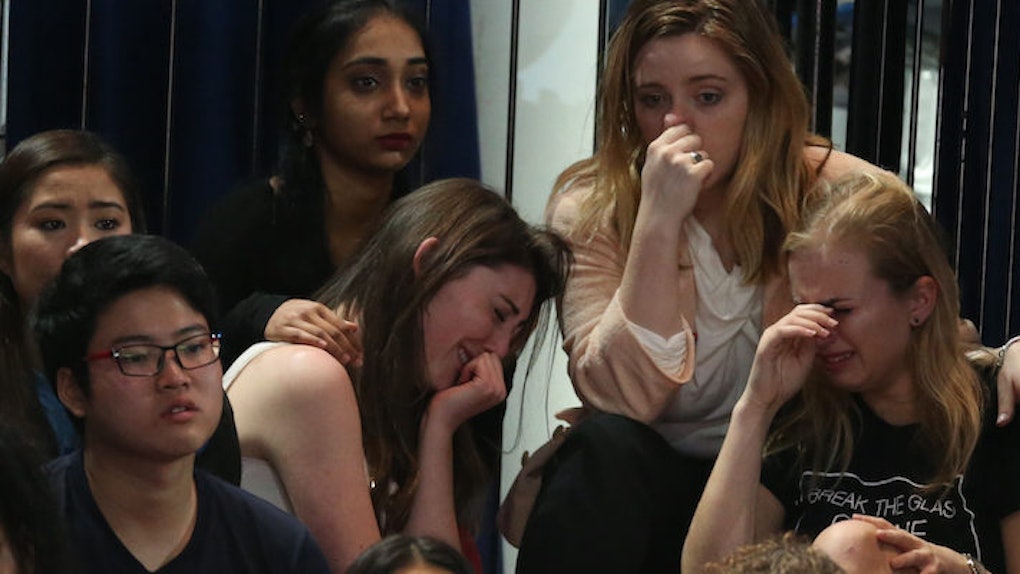 What I'll Tell My Daughter About 2016 Election Results

A few weeks ago, I penned a letter to my future children about the 2016 election and how, with my vote for Hillary Rodham Clinton, I was voting for their future.

I thought, one day in the next decade, I would pull out that letter and speak of values like tolerance, freedom, equality, justice and love.

I thought, when I pulled out that letter, I would tell my children of victory and shattering glass ceilings.

I thought, when I pulled out that letter, Hillary Clinton would be the 45th president of the United States of America.

But now, when I pull out that letter, my story of the 2016 presidential election will end with defeat.

When I finally turned off the news and went to sleep in the early morning hours of November 9, I was terrified. The last time I felt fear this deep, I was 9 years old and the Twin Towers had just fallen.

As a white, middle-class, Jewish, college-educated woman, I'm not sure there has ever been a time I've felt personally threatened by a politician or political agenda.

But on November 9, I woke up scared of the world we will live in, scared for my future, my body, my health and my rights.

The last time I felt fear this deep, I was 9 years old and the twin towers had just fallen.

I didn't only wake up scared for myself, but also for my friends and neighbors, for the millions of people I pass on the street each day, for those who surely woke up to thoughts of a more terrifying future than I did.

It's difficult to come to grips with this reality, to walk through a blue city, in a blue state, at a time when the country turned a terrifying shade of red.

It's hard to walk down the streets of New York City on Donald Trump's first morning as president-elect, and look at the faces (mine included) of those he has offended, marginalized and vilified over the last 18 months.

It's hard to reconcile how a country born out of the need for freedom and acceptance, a nation built by immigrants and those who believed in a better tomorrow, could elect someone whose words and actions go against every fiber of that being.

We said we would make history, and today, it's impossible not to think of history. On the day I casted my vote for Hillary Clinton, I remembered those who had come — and fought — before me.

On the day I casted my vote for Hillary Clinton, I remembered those who had come — and fought — before me.

As I dressed in white that morning, I thought of those who had dedicated their lives to the suffrage movement and of a generation born before the 19th Amendment, some of whom lived to fill in the bubble for our first female president.

Even more than them, I thought of my deceased grandparents and wished more than anything I could call them and proudly exclaim I had voted to make history.

But when the election results came in, I was almost happy they didn't live to see this day. They did not have to wake up in a world where their once-immigrant families may not be welcome.

As my mind circles the countless thoughts swirling in my head and all over the internet, I keep landing on this question: Now what? What does tomorrow (figuratively and literally) look like?

Now, we mourn. Today, we cry. Today, we feel. We look with hope at what could have been, what almost was.

And then, tomorrow, we recover. We fight back. We don't leave our country or abandon our people. We get ready for the next two years, and the next four.

We ensure this president will be simply that: one president, one person. Our country is built on so much more than that.

Yes, one person can change the world, but if we all come together, we can have an even greater impact.

Tomorrow, we hold faith in our political system and our democracy. Tomorrow, we get ready to fight like hell for 2020.

When my daughter asks where I was in 2016, I'll tell her I was With Her. I'll still speak of this election and Hillary Clinton's campaign with immense pride.

I'll tell her how Hillary Clinton inspired me in a way I didn't know was possible, and how in the months and days surrounding this election, I seriously questioned my career choice and my future.

But I'll also speak of the reality. I'll tell her of the fear and pain I felt when I woke up on November 9, 2016. I'll recount the text I received from my mother telling me she was concerned for our future and women's health.

I'll remember the tears I shed as I listened to Hillary Clinton recite what may have been the most important words of her political career:

I know we have still not shattered that highest and hardest glass ceiling, but someday, someone will, and hopefully sooner than we might think right now.

And to all the little girls who are watching this, never doubt that you are valuable and powerful and deserving of every chance and opportunity in the world to pursue and to achieve your own dreams.

When my daughter asks where I was in 2016, I will tell her that one man couldn't break our spirit, and one man was not going to stop me from fighting for her future.