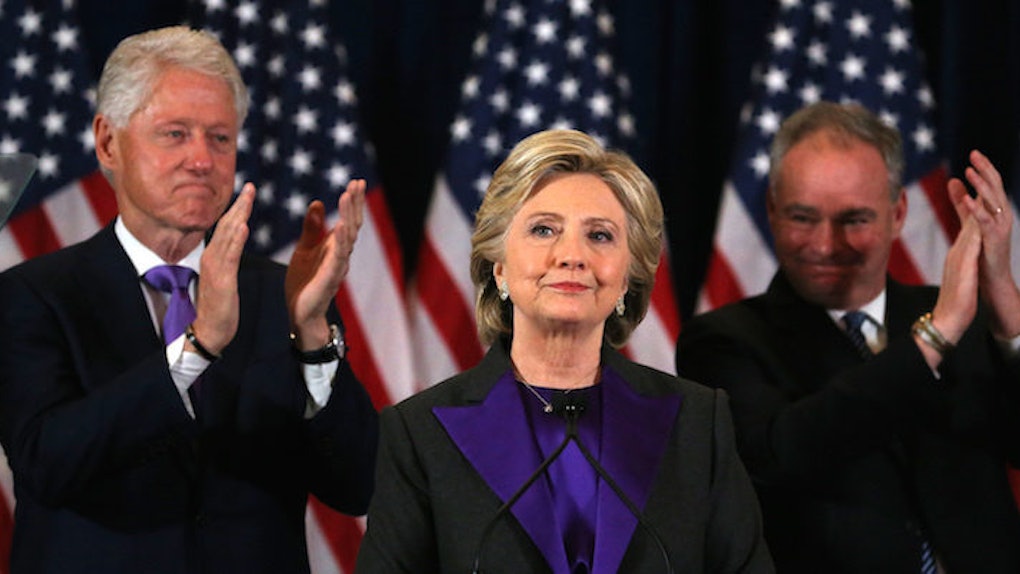 People around the country are writing thank you notes to Hillary Clinton. They can be sent to this address:

Thank you for serving as a role model for the entire 24 years of my life and your national public service.

This is actually the second letter I'm writing to you. The first was in 1998, when you were first lady.

I was 6 years old, and you were the only first lady I knew. As the country's highest figure for what a woman should be, you were a magnificent inspiration.

I was 8 years old in New Jersey when you ran for New York's Senate seat.

I was too young to understand the significance of it -- you were running to become New York's first female senator.

I was too young to see the attacks people were already building against you, that they would continue to use for years.

All I saw was that a woman was going to become a senator. You made that seem like a normal thing. Why shouldn't a woman be senator?

When you started your first campaign for president, I was 15 years old and starting to pay more serious attention to politics.

I wasn't sure about you as a candidate, but I waited in line for hours when you gave a speech at my high school.

Of course, I knew it was important that you were a woman running for the Democratic nomination, but I didn't realize how rare that was.

You made me think it was a totally usual thing for a woman to run for president.

I was disappointed when you lost the primary, but buoyed by Barack Obama. Still, I teared up when you talked about those 18 million cracks in the glass ceiling.

I was 16 years old when I went to the Democratic National Convention in Denver, Colorado.

The grace with which you nominated Obama for the position you had just been trying so hard to get gave me shivers.

I remembering staring at the "New York" section in the arena, wondering at the self-possession and power it took for you to do that with a smile.

I felt that same admiration when Obama appointed you secretary of state.

Throughout college, I was repeatedly impressed as you traveled around the world and made it a point to advocate for the rights of women.

Like so many others, I was fascinated by the photo of the crowd watching the Osama bin Laden raid from the White House Situation Room.

I was 19 years old and studying economics, learning about gender inequalities, and as I studied the photo, I was struck by the fact that you were one of two women in the crowded room.

In the mix of emotions that day, there was anger: Why were there only two women? And then, that admiration again: She's got a seat at the table.

I was 23 years old when you started running for president again, and I accepted a job covering politics.

I was so excited to be front row to a historic year.

During the primaries, I saw you in Iowa and New Hampshire and New York. I made it a point to see you as much as possible.

I collected press badges and photos and posters and buttons. I wanted to show them to my daughter one day.

As the election went on, my admiration for you grew. You were smart, poised, your policies were well thought out and made sense. You were sweet to your fans after rallies.

I interviewed people on your campaign, and they all told me how much care you had -- even remembering the name of a teen volunteer in New Hampshire.

I was 24 years old at the Democratic National Convention in Philadelphia when you became the first woman to accept a major party's presidential nomination.

I was flying that night walking out of the arena, realizing how big of a step it was for women, thinking about all the girls who would grow up seeing a female nominee as a normality.

You campaigned on values of "love and kindness" while going up against a misogynistic demagogue who thrived on hate and incited violence.

You didn't flinch when he interrupted to call you a "nasty woman."

I recognized myself in your patient smile at the debates -- that smile all women make when a man interrupts and rants and thinks it's OK to do so.

You stood strong as he attacked your family, bringing up the darkest moments of your life. You forged through months of being called a "bitch" and a "cunt" and "shrill" and "without stamina."

You kept going. You showed me how to keep going.

Mine was to be in the room with you when you were elected president.

It was both a professional and a personal goal. I worked hard all year, following this madness around the country, buoyed by my belief in you, by the strength I saw you carry.

I managed to get inside the Javits Center, where you were having your Election Night event on Tuesday. I was so happy -- we were so close to achieving our goals.

And then the poll results started coming in.

I feel betrayed by a country that endorsed a man who sees me as an object, who allows for casual assault and serious hate.

On Wednesday morning, despondent, I turned again to you to give me the hope to keep going.

I could barely see the computer screen through tears as I transcribed your concession speech:

Never doubt that you are valuable and powerful and deserving of every chance and opportunity in the world to pursue and achieve your own dreams.

For 24 years, you have been reminding me with your intelligence, your perseverance, your poise, your love and kindness that I am valuable and powerful and deserving of every chance to pursue my dreams.

We didn't win this time. But you made me think it's possible.