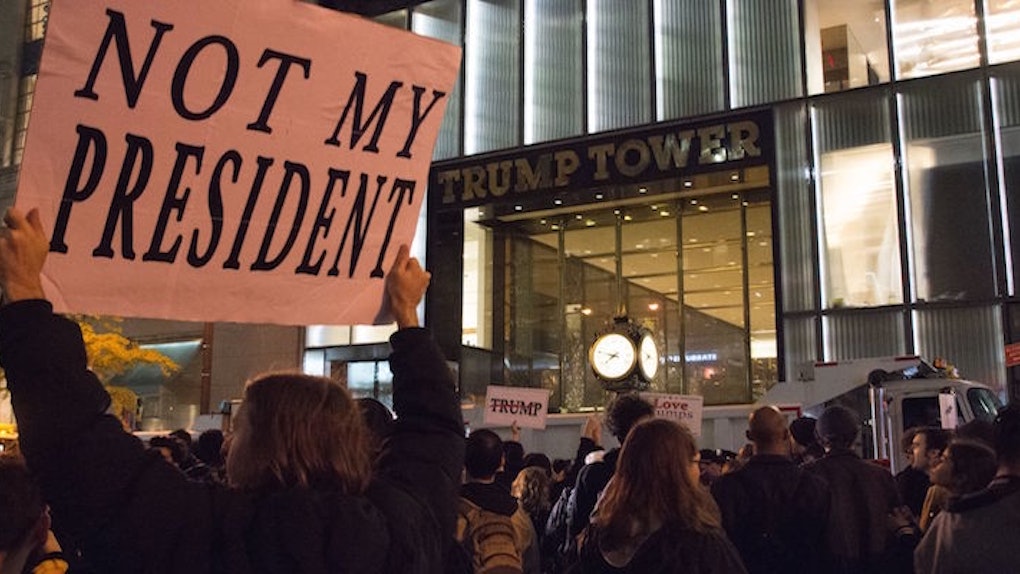 We'll Heal When We Realize We Live In Two Americas

The emotional backlash that came as a result of Trump's win is more than warranted.

Half of the country just voted for a man who said he'd take away the rights of women, Muslims, Mexicans, blacks and members of the LGBTQ+ community.

As a feminist and activist who fights every single day for women's rights, both in my professional life and in my personal life, I'm just as angry, sad and filled with despair as you are.

The negative emotions we feel toward the election — and will feel for quite awhile — are completely and wholeheartedly justified.

But in order for all of us to really heal, I truly believe we must try our best to understand what led Trump to the presidency.

The reality is, we're living in two Americas.

I've personally lived in both of them.

There are parts of America that are like New York City, where there's diversity and well-educated people. And then there are other parts where you're lucky if you see two minorities in your high school and the influence of faith takes over.

The majority of Trump supporters live in the latter.

But some of the widest margins of victory for Trump came from white voters without a college education. People who live in the suburbs and small, rural cities also made up the majority of Trump's votes.

Forget breaking the election results down by state — look at all the COUNTIES who voted red.

Blue is clustered around the cities, and those places are indeed more densely populated — but you can not ignore the prevalence of Republican support.

These people voted for Trump because they think he'll get them jobs. Their panic over jobs is a result of the ever-widening gap between the rich and the poor, which has all but evaporated the middle class. Middle America is experiencing true economic turmoil.

And we can't blame these people for believing Trump will help them.

As Michael Lerner writes in the New York Times, they've been taught to believe that they can succeed if they work hard enough. Because of this, they're blaming themselves for their failures. They feel ashamed.

Educated people know success is about more than just work ethic. But, as Lerner also notes, middle America is currently vulnerable and needs answers. And Republican leaders are really good at convincing these people that they're failing in the economy not because meritocracy is a myth, but because immigrants and people of color are stealing their jobs.

The result? Racism and hostility.

So we have to understand that even though immigrants aren't actually taking Americans' jobs, poor people and the middle class feel very legitimately slighted by POC. They haven't been informed about the other forces that are really preventing them from succeeding in the economy.

People need to be educated if they want to learn about the real forces that stop them from succeeding in the economy. And the more educated you are, the more liberal you do indeed become.

But colleges, especially elite ones, are more expensive than they've ever been.

So you can't wholly blame some US citizens for not being able to get a college education. Taking out loans for college is a huge risk that lower-income families simply can't afford.

What makes their so-called ignorance even worse is that minorities — blacks and Hispanics in particular — don't really populate small-town, rural America.

This means lots of white, working-class people don't interact with POC as frequently as we do — if at all.

Lots of white, working class people don't interact with POC as frequently as we do, if at all.

They don't have as many opportunities as we do to learn that people of other ethnicities are actual human beings just like them, not the scary "other" who steals their jobs as the Republican party claimed.

Outside of learning about other ethnicities from Republican leaders, the only POC most of middle America really gets to see are the ones in movies and TV shows.

And we all know that the media does a pretty shitty job of fairly and accurately representing marginalized groups.

So you've got a huge percentage of the country that isn't worrying about the very real, very life-threatening issues marginalized groups would face under a Trump presidency because they're not exposed to those groups and don't understand their humanity.

A huge percentage of the country isn't exposed to marginalized groups and don't understand their humanity.

As a result, they voted, naturally, for who they thought would make their lives better: a man who promised to help them get what they deserved from job-stealing, lazy, over-sexualized, criminal minorities.

Faith sometimes interferes with political decisions more than it should.

Christians who attend religious services at least once a week made up over half of Trump's votes. About 80 percent of Trump supporters in particular were evangelical Christian.

Though many of us don't participate in religious services or traditions, it's important to not underestimate the power that it can have on people who inhabit small-town America.

The Pew Research Center found that religious influence is declining. But many Americans — specifically Republicans and others who lean right — feel like this is a bad thing, and wish religion would have more of an impact in politics.

As we know, some religious groups, specifically under Christianity, can be rather unforgiving when it comes to same-sex relationships, issues of the transgender community and women's rights.

But we can't dismiss religion entirely.

Just because we don't agree with particular religious beliefs or think they're only filled with hate doesn't mean that we can disregard it entirely the way liberals tend to do.

There are undeniable benefits to religion. Churches participate in charity work to help the poor, create tight-knit social communities that gather weekly and make small-town people feel like they're a part of something greater than themselves.

Sure, there are crazy Bible thumpers out there. But most religious people are just looking for somewhere to belong and answers to all their scary questions, like what happens after you die.

Most religious people are just looking for somewhere to belong and answers to all their scary questions.

It's also really, really hard to undo the religious ideals you had been indoctrinated with for your entire life — even and especially the damaging ones.

Personally, the only thing that helped me undo all the Catholic teachings screaming in my ear whenever I wanted to have premarital sex was a strong, overwhelming desire to become a more open-minded person and a college education, during which I had a constant flow of constructive, intellectual conversations inside and outside the classroom with people willing to challenge me.

White, working and middle class Americans are simply not exposed to the kind of learning experiences required to undergo such a massive ideological change... nor do they necessarily even want to undergo such a change in the first place, since they see lots of benefits to religion.

Just like you and me, Trump supporters have been living in their own information bubble.

Trump supporters are not willfully ignorant. It sounds a lot like I'm saying that they are. But that's not true.

Just like you and me, Trump supporters are living in their own information bubble.

They are reading their local conservative newspapers, watching their own conservative cable news stations and hand-picking conservative opinions that affirm their beliefs to populate their Facebook feeds.

They're doing exactly what you and I do, only with ideals that align with theirs.

And while we dismiss them as racist, red-necked, uneducated idiots, they dismiss us as entitled, arrogant liberals who think we know better because we went to the fancy schools.

Nobody listens to anybody.

At the end of the day, we can't claim to be tolerant and then dismiss people who are feeling just as vulnerable as we are.

Race and gender are two incredibly valid social groups to stand up for, but class is equally as important.

And, whether we understand it or not, religion is a predominant way that many Americans classify themselves and should be taken just as seriously.

Acknowledge the realities of people who are literally nothing like us will test the limits of our empathy. But it is only then that we can truly move our country towards becoming united once again.