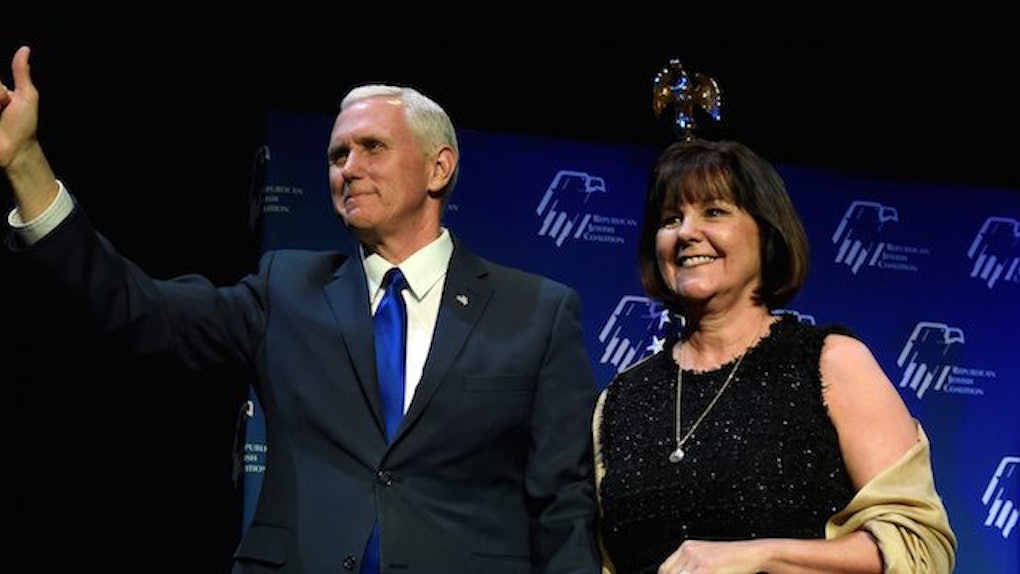 Mike Pence Won't Eat Alone With Women Other Than Wife

Vice President Mike Pence refuses to eat alone with a woman who is not his wife, a Washington Post piece uncovered.

The piece was a profile of Karen Pence, the vice president's wife of 32 years. The detail about eating with other women actually came from a 2002 interview with The Hill.

In that interview, Mike Pence said he does not eat alone with a woman who is not his wife, nor does he attend events with alcohol without Karen there.

This revelation has sparked a debate across the internet about the respectability of that particular life choice.

Pence, who is anti-choice, anti-LGBTQ+ and newly in support of Trump's "not-a-Muslim-ban" Muslim ban, chooses to avoid women who are not Karen, whom he calls "Mother," apparently because of their Evangelical faith and out of respect for their marriage.

This choice, however, relies on a whole bunch of sexist, harmful beliefs.

If he's saying he does not have dinner alone with other women because it will inevitably ruin his marriage, it's problematic.

This relies on the stereotype, often espoused in Christian teachings, that women are evil vixens who must be avoided at all costs because they're just there to seduce you. (See: Eve making Adam eat the apple.)

It also relies on the stereotype that boys will be boys and just can't help their dang selves when it comes to women. This is a major factor in rape culture.

That whole idea that he needs his wife around to keep him in check again reinforces the idea that men can't help themselves without women, rule-followers, to stop them. (See: Madonna-whore complex. Women can either be Madonnas -- like Karen -- or whores -- like the women he refuses to be alone with because TEMPTATION.)

Pence's apparent refusal to lay his eyes on other women inherently erases women in his life (who are not his mother or Mother).

By not meeting alone with women, Pence is pushing women out of his personal and professional life.

That's dehumanizing. He is saying only women who are his wife are allowed to be spoken to in private conversations (or with alcohol around).

The internet has debated this heavily.

It can be shady for a married man to have a meal alone with a woman who is not his wife.

But there are also a million reasons why he would. Like, for example, if they are friends, or business associates, or classmates or humans who both eat.

Pence's apparent choice to not eat with non-Mother women is also kind of illegal.

Married men and women often are alone together for professional reasons.

As Clara Jeffery explains on Twitter, Pence's marriage rule would mean women do not have the same opportunities that men do to work with Pence, whether that's as advisors, reporters or appointees.

Two years ago, the Atlantic looked into male members of Congress who refuse to be alone with female staffers. This happened sometimes under office policies -- to avoid scandals and whatnot.

Well, except that those rules would cross into discrimination in the workplace, which is illegal.

Citations: Karen Pence is the vice president's 'prayer warrior,' gut check and shield (Washington Post), Why Some Male Members of Congress Won't Be Alone with Female Staffers (The Atlantic)