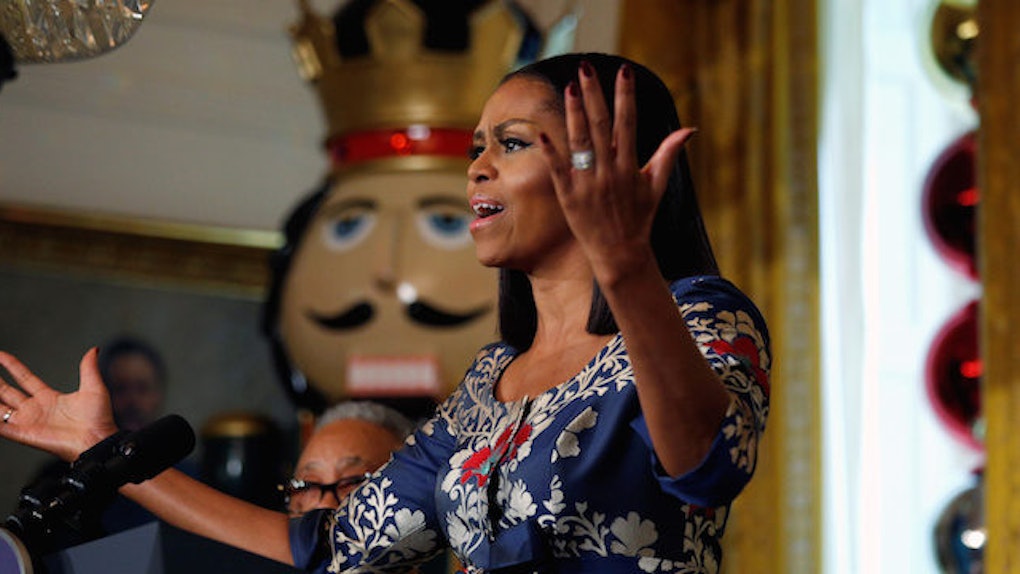 How Melania Ends Up With Michelle Obama's Social Accounts

Michelle Obama, walking angel, is leaving her post as first lady on January 20, which makes me want to cry for days and desperately grasp onto her gorgeous gown trails, begging her to sit next to me and tell me everything's going to be OK every day for the next four years.

Unfortunately, however, I doubt that I will be near enough to Obama to grasp at her gown.

So I'm looking at the next best option, which is following her social media accounts and tweeting a variation of "you're my only hope" at her every day.

But in order for me to do that, I need to know her social media handle.

We already know that all the official White House accounts — @POTUS, @FLOTUS and all — are being handed over to Donald Trump and his team.

With those accounts gone, is there still going to be a way for us to creepily tag and stalk Obama?

As I transition from first lady to private citizen, I plan to keep reaching out to people from all backgrounds — particularly young people — through social media.

I see my social media accounts as a fun, accessible way people can get to know me directly.

It's true! That is exactly what social media should be used for! Instead of, you know, inciting nuclear war!

Her Insta and Snap will remain MichelleObama.

So not to worry, Obama will not be abandoning us. She is keeping up with the promise she made in her final speech as first lady,

Know that I will be with you, rooting for you and working to support you for the rest of my life.

Hopefully this will be done, in part, by her responding to my daily tweets asking for affirmation.